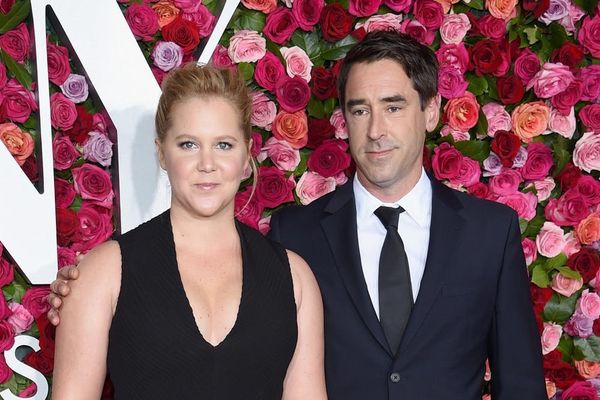 Congratulations are in order for Amy Schumer! The I Feel Pretty star sneakily revealed — in an announcement in her friend’s Instagram Stories, no less — that she’s pregnant and expecting her first child with husband Chris Fischer.

Schumer teased the news first on her own page, sharing a Photoshopped picture of her head on Meghan Markle’s body and Fischer’s head on Prince Harry’s body. (The Duke and Duchess of Sussex are expecting a baby of their own next spring.)

“About to announce some exciting news on @jessicayellin insta page,” Schumer captioned the image. “Please follow her for up to the minute #newsnotnoise, she breaks down what’s really going on. She agreed to post a lil noise today for me! Follow her and VOTE!!”

Yellin shared the news in her Instagram Stories, but not before first giving the announcement a little context. “So, I’m not in the business of making voting recommendations, but these are the recommendations of Amy Schumer, one of the most consistent and earliest supporters of News Not Noise,” she said in a video. “Now read all the way to the bottom — you’ll see there’s some news down there. Congratulations, Amy.”

The next slide was a list of Schumer’s recommended congressional and gubernatorial candidates, including Stacey Abrams for Georgia governor and Beto O’Rourke and Heidi Heitkamp for US Senate. Buried at the very end of the list was this simple note: “I’m pregnant-Amy Schumer.”

I'm in the business of covering news not noise, but sometimes some happy noise comes along and you just have to share… Congrats @amyschumer!! 👶👶👶https://t.co/vewOWx5nel pic.twitter.com/RT5jjtbtOn

Schumer and Fischer married in an incredibly stealthy secret wedding on February 13, 2018. The couple exchanged vows at a house in Malibu, with guests including Jennifer Lawrence, Jennifer Aniston, Larry David, David Spade, and Judd Apatow.

“The best part is just having a partner and being like ‘I got a team,'” she told E! News of married life in April. “It was just me and [my dog] Tatiana and now it’s cool, you got someone to go through life with together — that you love and you want to be partnered up with.”