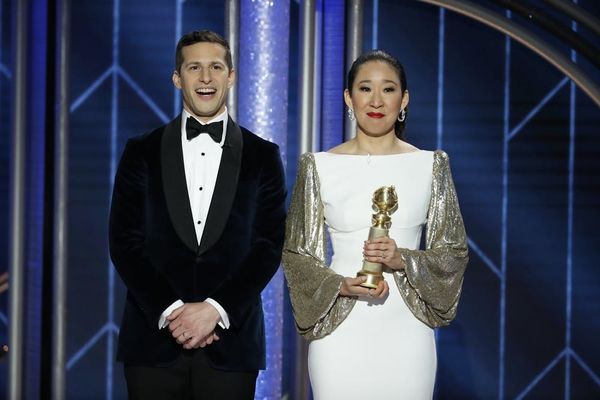 Andy Samberg and Sandra Oh’s “best friend handshake” might have been a little rusty before they hosted the 2019 Golden Globes together, but by the time Oh won her trophy award for Killing Eve, the BFF bond was real. Samberg said he even cried tears of joy for her backstage.

“She’s so warm and magnetic, and I fell so into her energy that we were all backstage when she won,” Samberg told Jimmy Fallon on The Tonight Show on Tuesday, January 9.

“They were like, ‘Sandra Oh,’ and I was like, ‘Yeah!'” he recalled, using an excited, celebratory voice. “I started crying. I was like, ‘She’s been working on this for the last four days I’ve known her!’ I gave her boyfriend a big hug and was like, ‘We did it!'”

Samberg and Oh had not spent much time together before the 2019 Globes, but they pulled off a hilarious and wholesome opening and several other memorable bits throughout the show.

“Sandra Oh is the best person on earth,” Samberg told Fallon. “We met briefly, we presented at the Emmys, and then we spent the last week-and-a-half working on the Globes, but we didn’t know each other that much. But we just sort of liked each other so much from that one experience, we decided to go for it because they asked.”

The Brooklyn Nine-Nine star wasn’t the only one left in tears by Oh’s big night. Not only was she the first person of Asian descent to host the show, but she also became the first Asian actor to win Golden Globes in multiple categories when she won Best Performance by an Actress in a TV Series, Drama, for her role in Killing Eve.

Her acceptance speech had viewers — and even Oh herself — in tears as she joyfully thanked her Killing Eve family, and her family-family, giving a sweet shout-out to her supportive parents, who were in the crowd.

What do you think of the newfound friendship between Sandra Oh and Andy Samberg? Let us know @BritandCo!