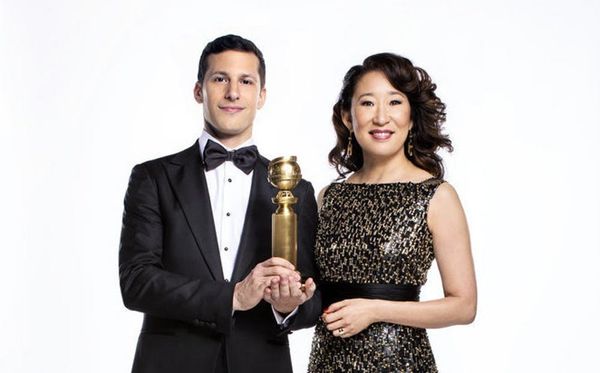 With the 2019 Golden Globes less than a week away, co-hosts Andy Samberg and Sandra Oh are busy perfecting their act for the big night. Judging by the promos NBC released this weekend, they’ve got the humor down pat — but their “best friend handshake” might need a little work.

“Hi, I’m Andy Samberg, and this is my best friend Sandra Oh,” the Brooklyn Nine-Nine actor says in one promo. “Best friend handshake!”

The two then proceed to try out a number of different moves, none of which are in sync, until finally Oh just punches Samberg’s open hand. “Best friends!” he yells triumphantly, as Oh interjects, “We just met.”

In fact, the two have appeared together at an awards show once before. They pulled off a funny bit at the Emmys in September, when they presented the award for Outstanding Directing for a Comedy Series to La La Land, and then some guy Oh dated in high school, and finally to Amy Sherman-Palladino for The Marvelous Mrs. Maisel.

Judging by the second promo NBC debuted on December 30, we can expect more funny bits on Sunday. In the short clip, Samberg and the Killing Eve star take turns saying different words — like “celebrities,” “accolades,” “gold,” and “slap fights” — that may or may not have anything to do with the Golden Globes.

The 2019 Golden Globes air Sunday, January 6, at 8pm ET/5pm PT on NBC. Check out the full list of nominees here, and check back on Sunday for live coverage of all the highlights.