Step Aside, Barbie, We’re All About This Natural-Hair Doll 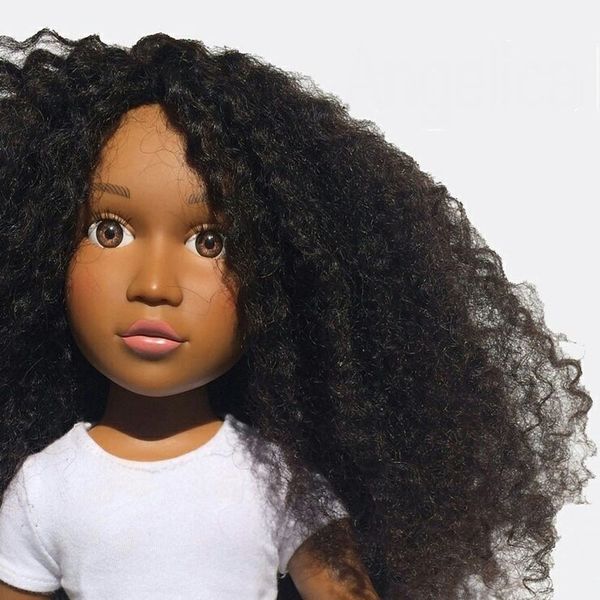 As most of you know, we have a love/hate relationship with Barbie. Sure, we grew up combing her hair and zooming her around in that cute pink convertible, but we have come to realize that almost everything about her promoted the stereotypes we know and loathe today. Luckily, for the next generation, dolls are beginning to resemble real people, and we couldn’t be more pumped. Our latest doll crush? Angelica, the doll with African American features AND natural hair.

For mother Angelica Sweeting, the Angelica Doll was the answer to a problem that came up for her as a parent. After realizing how much of a need there was for a doll that looked more like her daughter and less like Barbie, Sweeting got to designing this doll and started a Kickstarter. The Angelica doll sports naturally curly hair that can be styled and washed. “We twisted, bantu knotted, combed, brushed, blew out, curl wanded and re-washed the hair,” Sweeting wrote on her Kickstarter page. They wanted to make sure it would withstand months and months of play.

This Kickstarter initiative started as a movement to “let girls know that they are beautiful” and is now fully funded (with more money rolling in, it seems) with the help of hundreds of backers. After production, Angelica will be shipped out (hopefully by the end of the year) with a cute outfit and a miniature styling kit for her tresses. The Angelica doll, Sweeting says, is just the first step to a line of naturally beautiful dolls she wants to create in the future. She wants to introduce new and exciting entrepreneurial careers for young girls, like journalism, public relations, software development and engineering. You go, Angelica!

Are you contributing to this campaign ASAP? Are there any other dolls you would like to see out there in the toy world? Let us know in the comments below!

(Photos via Kickstarter and Naturally Perfect)

Clarissa Wei
Clarissa Wei is a Los Angeles-based writer who knows a lot about Asian food and the hidden gems of her city. She lives in the San Gabriel Valley, and you can find her making dumplings from scratch or hiking the local mountains.
Curly Hair Ideas
Hair
Curly Hair Ideas Kickstarter