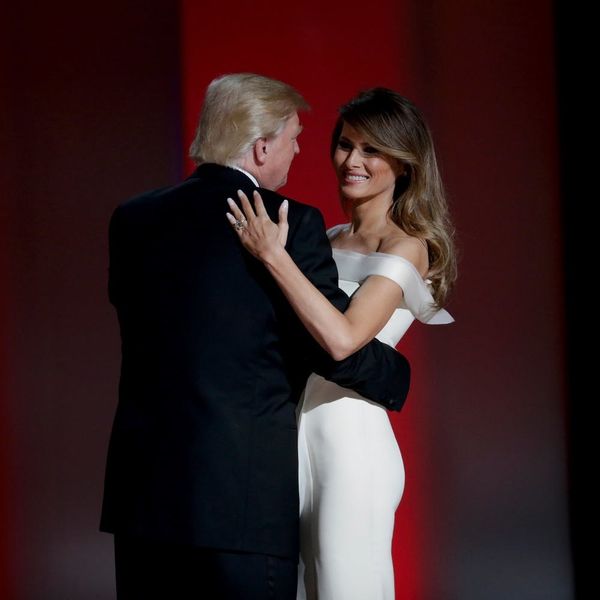 “This is not normal.” Those are the four words that have become a mantra of the activists against the Trump administration. While some media sites like Fashionista and Jezebel have taken a stand against posting fluff pieces on the Trumps, others like Peoplehave come under fire for normalizing the first family. Now, with a new statement from Anna Wintour, Vogue has fallen into the latter category.

“We have a tradition of always covering whoever is the first lady at Vogue and I can’t imagine that this time would be any different,” the editor-in-chief told The Wall Street Journal(via Refinery 29). It’s a fair point, given that all eyes are on Melania Trump and that the fashion community has LOTS of opinions on dressing her.

Not everyone is on board though. Social media users were quick to slam the fashion bible for its decision.

Teen Vogue is about to dye its hair black and refuse to speak at dinner. https://t.co/wpt8HFphFF

If Melania covers Vogue, I'm not talking to Anna Wintour until September

Others, however, didn’t see the harm in covering FLOTUS.

just saw a "Vogue is canceled" tweet bc Wintour said she might put Melania on the cover. but if we're still here after the kim/kanye cover..

This wouldn’t be the first time that Vogue has encountered backlash after featuring a first lady. In 2011, just before the outbreak of the Syrian protests (and consequent civil war), Vogue published a profile on Asma al-Assad, the wife of Syrian president Bashir al-Assad. At the time, President al-Assad was already on watch by the global human rights community for several violations, including a torture and detention program that killed many political enemies — none of which was ever mentioned in the Vogue profile. At first, Vogue editors defended the piece, saying that it was a way of “opening a window into this world a little bit.” But after weeks of vitriol and backfire, they removed the piece from the website.

Within his first three weeks in office, the president has issued an incendiary travel ban (which a court of appeals unanimously refused to reinstate), thrown relations with foreign allies into a frenzy, approved construction on two highly protested pipelines, entered murky ethical waters with his family and businesses, fired the attorney general who said she would not uphold his ban, blocked funding for foreign aid that provides abortions to those in need, triggered a counter-terrorism strike in Yemen that killed civilians, ordered a media blackout of the EPA, told the country to “pray” for The Apprentice‘s TV ratings and had his counselor break the law by endorsing his daughter’s clothing line during an interview.

What do you think of Vogue’s decision? Let us know @BritandCo!

Cailey Rizzo
Cailey is a junkie for all things pop culture. She studied journalism and English literature at SUNY Purchase, then continued studying French cinema and literature at Paris IV Sorbonne. She currently lives in New York where she can often be found singing '70s music at karaoke bars.
Politics
Style News
Politics
More From Style News