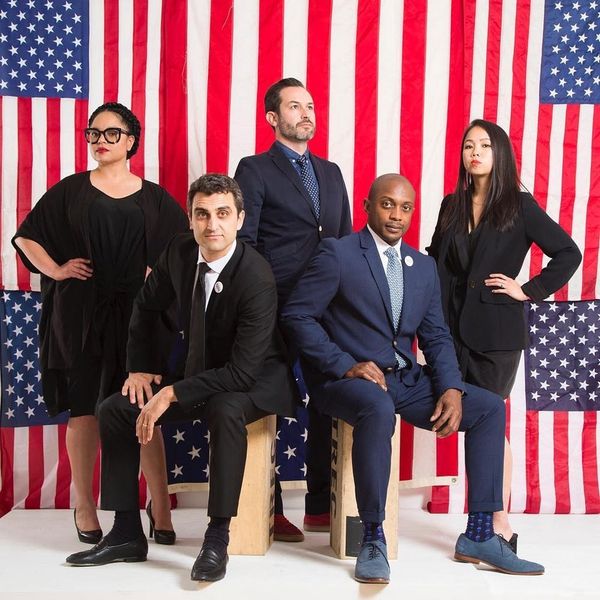 There’s no denying President Donald Trump has a bit of a weakness for airing his feelings on Twitter, especially when he’s feeling slighted. Now one of New York City’s most popular art museums, MoMA PS1, might just find itself the latest victim of Trump’s tweets, thanks to their new partnership with a controversial political organization.

MoMA PS1 has opened its artist residency to For Freedoms, the first artist-run political action committee (PAC). The PAC’s new residency, dubbed Laboratories for Freedom, launches with an exhibit of the group’s contentious billboard, which superimposes President Trump’s campaign slogan, “Make America Great Again,” over a photo from the 1965 “Bloody Sunday” Selma march for civil rights.

Join us for a day of community and conversation. From 12-2PM in our galleries, artists Hank Willis Thomas (@hankwillisthomas) and Eric Gottesman (@ericgottesman) will join curator Peter Eleey to discuss their new artist residency at MoMA PS1, Laboratory For Freedoms, which begins with the display of a billboard that For Freedoms created and posted in Mississippi during the election, and materials relating to its reception. As always, admission is pay-what-you-wish for all, and free for NYC residents. #ForFreedoms #ArtSpeaks

For Freedoms was created by Hank Willis Thomas and Eric Gottesman as a non-partisan organization that uses art to inspire civic engagement. In addition to the billboard, they’re also widely known for their exhibition of the “A Man Was Lynched by Police Yesterday” flag in response to police violence against African Americans.

One year ago, Hank Willis Thomas (@hankwillisthomas) and Eric Gottesman (@ericgottesman), created For Freedoms (@forfreedoms), the first artist-run political action committee, foregrounding a non-partisan agenda that has sought to use art to inspire deeper civic engagement. Starting tomorrow, MoMA PS1 will host For Freedoms for an artist residency, Laboratory For Freedoms, which will run through the first 100 days of the new Presidential administration, evolving organically over course of the project. Tomorrow from 12-2PM, artists Hank Willis Thomas and Eric Gottesman will join curator Peter Eleey at MoMA PS1 as part of a day of community and conversation at MoMA and MoMA PS1, featuring an expanded program of guided discussions. #ArtSpeaks #ForFreedoms

According to Art News, the group’s new residency is not an exhibition, but instead an opportunity for the PAC to host conversations about what their next steps should be now that the election is over. Fitting for their goal, the residency will run for the first 100 days of Trump’s presidency. To check out the residency for yourself and join in the conversation, visit MoMA PS1’s website for hours and admission information or follow @forfreedoms on Insta or Facebook.

What’s the next museum you’re checking out? Tweet us @BritandCo and let us know!