10 Baby Boy Names for Kim and Kanye, If Kim’s Predictions Are Right 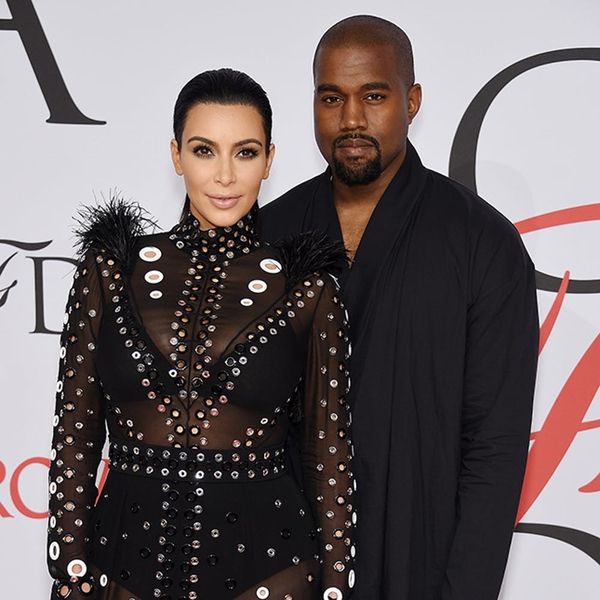 Social media maven Kim Kardashian teased us with a bit of speculative information about her pregnancy on Twitter last week, hinting that she may be carrying a baby boy. We love a good name game and everyone knows that she and Yeezy like to have fun with baby names too — after all, they did name their daughter North West, a move the public initially balked at and later grew to love. So, we’re throwing caution to the wind and brainstorming a top 10 list of potential names for North’s baby brother, assuming Mama Kim isn’t just stringing us along. And even if she is, we forgive her, because hey, this is fun!

1. South: Okay, we have to get this one out of the way, right off the bat. You’ve gotta admit that two cute kiddos named North West and South West would make a perfect set of siblings. And just think of all the SXSW events that kid could host once he got older!

2. Wild: While we’re out here on a limb, here’s another wild card (pun intended). If you’re going to have a sense of humor about your kid’s name, why not name him Wild West and pair it with a traditional middle name? That way, he can choose to ditch his given name and go by something more common if he ever decides his parents were bonkers for naming their kids after a matched set of global directions.

3. Noel: It could be really sweet to use Kim’s gender-neutral middle name as her son’s first. It’s a French name derived from the word noël, which means “Christmas.” Kim is said to be due around the holidays, and after all, who doesn’t love the gift of a tiny baby boy? Bonus points for alliteration, since Kim comes from a sisterhood of “K” names. Maybe North and Noel could carry on the family tradition.

4. Omari: Kanye happens to have a pretty cool middle name himself; doesn’t “Omari West” just have a nice ring to it? Egyptian in origin, it means “high-born” or “God the highest.” Since his parents aren’t exactly shrinking violets, we can see them giving him a strong name with a bold statement behind it.

5. Donda: In a Dravidian language called Telugu, Kanye’s late mother’s name, Donda, refers to a bright red fruit. The name is said to mean “strong, determined and stubborn.” Those three words definitely describe this couple, and naming their son in memory of Kanye’s mom would be a touching and sentimental gesture.

6. Roc: Kim and Kanye aren’t known for going the conventional route when it comes to much of anything, so naming their first son after the label that gave Kanye his start in the music business would be fitting. He was hired as a producer for Roc-A-Fella Records back in 2000, starting with Jay-Z’s The Blueprint. It’s worked out well for him ever since, so why not extend those good vibes to his son’s name as well?

7. Andante: With such a musical dad, a musical name might not be out of the question. Andante is an elegant Italian word referring to the moderate speed or “walking pace” of a piece of music. And since Kim and Kanye were married in a stunning ceremony in Italy, they’ve clearly got a thing for the place itself.

8. Sagittarius: Rumored to be due around the holidays, baby boy West will likely arrive under the zodiac sign of Sagittarius. We don’t know if his parents keep up with their horoscopes or not, but the name is interesting, creative and anything but ordinary, just like his mom and dad.

9. Dash: It’s eccentric, it’s cool and it’s memorable — three characteristics that also match his big sister’s name. It’s also the central syllable in “Kardashian,” which is why Kim, Kourtney and Khloe named their boutique that very word. Now that they’ve moved onto other ventures, maybe North’s baby brother can pick up the mantle and run with it. (See what we did there?)

10. Bruce: It’s been an emotional year for Caitlyn Jenner, who’s been making great strides on the trans community’s behalf and working to address critical issues like teen suicide and violence against trans men and women. Wouldn’t it be the loveliest gesture ever if her first grandson were given her childhood name in her honor?

What’s your favorite name prediction? Spill in the comments section below!

Amy Lynch
Amy is a freelance writer and editor, telling the stories of progressive people and projects that move the world forward. Her work has appeared on The Hairpin, Refinery29, Citygram and more, and she's developed content for the likes of Alternative Apparel, Milkshake and Silvercar. She lives, works and plays with her fiancé and their dog, Bogey, in the weird, wild heart of Austin, Texas.
Celebrity Baby
Baby Names
Celebrity Baby Celebrity Baby Names Kardashians
More From Baby Names