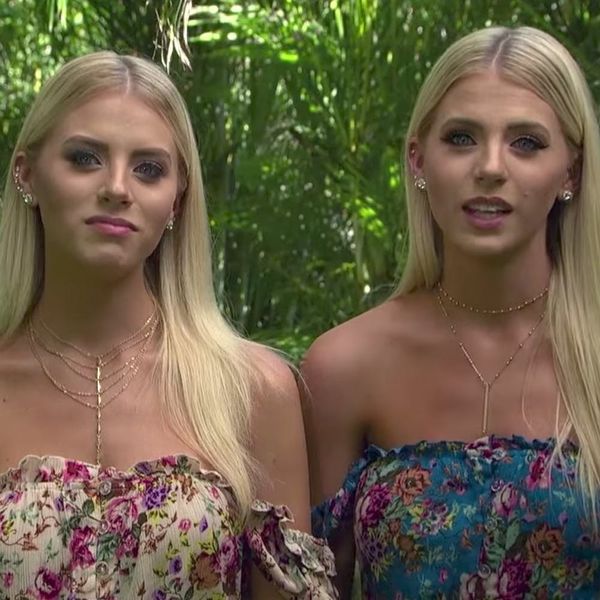 Paradise is almost lost for the purgatory dwellers of Bachelor in Paradise and after Kristina’s dramatic exit on last night’s episode, Dominique is certain that no one can disrupt the foundation of these rock solid relationships. Surely, with three episodes left, there’s not going to be anyone else coming in to mess up all of these potential televised weddings, right?

Because purgatory has no quota, Jaimi (Nick’s season) arrives to bring a little intrigue to keep everything interesting. Her date card is a hot commodity and she could give it to a man or a woman. ABC’s really getting into 21st-century territory here. Ultimately, she chooses Diggy to go have a boring date and make out a little. Protect your heart, Dominique!

Emily and Haley (Ben’s season), the blonde twins from your worst nightmare, come in to raise hell and definitely not find true love. I’m not even going to try to tell them apart even with their assurance that they have different eyes, noses, boobs, and… pelvises.

One of the Evil Twins has her eyes set on Derek but quickly realizes that he’s chained to Taylor and asks probable personal injury attorney and definitely not serial killer Jack Stone to go with her. The other Evil Twin asks baby bro Dean out twice but he’s not ready to step out with someone other than D-Lo now that Kristina is out of the picture. Phew. Keep it drama free for once, baby bro. Evil Twin, left with no other option, asks Tickle Monster on a date but threatens to “drop his ass” if he tickles her. Love hurts when it doesn’t tickle, I guess.

If this late-game shake-up is too much for you, you’ll be happy that we get to spend a very small amount of time with Taylor and Derek who are about as in love as it gets. With Derek’s profane faux-pas behind him, these two are communicating and making out more than ever.

As trashy as it gets on this show, we lose sight of the fact that it’s probably really difficult to have enough privacy to full on bone. Scallop Fingers stands to get out of Paradise still a virgin, especially given the chivalry and politeness of Jack Stone, so anything really can happen here! Cool. That was a nice break talking about healthy relationships. Let’s go back to the monsters.

The Evil Twins are set to go on a date with guys they think of as “douchebags”, but probable personal injury attorney Jack Stone is having second thoughts about spending any time with these monsters. Tickle is on deck and ready for abuse but Jack ultimately decides he needs more time with Scallop Fingers, who at least isn’t going to treat him like garbage. He tries to break it to them nicely and they respond by screaming and throwing scallops before leaving Paradise. Were they really only there for, like, two hours? Their flight must have been longer!

With the trauma of the twins whirlwind visit behind us, it’s time to get serious about love, y’all. The lease is up on these beach dorms soon and these bozos have to get engaged or be stuck loveless for the rest of their lives! Can Raven and Adam get serious before it’s too late? Should Amanda let Robby’s overpraised hair play stepfather to her children? Will Scallop Fingers leave a permanent mark of the scallop on Jack Stone’s heart? Chris Harrison (UGH) appears to let these wretches know that it’s their last day on Paradise. It’s time for fantasy suites, breakups, and eternal bonds, folks. Everyone’s heart is on the line! The stakes have never been higher! Kill or be killed!