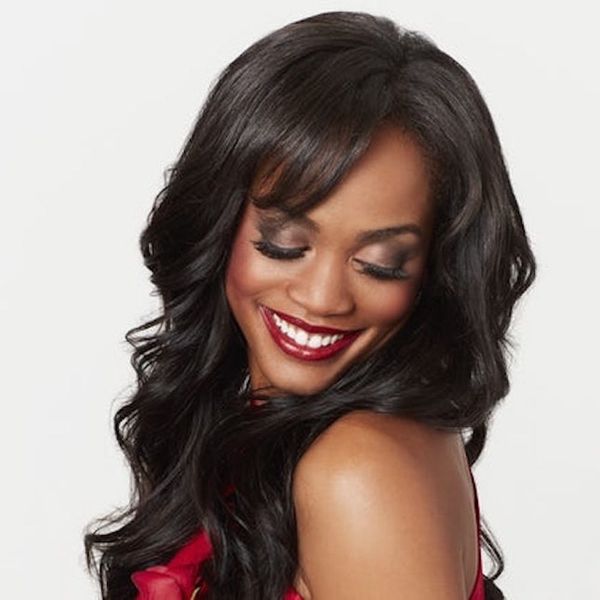 At the end of last week’s The Bachelorette, Rachel Lindsay exited the mansion to hear out DeMario after she sent him packing following the revelation that he had a girlfriend. Rachel’s generally sweet nature and openness to listening to DeMario had me staring in horror at my television screen this week, worried that she would take him back, but she isn’t having any of his smooth talk and dismisses him yet again. Good for you, Rach! Only 22 (exasperated sigh) dudes left — including your fiancé!

And what winners some of these dudes are. She has brief one-on-ones with many of them before the rose ceremony. Some show what they can do with their hands. Alex plays with a Rubik’s Cube while talking to her; somehow she finds this endearing instead of totally rude. American Psycho Jonathan puts on enormous prop hands to make Rachel laugh, which begs the question: Did this guy bring these in his suitcase, or does the mansion just have a room of things like enormous hands, creepy dolls, and penguin costumes? If the latter, I hope the room has plenty of toys for Copper, who is such a good boy.

Sex-positive aspiring drummer Blake won’t shut up about how much he hates Whablergh, but this backfires as he, Whasnooze, and pretty-but-bland salesman Jamey do not receive roses at the ceremony. Blake goes ballistic on Whavfefe outside the mansion, claiming that he is the reason Blake didn’t get to stay. Whatever, dude. Hope you enjoy all of that aspirational drumming.

Rachel takes vacuumer Alex, intense kisser Bryan, former child Fred, American Psycho Jonathan, incredibly pretty Peter, and Urkel-to-Stefan stand-in Will to a taping of The Ellen DeGeneres Show. DeGeneres insists that the guys remove their shirts and give her entire audience lap dances, which will give Rachel a solid idea of who’s here for her, I guess. Alex gets most into it, eventually grinding on a grandmother. Later at dinner, former child Fred moves to put his past with Rachel behind them by kissing her, but she sees him more as forever child Fred and eliminates him on the date. Cold move, Rach, but I get you.

Next, Rachel goes on a solo date with education software developer Anthony. They ride horses down Rodeo Drive and into multiple stores. I suppose it’s not a health code violation, since none of these places serves food. It’s pretty incredible that these stores can accommodate two huge horses. One of the horses relieves himself in the store and Rachel says, “So Beverly Hills.” Is it really? I want to go to this “Beverly Hills.”

Rachel then takes doll owner Adam, sledgehammer owner Brady, creeper Dean, bad dancer Eric, likely personal injury attorney Jack Stone, Pretty Boy Pitbull Kenny King, potential villain Lee, and Bryce (who went viral last month for a transphobic comment in his ABC bio) on a mud wrestling date with her friends from The Bachelor. Despite Kenny’s wrestling background, he gets exhausted and Bryce wins the mud wrestling challenge. Eric, meanwhile, shows a good deal of vulnerability as he claims to be “extremely emotionally available.” Rachel responds well to this, but Iggy, Bryce, and Lee challenge Eric, which leads him to scream at them before “To Be Continued…” pops up, portending a very emotional next episode with shouting, tears, and ohmygod there are still 18 bros left.

Tell us what you thought of the episode on Twitter @BritandCo.