Um, One Bachelorette Dude Showed Up in a Penguin Costume to Meet Rachel Lindsay 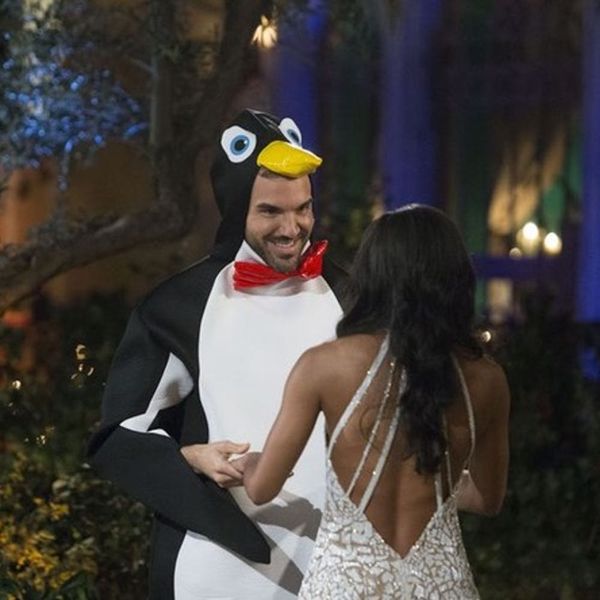 Fans of the Bachelor may have been beyond amused when Alexis showed up in a shark (or was is it a dolphin?) costume in an attempt to catch Nick Viall’s eye, but now it looks like this season’s Bachelorette Rachel Lindsay (who just happens to be engaged and “so in love”) has her own wild animal to deal with. That’s because one dude showed up to her meet & greet wearing a penguin costume. Yep, a penguin costume.

Romance fans, let us introduce you to Matt, the 32-year-old construction sales rep from Meriden, Connecticut. We can pretty much guarantee you won’t be able to forget his face when he shows up on day one in a full-on penguin outfit. And as silly as that sounds, the fact that his costume squeaks with every step is almost too much to handle.

Stepping up to Lindsay with a sincere, “How are you doing? You look unbelievable,” he already has the lady somewhat charmed as she greets him with a wide smile and whole lotta laughs. And though it starts out with a quirky twist, Matt’s sincerity shines through as he not only notes the Bachelorette’s love of the aquatic animal, but he adds that they’re also creatures that search out a “soul mate” to spend the rest of their lives with.

From Lindsay’s reaction to the surprising introduction, this fella may have made a questionable initial entrance, but he also may have won a few bonus points with his bravery. And penguins ARE wearing tuxedo colors, after all, so he’s more on-theme than Alexis was.

What do you think about Matt showing up in a (squeaky!) penguin costume? Let us know @BritandCo!

Desiree O
Desirée O is a ‘Professional Bohemian’ who loves anything and everything related to the arts, entertainment, and pop culture. She ADORES being a ‘Newsy’ for Brit + Co, covering all of the latest tidbits of awesomeness that you want to read about. When she’s not writing, she’s either making messy art, going on long adventurous walks with her camera, or poking around over at bohemianizm (http://www.bohemianizm.com/). You can find out about Desirée O and her work at http://DesireeO.com/ or follow her on Twitter @DesireeO.
Dating
TV
Dating
More From TV