Oscars 2015: The Most Dapper Dudes on the Red Carpet 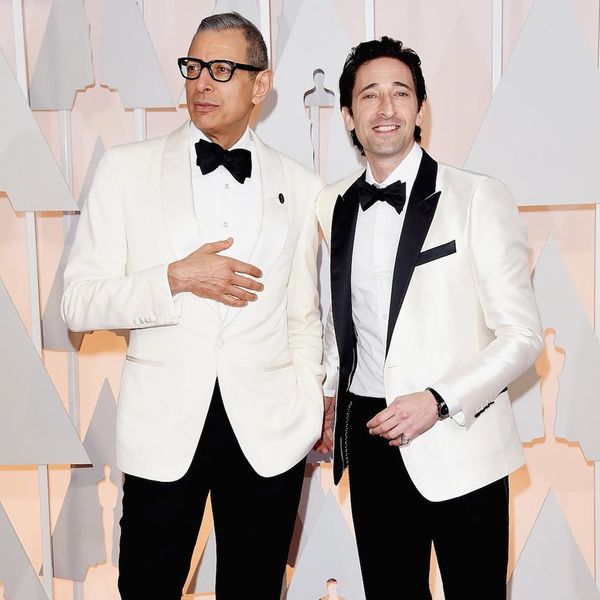 When it comes to all things red carpet we tend to focus mostly (okay, maybe entirely) on the ladies. Who they’re wearing, what hairstyle they’re rocking, you get the jist. But how about those fellas? Yes, many of the tuxedos look the same, but some dudes put real originality into those red carpet ensembles (anyone remember Elton Castee, who shaved his leg hair into stripes back at the Grammys?) The leading ladies at the Oscars have had their moment in the sun and so now we’re putting a spotlight on the men. Here are 10 folks who looked like a regular Don Draper at this year’s Academy Awards.

1 + 2. Neil Patrick Harris: As host of the show, Neil Patrick Harris had to step it up a notch. He walked the red carpet with his husband, David Burtka in this charming silver and gray tux made custom by Brunello Cucinelli. Are these two just the cutest couple or what? (photo via Jason Merritt/Getty)

4. David Oyelowo: Possibly our favorite look of the night, Selma star David Oyelowo looked utterly dapper in a Dolce & Gabanna tux in a slightly richer version of Pantone’s color of the year. (photo via Jason Merritt/Getty)

5. J.K. Simmons: Step aside youngins, the 60-year-old had a great night not only award-wise (he walked away with one of those little gold men for his role in Whiplash), but also in the sartorial sense. Of course, that hat looked awesome, but also take note of his adorable pocket square that matched his wife’s dress. (photo via Jason Merritt/Getty)

6. Matt McGorry: The How to Get Away With Murder star rocked a look that seems quite simple at first, but take a closer glance and notice the detailing in that Brooks Brothers jacquard jacket. (photo via Kevork Djansezian/Getty)

7 + 8. Adrien Brody and Jeff Goldblum: It looks like last night was the boys’ turn to take on the white and black trend we’ve been seeing all award show season. We must say, it’s definitely working in their favor. Adrien rocked Dolce & Gabbana while the legendary Jeff Goldblum opted to sport Tom Ford. (photo via Jason Merritt/Getty)

9 + 10 + 11. The Lonely Island: The hilarious musical trio looked anything but silly on last night’s red carpet. (photo via Frazer Harrison/Getty)

12. Eddie Redmayne: The Theory of Everything star had a pretty great night and not just because of that handsome midnight blue Alexander McQueen tuxedo. He also walked away with the best actor award. If there was an award for most adorable speech, we might just have to give that to him as well. (photo via Jason Merritt/Getty)

13. Jared Leto: We’ll be honest, a lavender tuxedo with shiny white shoes isn’t going to look dapper on everyone, but if anyone is going to pull of this ’80s-tastic tuxedo designed by Givenchy it’s going to be Jared Leto. (photo via Jason Merritt/Getty)

14. Ansel Elgort: Watch your back, Eddie Redmayne. The Fault in Our Stars leading man wasn’t nominated for any awards, but we’re going to guess he won over a whole lot of teenage hearts in this navy blue Prada ensemble. (photo via Jason Merritt/Getty)

15. Miles Teller: With a role alongside Zac Efron in That Awkward Moment and a leading spot in the Oscar-nominated Whiplash, we’re hoping to see this breakout star all over the red carpet from now on – especially if he keeps sporting slamming tuxedos like this one designed by Prada. (photo via Jason Merritt/Getty)

What was your favorite look from last night’s red carpet? Drop us a line in the comments below.

Cortney Clift
Cortney is the senior writer and special projects editor at Brit + Co. She typically covers topics related to women's issues, politics, and lifestyle. When she's not buried behind her computer you'll find her exploring New York City or planning her next big adventure.
Oscars
Party
Oscars Red Carpet