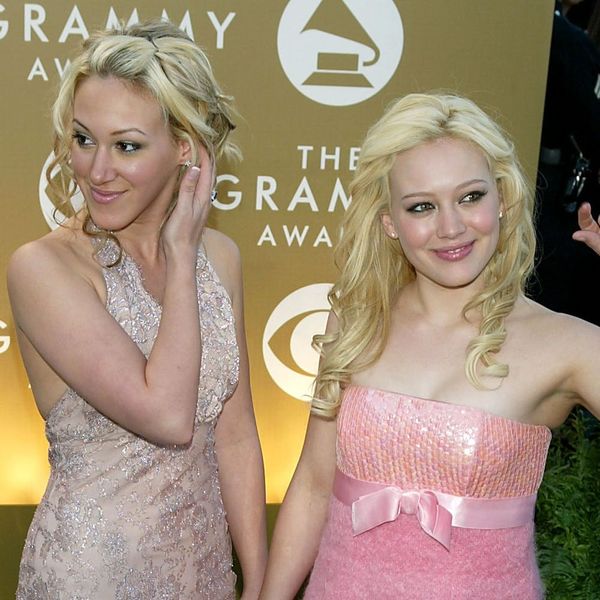 When it comes to the red carpet, it’s been ALL about the throwbacks as of late. Mandy Moore recently channeled herself at the SAG Awards with a gown inspired by one she wore 20 years prior, and Chrissy Teigen just had a chuckle at her own Grammys look from 10 years prior. Consequently, we’ve been inspired to dig deep into the Grammys red carpet vault, and boy, are we so glad we did: Scroll through to check out 23 photos that will have you feeling nostalgic AF!
Hilary and Haylie Duff: Hilary Duff, is that you!? We barely recognize the Younger star in her sweet-as-pie lace and sequin bubblegum pink mini frock and bright platinum locks from 2004. (Photo via Kevin Winter/Getty)
Kim Kardashian West: These days, she’s one of the biggest stars in the world, but in 2009, she was pulling hosting duty for the show's red carpet in a silver-white Tony Maticevski organza dress and chunky satin Christian Louboutin heels that had us flashing back to prom. (Photo via Frazer Harrison/Getty) 2009
Maria Menounos: The newly married TV personality was a walking billboard for ‘00s trends back in 2004 with this beige corset top and asymmetrical lace skirt combo and bejeweled belly button. (Photo via Kevin Winter/Getty)
Fergie: Fergie, meanwhile, was all about that fringe life in this sliced up white minidress with a plunging V-neck. (Photo via Kevin Winter/Getty)
Christina Aguilera: The “Genie in a Bottle” singer accepted her first-ever Grammy for Best New Artist in a silver jeweled Versace dress with an asymmetrical hem. (We’re sensing a pattern here…) (Photo via Brenda Chase/Getty)
Taylor Swift: Swift’s 2008 custom Sandy Spika dress was less edgy badass and more country darling. (Photo via Frazer Harrison/Getty)
Gwen Stefani and Gavin Rossdale: The No Doubt crooner seemed to pay homage to an ‘80s Madonna with her 2005 getup, which consisted of a see-through black halter-style gown, a teased curly blonde updo, and an oversized necklace. (Photo via Kevin Winter/Getty)
Brooke Hogan: Hogan went for bold in 2005 courtesy of a bright orange strapless number complete with a ruffled train (because ‘00s), diamond baubles, and a dramatic smoky eye. (Photo via Kevin Winter/Getty)
Carrie Underwood: Still fresh off her 2005 American Idol win, Underwood walked the carpet at the 2007 Grammys in a glitzy metallic Don O’Neill creation we can’t quite picture her in today. (Photo via Frazer Harrison/Getty)
Paris Hilton: For 2009’s big event Hilton donned a jaw-dropping pixie cut and a super short, colorful sequin and cutout creation that had us saying, “That’s hot.” (Photo via Frazer Harrison/Getty)
Justin Timblerlake: Timberlake may play the part of an outdoorsy woodsman in his videos these days, but back in 2004, he was a fresh-faced talent in a sharp suit and charming pink undershirt. (Photo via Kevin Winter/Getty)
Britney Spears: Sporting a super curly coif and a form-fitting plain red chiffon gown in 2002, Spears was a far cry from the Vegas showgirl we know and love today. (Photo via Vince Bucci/Getty)
Nicki Minaj: Understated, Minaj’s hair-raising 2011 leopard getup was not — We can’t look away! (Photo via Larry Busacca/Getty)
Chrissy Teigen and John Legend: Teigen herself poked fun at the overt spray tan she paired with her slinky white bodycon gown back in 2008, as well as Legend’s “Count Chocula”-esque collar. (Photo via Frazer Harrison/Getty)
Rihanna: Even back in 2007, RiRi was a style queen, giving off some serious sass in a one-shoulder Roberto Cavalli frock with a daring side cutout and an edgy lob. (Photo via Frazer Harrison/Getty)
Mandy Moore: Little did we know when Moore was walking the Grammys carpet in 2007 in this floor-length belted number with a busy print that she’d go on to become one of 2018’s biggest style stars. (Photo via Frazer Harrison/Getty)
Miley Cyrus: Cyrus looks like a whole new person than she did on the 2008 carpet, having evolved quite drastically from her days as long raven-haired beauty. In fact, she now says she regrets most of her red carpet ensembles from 2008 to 2013. “The Grammys were rough and tough for me,” she quipped to Cosmopolitan. (Photo via Frazer Harrison/Getty)
Destiny’s Child: We saw green for days in 2001, when Beyoncé Knowles, Kelly Rowland, and Michelle Wiliams walked the carpet in variations of the same eye-catching cutup ensemble. (Photo via David McNew/Getty)
The Jonas Brothers: With a possible “Joe bro” reunion underway, we can’t believe the transformation the three young men have undergone in nine years — Check out Joe’s emo hair! (Photo via Frazer Harrison/Getty)
Katy Perry and Russell Brand: Perry was angelic in Armani in 2011, wearing ACTUAL wings as an accessory to her flowing silver sequin gown and sporting a very different hairstyle than the blonde pixie she’s been repping since early 2017. (Photo via Jason Merritt/Getty)
Nicole “Snooki” LaValle: With a fierce tan, super dark locks, and a purple bandage dress, LaValle was peak “Snooki” at the 2010 awards. (Photo via Jason Merritt/Getty)
Miranda Lambert: Lambert’s bouffant ‘do and one-shoulder turquoise gown with a ruffle-tier bottom gave a clue to the ‘date of the 2010 show she was attending. (Photo via Jason Merritt/Getty)
Justin Bieber: Selena Gomez’s man was just a wee lad of 16 in 2011, showing up to his second-ever Grammys carpet dressed to impress in a cream suit and black bowtie. (Photo via Jason Merritt/Getty)

Which throwback was your fave? Sound off over @BritandCo.

Which throwback was your fave? Sound off over @BritandCo.

Nicole Briese
Nicole is the weekend editor for Brit + Co who loves bringing you all the latest buzz. When she's not busy typing away into the wee hours, you can usually find her canoodling with her fur babies, rooting around in a bookstore, or rocking out at a concert of some sort (Guns N' Roses forever!). Check out all her latest musings and past work at nicolebjean.com.
Celebrities
Red Carpet
Celebrities Grammy Awards Nostalgia Red Carpet