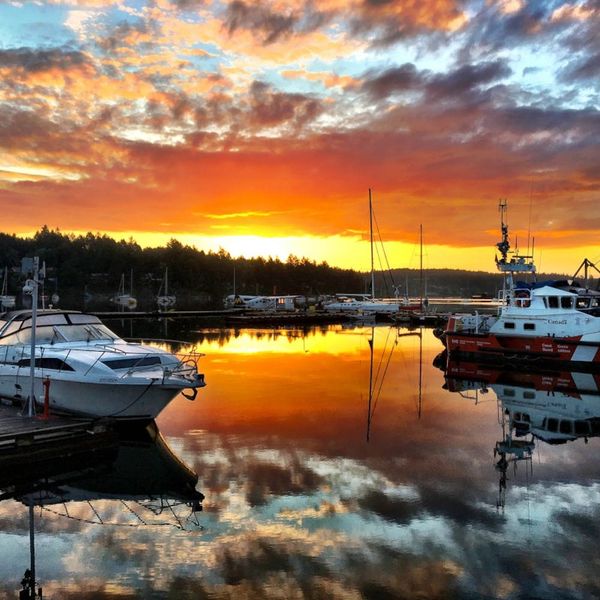 Looking for an idyllic island escape but more interested in a destination you can road trip than flying far afield? Check out these (sometimes under-the-radar) North American island destinations that offer charm and attractions aplenty beyond the typical sand and surf. Whether you’re into nature, gourmet cuisine, or exploring intriguing North American culture, these islands won’t disappoint.

If running with wild horses along a rugged ocean coastline is your idea of fun, you’ll want to make plans to visit the very under-the-radar island of Assateague. Split between Maryland and Virginia, this 37-mile-long gem is home to hundreds of wild horses descended from herds that have survived on the island for centuries, believed to have originated from horses that swam to the island from a 17th-century shipwreck off the coast of Virginia. When you’re not horsing around, you can enjoy other activities like swimming, kayaking, camping, and hiking. (Photo via Laura Seigel Powell)

Ask a Canadian to name their favorite island escape, and there’s no doubt that Salt Spring Island will be at the top of the list. Not only is it blessed with some of the warmest weather in Canada, but it also has everything you could want in an island destination: picturesque seaside towns, wineries, craft distilleries, and stunning hiking trails. What makes Salt Spring especially unique is its strong creative artist community; despite hosting just a little over 10,000 inhabitants, it has more than a dozen galleries and studios. Be sure to also buy some of the island’s famous goat cheese and attend “Flower School” at Alchemy Farms. (Photo via Jon Suk)

It may be hard to believe, but Hawaii does indeed still have some hidden treasures yet to be discovered. This understated, 140-square-mile island is ideal if you’re looking for a rustic, relaxed, off-the-beaten-path paradise. The island has only 30 miles of road and one major town, Lanai City, with not a single chain store or mega-mall to be found. If you’ve ever wanted an excuse to rent a Jeep, thanks to the island’s plentiful dirt roads and rough-and-tumble terrain, now you have it. What Lanai lacks in pavement and tourists it makes up for in beaches, with lovely Hulopoe Bay being the standout. Of special note for cat lovers: The Lanai Cat Sanctuary, home to 600 spayed and neutered rescued felines, is one of the most highly rated attractions on the island. (Photo via Hawaii Tourism Authority)

Think you know all abooout Canadians, eh? Not likely! Dive into a unique facet of Canada’s fascinating French-speaking Quebecois culture on this one-of-a-kind island. Located in the middle of the Gulf of St. Lawrence, the Magdalene Islands (as they are known in English) are a lush archipelago rich in white-sand beaches and amazing red cliffs. Locals are legendary for their warm hospitality, and visitors will enjoy delicious seafood, local artisans, hikes, and cycling routes. Best of all, if you visit in March, you can see hundreds of thousands of harp seals give birth to their pups on nearby ice floes in the gulf. (Photo via Jean-Guy Lavoie)

Consistently making top-10 lists as one of America’s must-see islands, Hilton Head oozes modern southern charm. What makes it so special is that it has an enviable balance of bucolic beauty, outdoor activities, and contemporary offerings like world-class cuisine and spectacular spas. See for yourself how Hilton Head acquired its culinary acclaim by spending the day discovering the island’s eateries, including Hudson’s, Lucky Rooster, and modern soul food at Ruby Lee’s. The island also lays claim to a vibrant craft beer and liquor scene. When your appetite is finally sated, indulge in a treatment at one of Hilton Head’s exquisite spas. (Photo via Hudson’s Seafood House on the Docks)

Spend just a few hours on Orcas Island, and you’ll see why the breathtaking spot made The New York Times list of 52 Places to Go in 2019. The name is your first clue to some of what you’ll find on this charming island: whales, whales, and more whales! Orcas can be seen year-round; in fact, the island is said to be the best place in the world for killer whale watching. For those more into food than fins, Orcas still has you covered. The San Juan Islands are nicknamed the “gourmet archipelago,” and there’s no end to the fantastic fare you’ll discover thanks to their seed-to-table, tide-to-table, and farm-to-table ethos. Seafood lovers shouldn’t miss Buck Bay Shellfish Farm, while Hogstone’s serves wood-fired oven pizza, and companion restaurant Ælder features four- to 12-course tasting menus. (Photo via Barbara Marrett)

There’s something about Alaska that stirs the imagination the way few other states can. Kodiak is Alaska’s largest island (and the United State’s second biggest), and its endless array of verdant forests have earned it a nickname as the Emerald Isle of North America. It’s an adventurer’s dream with outdoor activities aplenty, including kayaking, sailing, fishing, bird watching (eagles being the favorite), and hiking. Of course, the real stars of the show are the island’s incredible Kodiak brown bears, the largest bears in the world. The best time to see the mammoths is in July, August, and September, and there are numerous professional guide companies that can lead you on a once-in-a-lifetime bear trek. (Photo via Discover Kodiak )

Whether you’re looking to reconnect with nature, your friends and family, or yourself, pint-sized Pender is the perfect place to step away from the world for a few days. Though friendly deer seem to outnumber the human populace on this tiny oasis, you’ll have plenty to keep you busy. This is where you’ll find one of Canada’s most award-winning wineries, Sea Star, as well as artisanal cidery Twin Island Cider. If you’re looking to work out your body rather than your palate, visit Dog Mermaid for a kayaking excursion or play some “Frisbee golf” on the local course. Stay overnight in an updated Airstream trailer to toast the starry night from your personal hot tub. (Photo via Sandra MacGregor )
Sandra MacGregor
Sandra MacGregor has been writing about travel, food, and wine for nearly a decade. Though her home base is Canada, her wanderlust has led her to pack up and move around the globe, including living in Paris, France; Seoul, South Korea; and (most recently for two years) in Cape Town, South Africa. Follow along on her adventures with Instagram @sandragetssidetracked and Twitter @MacgregorWrites.
inspiration
Travel
inspiration Vacation
More From Travel