14 Movies to Watch With Your BFFs on Galentine’s Day (or Anytime!) 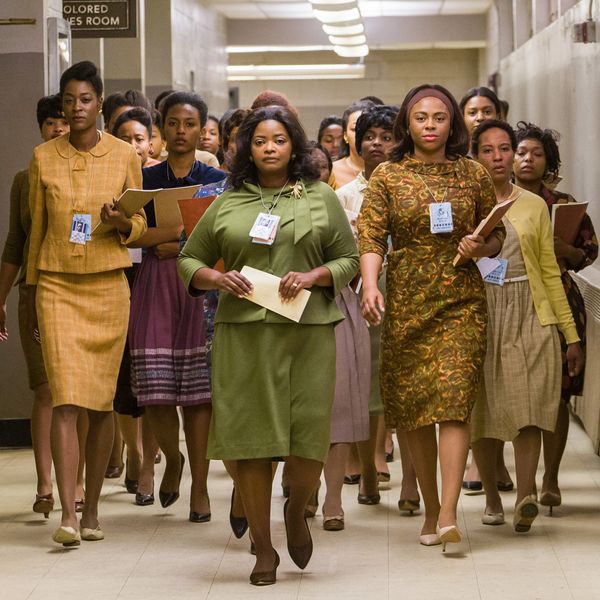 We love movies about women supporting women any day of the year, but especially on International Women's Day. And these movies are all about the undeniable power of female friendship. Click through to see our favorite #squadgoals films for a girls' night in.
Hidden Figures: Octavia Spencer, Taraji P. Henson, and Janelle Monae are at their best and most inspiring in this Oscar-nominated film, a true story about three Black women — Katherine Johnson, Mary Jackson, and Dorothy Vaughan — who changed the space race for NASA in the 1960s. (Photo via 20th Century Fox)
The First Wives Club: This 1996 movie — about three women seeking revenge on the ex-husbands who left them for their younger mistresses — is worth a watch just for Bette Midler, Goldie Hawn, and Diane Keaton singing "You Don't Own Me" as they strut down the street in all-white outfits. (Photo via Getty Images)
Now and Then: When you think back on the best and most important friendships in your life, chances are they're the ones with your girlfriends when you were all on the cusp of coming of age. Now and Then depicts this precious, confusing, and formative time so perfectly. (Photo via New Line Cinema/Getty Images)
Bridesmaids: A modern classic if ever there was one. This comedy — featuring a stellar cast including Kristen Wiig, Maya Rudolph, Melissa McCarthy, and Rose Byrne — nails all the best and worst parts of female friendship. Also, the Wilson Phillips sing-along at the end is everything. (Photo via Universal Pictures Home Entertainment)
Romy and Michele's High School Reunion: More than 20 years after its release, this 1997 comedy — about two besties who fake fabulous lives at their high school reunion — is still one of our favorites to watch and rewatch. It also features one of the best and funniest dance scenes in any movie, ever. (Photo via Touchstone/Getty Images)
The Sisterhood of the Traveling Pants Movies: We're still holding out hope for a third film in the franchise, but for now, we'll continue to enjoy the first two, which gave us the real-life sisterhood that is Blake Lively, Alexis Bledel, America Ferrera, and Amber Tamblyn's friendship. (Photo via Scott Gries/Getty Images)
Beaches: Stock up on tissues before you hit play on this tearjerker starring Bette Midler and Barbara Hershey. (Photo via Touchstone/Getty Images)
Girls Trip: Two words — Tiffany Haddish. Need we say more? If the answer to that question is yes, here are three additional reasons to watch: Regina Hall, Queen Latifah, and Jada Pinkett Smith. (Photo via Universal Pictures)
Miss Congeniality: Though the movie's classic "ugly duckling" tropes aren't perfect, undercover FBI agent-turned-beauty pageant contestant Gracie (Sandra Bullock) always has her girls' backs — and we could all use a tough-talking, pizza-scarfing, butt-kicking Gracie in our corner. (Photo via Warner Bros. Pictures/Getty Images)
The Pitch Perfect Movies: The original Pitch Perfect is still the best, in our opinion, but you and your BFFs could have an aca-awesome girls' night in with all three films in the trilogy. (Photo via Universal Pictures)
Thelma & Louise: Susan Sarandon and Geena Davis are the epitome of "ride-or-die" besties in this Oscar-winning 1991 film. Bonus: It also stars a young Brad Pitt. (Photo via Metro-Goldwyn-Mayer/Getty Images)
Ghostbusters: Leslie Jones, Melissa McCarthy, Kristen Wiig, and Kate McKinnon kick some serious supernatural butt in this reboot of the '80s franchise. The ghosts of NYC are no match for these four. (Photo via Sony Pictures)
Frozen: While most Disney movies are centered around romantic relationships, the complicated but ultimately loving sisterhood between Anna and Elsa in Frozen makes it stand out as a Galentine’s must. (Photo via Disney)
Frances Ha: When Frances (Greta Gerwig) and her best friend Sophie (Mickey Sumner) grow apart because only one of them decides to grow up, it's devastating. But Gerwig and Sumner's portrayal of that deep, special — and sometimes really hard — kind of love that only female friends share is also so real and so affecting that it almost makes it okay. (Photo via IFC Films)
Allison Takeda
Galentines Day
Movies
Galentines Day Movies