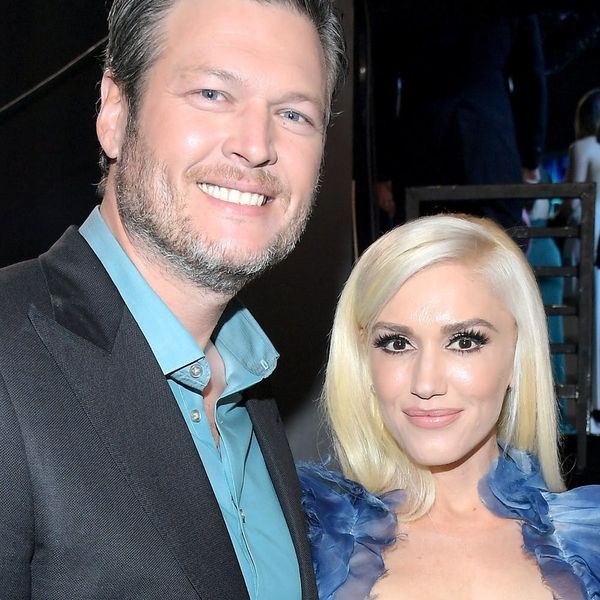 Blake Shelton may be People’s Sexiest Man Alive of 2017, but back in his high school days, he was a grinning young man with a mullet, a pair of specs, and what appeared to be a missing tooth or two, to boot. Unlike Kaia Gerber’s yearbook photo (which was, predictably, quite similar to lookalike mom Cindy Crawford’s), The Voice judge’s headshot proved he definitely had his awkward phase. It was no matter to girlfriend Gwen Stefani, though.

The country crooner’s main squeeze was appearing on The Ellen Show this week when the talk show host sprung Shelton’s photo, along with her own, on the No Doubt frontwoman.

“Do you think, years ago, if y’all would’ve met, you would’ve got together?” DeGeneres asked. Though the mother of three initially said no, she seemed to reconsider after seeing their yearbook photos side-by-side. “I feel like it actually does work out,” she quipped. “I mean, look at those two pictures. It is perfection!”

The “You Make It Feel Like Christmas” songstress also sounded off on the controversy surrounding her man’s big magazine title, saying, “I feel totally responsible, because he’s so not that person, he doesn’t even like to do a photo shoot, like you can never convince him to do it, so he just called me, he’s like, ‘They want me to do this,’ and I’m like, ‘YOU SHOULD TOTALLY DO IT!’”

Stefani, 48, also addressed all the haters out there, saying, “When you think about it, what defines sexy?” she asked. “It’s really so personal. For me, it’s that big ‘ole heart and that sense of humor, and … he doesn’t even take himself seriously, he’s just such an incredible person.”

“And that’s sexy,” the talk show host agreed, to which her guest responded, “To me it is!”

Watch her interview in full below.

Do you have a hilarious yearbook photo? Tag us in it @britandco.

Nicole Briese
Nicole is the weekend editor for Brit + Co who loves bringing you all the latest buzz. When she's not busy typing away into the wee hours, you can usually find her canoodling with her fur babies, rooting around in a bookstore, or rocking out at a concert of some sort (Guns N' Roses forever!). Check out all her latest musings and past work at nicolebjean.com.
Celebrities
Celebrity News
Celebrities Celebrity Couples love Nostalgia