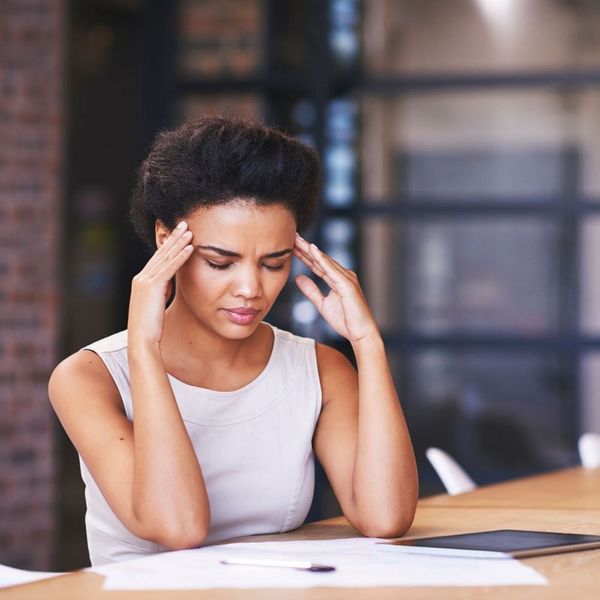 If your daily life is super stressful, you’ve probably tried just about every remedy out there, from stress relieving yoga poses to coloring books for stress reduction. Even though some studies say stress can actually be good for you, we all know it definitely doesn’t feel that way. Chronic stress can be completely debilitating, and seeing others deal with nerve-racking situations like it’s no big deal makes us wonder how they’re able to adapt so well. A new study published in Frontiers in Neural Circuits found that whether you crumble under stress or handle it like a boss is all in your head — literally.

To get some insight into the differences between people who handle stress well and those who don’t, researchers from universities in the US and the UK studied how mice responded to stressful situations. They found that brain activity in mice who showed helpless behavior in the face of stress was completely different from those who were resilient. In particular, the helpless mice exhibited significantly lower overall brain activity than the resilient mice.

Researchers also found that the helpless mice had less active prefrontal cortexes (the area responsible for organizing thoughts and actions), as well as less brain activity “in areas vital for processing emotion and motivation, areas important for defensive behavior, those key for stress coping and those associated with learning and memory.” So what does that mean for humans? Basically, if your brain is less active when you’re stressed, you won’t be able to process that stress very well, and you’ll effectively shut down.

There was one area of the brain that lit up more in helpless mice: the locus coeruleus, which has been linked to depression. Since stress is a cause of depression, the scientists explained in a news release that the study, “has the potential to guide future studies aimed at understanding the different roles specific brain regions play, as well as provide new targets for the development of new therapies.”

How do you think your brain handles stress? Tweet us your thoughts @BritandCo!

Kylie Kendall
Kylie is a freelance writer living in Ottawa, Canada. When she's not writing, you might find her scoping out all-day breakfast spots in her city or taste-testing every bottle of red wine under $10.
Healthy Living
Health
Healthy Living science study