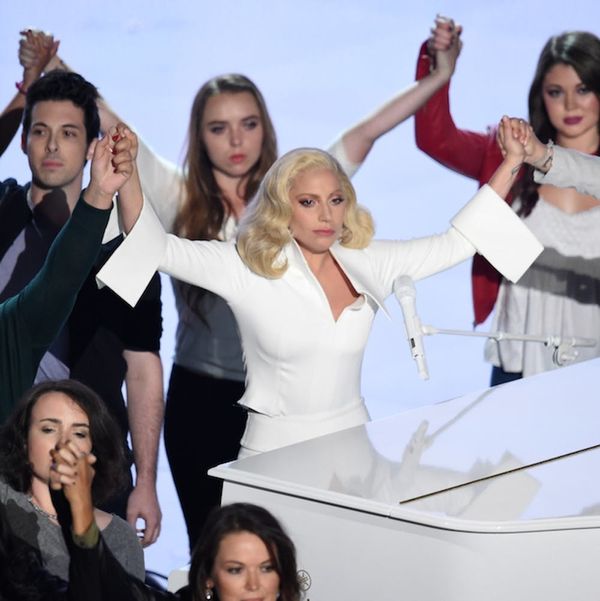 Last night’s Oscars felt more political than the standard award show fare we’re used to. It’s not necessarily a huge surprise, considering the #OscarsSoWhite backlash against the lack of African-American representation in the major categories. But still, we weren’t expecting Vice President Joe Biden — who was on-hand to introduce Lady Gaga‘s performance of Best Original Song nominee, “Til It Happens To You” from the documentary The Hunting Ground — to speak out on campus sexual assault and consent. And no one expected Gaga’s performance of the song to be accompanied by real life sexual assault survivors, hand in hand, with phrases like “Not Your Fault,” “Survivor” and “It Happened To Me” written on their arms.

#Oscars: Watch @LadyGaga perform 'Til It Happens to You', up for Best Original Song tonight https://t.co/cv45ZqaBaE https://t.co/dXWQvkAOvC

It was a moving moment, both on TV and in the theater, evidenced by the standing ovation, tears and this: Best Actress Brie Larson got up from her seat to hug every one of the survivors as they came on stage after the performance.

Then best actress fave Brie Larson gets up, hugs each, every one. #Oscars pic.twitter.com/OI3cFZaLtl

Yep. Crying all over again.

While it’s super easy to make digs at award shows (guilllllty), this year’s Oscars gave us a little something extra to talk about. And that’s not a bad thing.

How quickly are you running to see The Hunting Ground, if you haven’t already? Tweet us @BritandCo.