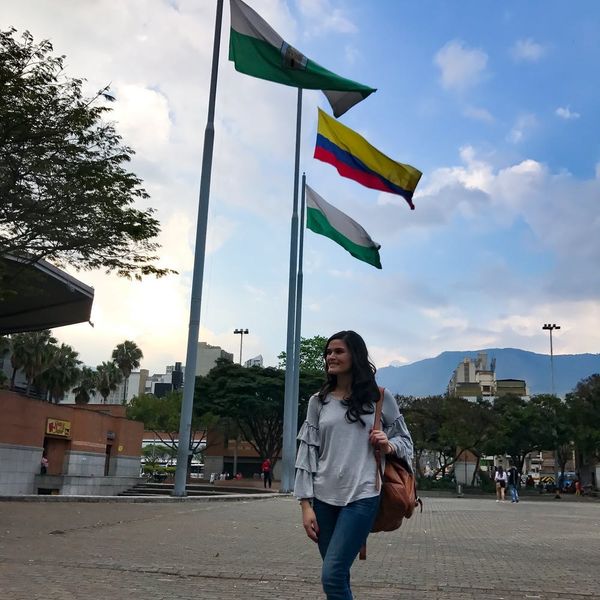 This article is part of our B+C Community Voices project. All of these stories come from our readers in response to our request for op-eds from different viewpoints. This one comes from Stephanie Granada, a freelance writer, child of immigrants, and advocate for the Hispanic community.

Soon after Donald Trump was elected president, I found myself at a thrift store in Utah. I was on a work assignment and hoping to stumble across one of those once-in-a-lifetime vintage finds you only acquire when you’re somewhere you never expected to be. But shopping for vintage is like chasing a legendary party night; if you go looking for it, you won’t find it.

After giving up the search, I needed directions back to my hotel. I approached an employee and got the impression he was deep in conversation with a colleague and didn’t hear me. As I started to ask someone else, I heard the first man holler “I said I’d be right with you.” Then a little softer, and now looking at no one in particular, “These f***ing Mexicans; no patience, none of them. I can’t wait ’til we build that damn wall!” It took me a second to register.

I’m not Mexican, so at first, I didn’t know who he was referring to. Had he directed the statement at someone else, I may have fired back. Instead, in shock, I walked out the door and jumped into an Uber. This is a mild example of the kind of behavior that we most feared would arise from Trump’s ascension to power. The blatantly intolerant agenda and offensive language that won him the election has emboldened many to let their discriminatory flag fly.

I really didn’t take the man’s statement to heart. Most kids who grow up as first-generation children of immigrants — illegal or not — deal with this in one way or another throughout our lives. And we learn early on that you can’t argue with ignorance. I was born here, though my family went back to Colombia soon after, and we returned seven years later. Technically, American, but culturally alien. That’s not an unusual recipe for first-generation kids.

A lot of the ways we get separated as other isn’t bad: the job we get because of our “unique perspective;” the photo shoots and school plays we fit the part for; the comparisons to knockouts like Penelope Cruz, Salma Hayek, and most laughably and far-off, (originally) blonde bombshell Sofia Vergara. But it’s those other moments that cut in ways we don’t even know are there until someone picks at the scab. Struggling through ESOL classes to learn English in the cruel world of elementary school comes back decades later when we have to give a speech in front of a crowd. Having friends joke about your family being Colombian cocaine dealers is only funny the first 10 times you hear it; then it makes your skin crawl. You feel like you’re betraying your heritage every time you chuckle, but worry you’ll come across as uptight otherwise.

The most difficult aspect may be the struggle we see in our parents and internalize over the years. We, as their kids, are grateful for their selfless pursuit for a better future and idolize their journey. But I can’t imagine it’s easy to relive moments when they were shuttled like stolen cattle through the night, having to ward off assaults, then landing in a foreign city where years are spent doing backbreaking work way below their abilities because, technically, they don’t belong here. There are entire years of my life I’m oblivious to because it’s too painful or embarrassing for my mother to talk about. And I get it; I get sad just thinking she lived through that kind of thing.

I’m not saying this is standard across the board. There are plenty of migrants who proudly and boldly share their stories. But on the other side, there is a large group that lives in shame of their quest for the American dream and fear that it could be taken away. Some do everything they can to get their families to fully assimilate, hoping to make things easier.

But even as we settle into our American lives, we can’t help but feel like we’re sometimes at a disadvantage knowing our peers have parents that can fund their progress and help navigate the financial and political system our own mothers and fathers are not privy to. I wouldn’t trade my upbringing for anything. In every area, I know it has made me stronger, harder working, and more empathetic to others, but I’d be lying if I said I feel 100 percent equal every day. The current political landscape doesn’t help.

During the Obama administration, diversity was celebrated. The 44th president instated the Deferred Action for Childhood Arrivals program granting DREAMERS (undocumented Americans brought to the country as children) educational aid and work permits. Stories of successful foreigners were exalted as triumphs, and slowly it became a badge of honor. Those who, before, may have been ashamed of their journey, were validated. They began to recognize that America is, after all, an immigrant country.

Of course, it’s all much more convoluted than that. The topic of immigration and discrimination has never been an easy one. We can only share what we live and know. What is clear to me is that in the last eight years, my immigrant family and friends felt a hope, safety, and acceptance that isn’t there anymore.

Currently, my cousin is in an argument with his girlfriend about whether they’ll get married. They’re 20 and wouldn’t even consider the subject if she hadn’t been born in Brazil. From the age of six, she’s known nothing but American life. She has no family in Brazil, and since her illegal standing has prevented her from going back, she has zero ties to the country. Yet, because her parents brought her here as a kid without papers, there’s a chance she could be sent back now, 14 years later. Her mother got married for papers, she reasons. Shouldn’t she?

I know I’m fortunate to have been born in Florida, but I’m not oblivious to the fact that’s just sheer luck. Had it been four months earlier, my birth certificate would say “Colombian,” and I’d be telling a different story. Or, no story at all. My chances of having successfully graduated college in the states and gone on to establish a career in journalism would have been nonexistent.

It all hits too close to home for many of us. The bright spot is that by having first-hand experience with these issues, we have stories to tell — our own and the ones of those around us. And this isn’t the time to be shy. It’s up to us to help secure the freedoms and opportunities we have benefited from, for generations to come.

What has been your experience as a first-generation American? Tweet us @BritandCo!