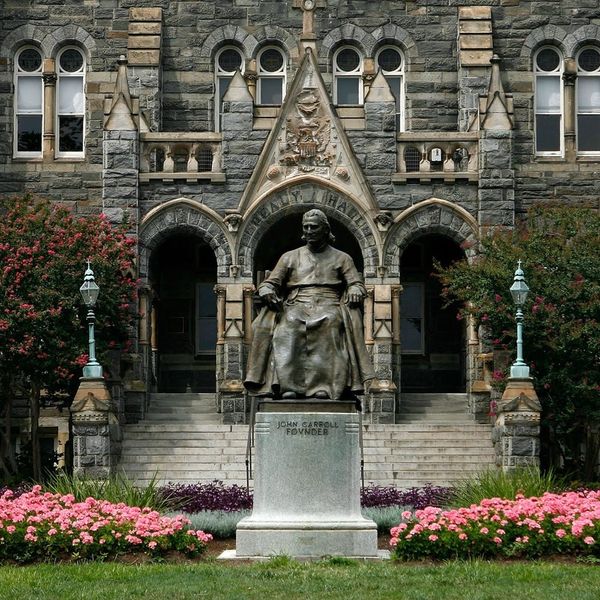 Cal Poly San Luis Obispo officials are calling for a state attorney general investigation after a new photo of a white student in blackface cropped up on a fraternity’s Snapchat channel. The incident came only a month after a separate photo surfaced of a different fraternity brother wearing blackface during a frat event where an all-white group of young men had dressed as “gangsters.”

“I am outraged,” Cal Poly President Jeffrey D. Armstrong said in a video address to students on Friday. “These vile and absolutely unacceptable acts cannot continue.”

And yet, acts like these do continue on campuses across America, and often with very little disciplinary action on the part of university administrations. Following the April incident, both the school and the fraternity’s national organization have suspended the chapter from participating in Greek life and school-sanctioned events, but the university administration seemed to focus more on damage control than consequences.

“This is nothing unusual,”author and lecturer Lawrence Ross told us about the lack of further discipline against the students involved. Ross has written two books on campus life and race issues, includingBlackballed: The Black and White Politics of Race on America’s Campuses, a book that focuses specifically on inter-race relations between students in academia.

“What happens is that a lot of the campuses [in the US] just basically don’t think about the issue [of racism or race relations] as being their concern until it actually happens but of course when it happens they go into action mode,” said Ross.

Ross explains that because most schools don’t have a mandate of anti-racism clearly written as school bylaws, with clear punishment against racist actions and racism at their institutions, schools respond to public instances of racism with a kind of predictable “action mode.” This ‘action mode,’ as Ross put sit, amounts to more or less a knee-jerk response to racially charged on-campus incidents, and Ross explains it usually happens in three stages.

Following last month’s blackface scandal at Cal Poly, ‘action mode’ involved the school placing the onus primarily on the student who donned blackface versus the racist premise of the event, calling it an “isolated event.” Then the school and student both minimized the costume, with the student saying he didn’t understand the history of blackface. Finally, the administration trivialized the event by saying that the student who donned the blackface costume won’t be expelled because they (wrongly) believe that blackface is protected under freedom of speech laws — federal laws that exist to protect a citizen’s right to speak out against the government without fear of arrest or abuse, not to protect people who say and do racist things.

Unfortunately, it is often those students who are on the receiving end of racist actions that have to respond and repair their school’s lack of action. At Cal Poly — which happens to be the least diverse of the 23 California State University schools, according to the LA Times — that’s the school’s small Black Student Union.

In a statement, the Cal Poly BSU condemned the lack of forethought and decisive action after the April blackface incident. “As a predominantly white institution with an overwhelming representation of those in the top 10 percent of the income bracket,” the statement reads, “Cal Poly has shown time and time again that it does not hold itself, its Greek organizations or its students accountable for their actions.”

The students’ statement reminds Ross of a woman he has worked with in political activist circles, who was also forced by administrative inaction to fight racism at her campus. “She said, ‘I didn’t come here to major in protests, I came to be an engineer, but I can do both,” Ross remembered.

Ross points out that with a lack of clear anti-racism policies in a school’s code of conduct, many non-white students are forced to do the legwork in changing how school administrators deal with incidents involving racism on campus. He points to a PEW study that found that 69 to 70 percent of white folks not only never talk about race issues, but also don’t engage in racial education on campus; 80 percent of non-white students, on the other hand, do.

“Further, the Black Student Union and its allies demand (bold, theirs) that Cal Poly San Luis Obispo administration publicly state their actions towards ending these frequently occurring, offensive events and maintain public records of their progress in these endeavors.”

Blackface and similar racist acts on university campuses do happen more frequently than people may remember. In 2015, UCLA students held a “Kanye West” party. In 2016, there were racist events at the University of Central Arkansas, the University of Oregon, the University of North Dakota, and others. In 2017, many schools preemptively issued statements reminding students not to don racist costumes. And shortly before the first Cal Poly blackface controversy, Walla Walla University administrators were on the defensive after photos captioned “Wakanda” were circulated of white students in black masks.

Though the students at Cal Poly have had all the school’s sororities and fraternities suspended indefinitely, it doesn’t resolve the issue at its heart — something Ross describes as the foundation of white supremacy.

“What’s interesting about it is context: too often white students say ‘I would never do that’ – white Americans are a subset, but the views of white people change when they see the volume of racists within their own same social strata,” Ross explains. “If I’m a ‘good person’ doing a racist act,” the thinking goes, “what is the systemic issue?”

And the systemic issue here is that white people don’t truly understand the damaging effect of blackface or Minstrel shows, the violence of which is woven into the history of many Black people today.

“When you see this [blackface in the modern era] it’s predominantly white college folks — they think they’re being edgy — but it’s one of the earliest racist tropes,” Ross explains. “That white people could denigrate black identity. Minstrel shows are based solely in the idea that Black folks are not human and should be mocked for even attempting to be.”

Unfortunately, at Cal Poly San Luis Opisbo, the events that happened over the last few weeks haven’t seen anything change for the better, either. Since the suspension of the Greek houses on campus, a number of racist fliers and phrases have shown up across campus, sparking fear and outrage.

“In no uncertain terms, the university abhors and denounces hateful and racist speech and actions — they are inconsistent with our values at Cal Poly,” University spokesman Matt Lazier said last month. “We must use this time to reject hate and come together as a community to foster a constructive dialogue and begin the healing process.”

An anti-racism policy is probably a good place to start.