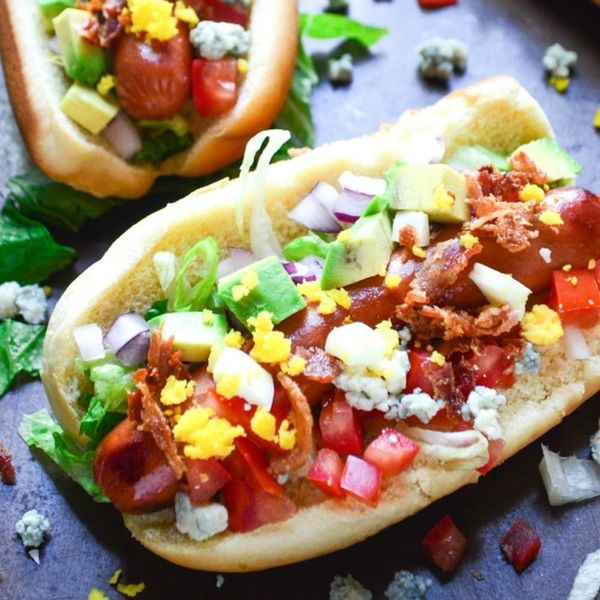 California is known for leading the curve in more than one area, including fresh food. Avocado recipes abound, the spiralizer was welcomed with open arms, and with all that sunshine, refreshing salads are the name of the game pretty much every day. But California-inspired foods aren’t just about the veggies. Burgers, burritos, and loaded fries can take their inspiration from the Golden State too. These 15 recipes put the best of California flavors in every bite.

Healthy sprouts and creamy avocado are a welcome addition to a classic Cobb. (via Erica Julson)

The club sandwich got a makeover. Heart-healthy avocado and a spinach wrap take this sandwich from diner classic to new American delight. (via Tastes Lovely)

Skip the mustard and relish in favor of these flavorful dogs. They’re loaded up with chopped tomatoes, bacon, blue cheese, and more. (via My Modern Cookery)

Lean turkey makes these pesto burgers a healthy indulgence. Add tomatoes, lettuce, and avocado for even more good-for-you flair. (via Free Your Fork)

Just a few simple upgrades take the wedge salad from boring steakhouse standby to fresh and exciting fare. Prosciutto steps in for bacon, the dressing is homemade buttermilk ranch, and, of course, it’s topped with creamy avocado. (via Little Broken)

Loaded with fresh ingredients, this California-style pizza gives the traditional stuff a run for its money. Veggie burgers, arugula, and pesto combine to make this a meal worth making. (via Whole and Heavenly Oven)

French fries are the secret to making a classic southern California-style burrito. They’re joined by carne asada and extra cheese in this filling recipe. (via Carlsbad Cravings)

Skip the tortilla and opt for these whole grain and veggie bowls instead. They’ll make you feel less stuffed than a big burrito, but still pack the same variety of satisfying flavors. (via Slow Cooker Gourmet)

The key to California cooking is to pair rich ingredients, like steak, with plenty of lighter, fresh items. Tossed with vegetables and greens, this salad is drizzled with an herb-filled chimichurri dressing so it tastes extra-bright. (via Joyful Healthy Eats)

You can make loaded fries a tad healthier with just a few tweaks. Baked potatoes instead of fried form the base, while grilled meat, guac, and a sensible amount of cheese and sour cream round out the plate. (via Downshiftology)

Easily made with shrimp, avocado, and rice, these bowls are much simpler than trying to deal with rolling nori. Best of all, they take less than 30 minutes to get on the table. (via Also the Crumbs Please)

It’s stereotypical, sure, but California cuisine just wouldn’t be complete without kale. It provides a hearty green base for these colorful taco salads. (via What’s Gaby Cooking)

Loaded into whole wheat tortillas, this is the easiest way to eat a ton of nutritious veggies. Grilled chicken and a hard-boiled egg add some protein to the mix, so you won’t feel hungry when you leave the table. (via With Salt and Pepper)

Skip the rice and get right to the good stuff with these low-carb sushi stacks. They’re made with a Greek yogurt Sriracha sauce that gives each bite a little kick. (via It’s Cheat Day Everyday)

Crunchy, creamy, and soft, these sandwiches are filled sprouts, avocado, and veggies, making them perfect for days when you’re in the mood for a lighter meal. (via Pickled Plum Recipes)
Justina Huddleston
Justina Huddleston is a food writer living in Los Angeles. When she's not busy writing, she spends her time in the kitchen creating both virtuous and decidedly junky vegan food. Buffalo chickpea pizza, anyone? She's also been known to eat a plain block of tofu or beans straight out of the can for lunch, but somehow those culinary adventures don't make it to her Instagram. You can follow Justina on Twitter or see what's cooking in her kitchen on her blog, A Life of Little Pleasures.
Dinner Recipes
Recipes
Dinner Recipes recipe roundup
The Conversation
Reviews:
More From Recipes