11 Caper Recipes That Will Make You Clean the Glass Jar 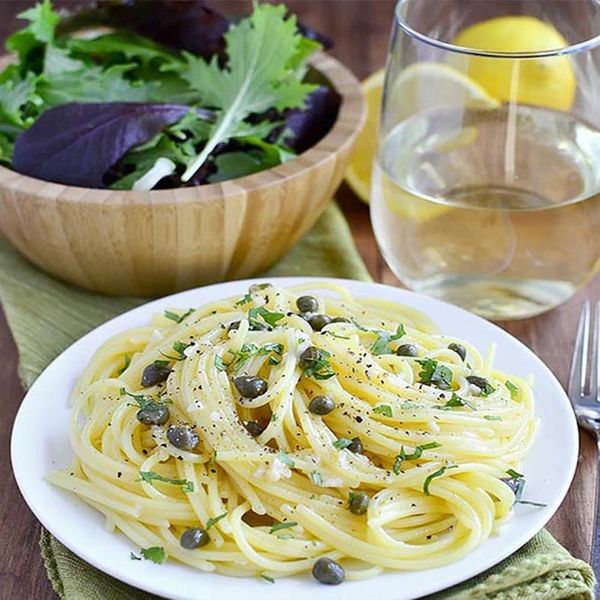 As far as we’re concerned, capers are absolutely non-negotiable when it comes to a toasted bagel with smoked lox and cream cheese. In fact, the more, the better. And while we know they taste good with salmon and other fish, it doesn’t mean we can’t use them in a spread for crusty bread. It’s actually the opposite. The salty pearl-sized plant buds pair with different protein and even vegetarian-friendly options too. Read on for 11 craveable caper recipes that will give that lone jar on the top shelf of your fridge a whole new purpose.

Fork into delicious simplicity in just one plate that’s prepared in less than 30 minutes. The burst of saltiness from the capers is a nice bonus too. (via Iowa Girl Eats)

Is there anything better than chicken breasts smothered in sauce? Just pair it with your favorite veggies and you have a showstopping meal. (via Taste and Tell)

This is a hearty salad that we are so here for. (via Happy Hearted Kitchen)

Pair the Brussels sprouts with a salty sauce atop a slice of buttery toast and your family will be begging for seconds. (via Coley Cooks)

Cool down with this simple salmon salad that is as flavorful as it is beautiful. Celery stalks and red onions give it a nice crunch, while the capers and lemon zest contrast. (via Simply Recipes)

Pasta might be known as comfort food, but with gluten-free noodles and a dollop of Greek yogurt, it’s easy to make a healthier version. (via Cotter Crunch)

Looking for a meal that is a burst of flavor and whips up in just 15 minutes? Grab your skillet, because those chicken breasts are going to get a lemony and zesty coating that you’re going to absolutely love. (via Two Purple Figs)

Cauliflower *seriously* does it all. This zesty and spicy recipe can be served as a side dish or an entrée for one of those days that you just can’t bare to cook. (via Blissful Basil)

This Paleo recipe is piled high with a mixture of capers and olives, which is sure to impress any crowd. (via The Grateful Grazer)

You simply can’t go wrong with this meal, because it’s light, fresh, and super filling. The sauce doused over the tilapia does double duty, acting as salad dressing for the bed of quinoa. (via Simply Scratch)

Cheesy Pasta With Tomatoes and Capers

Put that summer produce to good use and toss all the tomatoes into your pasta bowl. Cheese and capers hold the dish together for an unforgettable flavor combination. (via Lavender and Macarons)
Yasmein James
Yasmein James is a food writer living in New Jersey, but her heart’s on the other end of The Lincoln Tunnel. When she isn’t writing, you can find her eating her way to the most authentic ethnic restaurants in her travels. And writing all about it on her lifestyle blog, She’s Facing Freedom.
Recipes
The Conversation
Reviews:
More From Recipes