How to Party (and Dress) like Cara Delevingne This Holiday 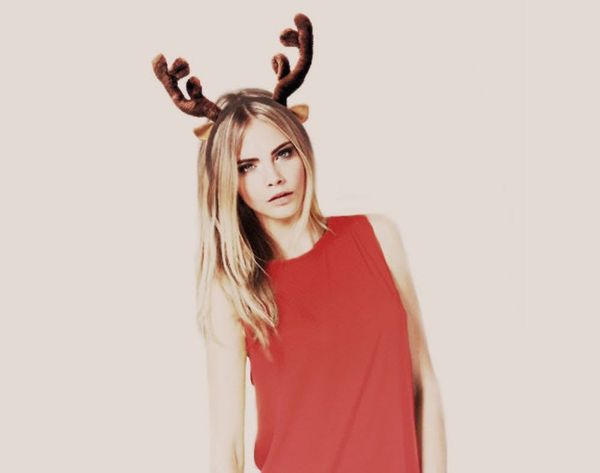 Invite Cara Delevingne to a premiere, ball, potluck or housewarming and it’s pretty much guaranteed that she’ll be life of the party (and that the antics will be well-documented on social media). Such was the case with Halloween, when she and Kendall Jenner gave Mario + Luigi their most fashionable rendition of all time and now, just days later, Cara’s reprising her role as guest-to-be-topped as the star of Topshop’s holiday campaign.

In a sneak peek video called Happy Holidays from Cara and Topshop, you can watch the bold-browed model throwing down in epic fashion all while clad in Topshop’s glitzy holiday garb. As expected, her version of rockin’ around the Christmas tree does not include sipping eggnog and building gingerbread houses. Instead, Cara hula hoops in a mini skirt, fist pumps in a gold cocktail dress and jams to the carol-free soundtrack in tuxedo-inspired separates. That’s all fun and games, but we all know the party doesn’t really start until someone tears down the string lights and starts wearing them as accessories… welp, leave it to Cara. ‘Cause really, did you expect her to end up on the “nice” list?

While we wait to see more from Topshop’s holiday line itself, we’re using the video clip as inspo for planning a non-traditional holiday party — and from the looks of it, this year is all about trading in Santa hats for jeweled bunny ears and hanging disco balls everywhere.

But Cara’s not the only celeb offering up holiday party inspiration:

If you *do* want to shake things up this year, here are more non-traditional ways to celebrate the season:

– A DIY paper wall tree means LOTS of color and no falling needles (perfect for your small space!)

Are you already cooking up your holiday plans? What’s going to make December 2014 extra special? Tell us in the comments below.