22 of the Best Celebrity Halloween Instagrams This Year 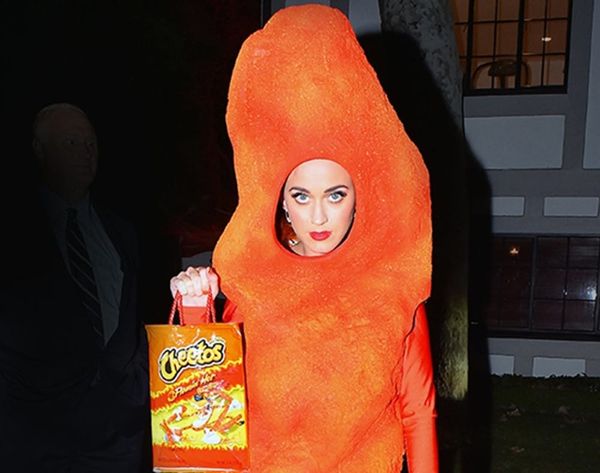 We’re used to celebs like Taylor and Beyoncé filling their Instagrams with enviable, unattainable #ootds. But today. Well, today is different. Today is Halloween and we get to carve pumpkins, snuggle up to watch scary flicks and get costume inspiration from the stars through our favorite social media. We’ve been tracking some of our favorite star Instagram feeds — here’s a little behind-the-Halloween-scenes look at what the stars are up to on the spookiest of days.

1. Taylor Swift: T.Swift probably DIYed this look herself considering her infinite skills. In fact, we wouldn’t be surprised if she could fly with those wings too. (via @taylorswift)

2. North West: We imagine this baby smells like really high end perfume and totally not like a skunk. Still, she makes a cute one. (@kimkardashian)

4. Kelly Oxford: This hilarious writer’s kids are going to school as what we can only imagine are creepy jesters…? Whatever they are, their expressions are spot on. (via @kellyoxford)

6. Katy Perry: Oh, boy. In true Katy fashion, she’s rocking Halloween as a snack. How much are you loving her bag accessorizing? Totally DIYable. (via @katyperry)

7. Jimmy Fallon’s Writer: We don’t know whether Jimmy himself is dressing up this year, but one of his writers who’s dressed as a Middle-Aged Mutant Ninja Turtle totally has the right idea. (via @jimmyfallon)

8. Katie Lowes: Turns out, she’s a gladiator by night and a tooth fairy by day. This was taken backstage at The Ellen Show, so we can’t wait to see what’s in store for the episode. (via @ktqlowes)

9. Lady Gaga: Okay, you caught us. This is just a normal day in the life of Ms. Gaga, but her daily life is like constant Halloween inspiration and maybe this Cleopatra look is a costume. (via @ladygaga)

10. Lena Dunham: She calls this look Margreen Tennenbaum. With a fur coat we’d love go with this costume ourselves. (via @lenadunham)

11. Sarah Hyland: A little closet purge led to the most adorable Annie and Miss Hannigan we’ve seen. (via @therealsarahhyland)

12. Sofia Vergara: This was a sneak peek from this week’s episode of Modern Family in which Fiona from Shrek makes a comeback. (via @jessetyler)

13. Heidi Klum: She’s celebrating Halloween and #FBF with a jack-o’-lantern grin from a past Halloween, but we’re hoping to see some costume gold that rivals Klum’s old woman transformation from last year. (via @heidiklum)

15. Rita Ora: We’re so glad someone took on a giant foam wig. It’s such an easy, last minute look that makes a huge impact! (via @ritaora)

16. Alexa Chung: Only this woman can make holding a pumpkin look totally glamorous. (via @chungalexa)

17. Cara Delevingne: Leave it to goofy Cara to totally pull off being the Lorax, mustache and all. (via @caradelevingne)

18. Jessica Alba: Alba and her friend went and Axl and Slash this year and totally nailed it. We didn’t even recognize her! (via @jessicaalba)

19. Nicole Richie: Cruella de Vil and her pups are looking absolutely adorable as “101 Maddens.” (via @nicolerichie)

20. Rachel Zoe: She’s channeling her dark side today as the Evil Queen with her partner, the Huntsman. Somehow she makes evil look totally posh. (via @rachelzoe)

21. Ed Sheeran: If anyone knows how to bring back an early ’00s idol in style, it’s Ed Sheeran. Groovy, baby. (via @teddysphotos)

22. Beyonce and Jay replicas: We’re going to play you out with none other than Queen Bey who posted this hilarious pic of someone who dressed their itty bittys as a mini version of the pop/hip hop power couple. Now let’s get a collective, “Awwwwwww.” (via @beyonce)

Which celeb do you love to see on Halloween? Let us know in the comments!

Katelan Cunningham
Katelan is a tech junkie obsessing over all things startup and design. She has entirely way too many apps on her phone and is no stranger to binge-watching. She accidentally fell in love in Los Angeles and that’s where she currently lives, writes, tweets and grams.
Halloween
Party
Halloween Instagram Roundup Kardashians
More From Party