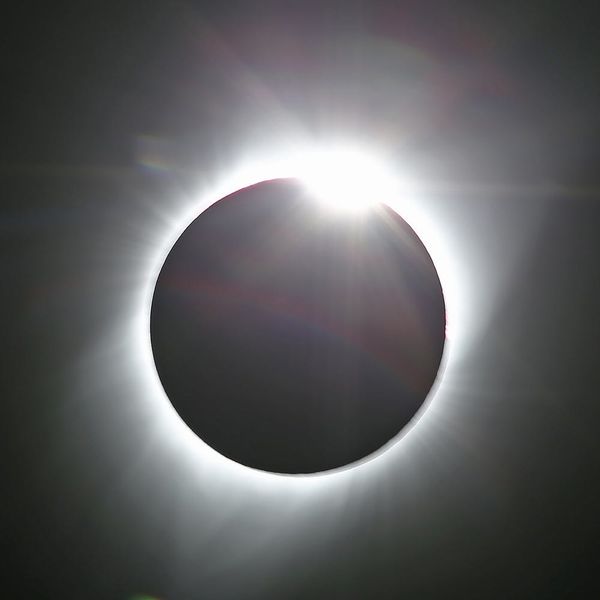 Did you get a chance to view the solar eclipse? Everyone on the continent had a different vantage point from which to sneak a peek of the rare total eclipse of the sun that happened today, and photos of the phenomenon are everywhere — including on celebs’ Twitter and Instagram accounts. Considering the last eclipse over North America happened 38 years ago, it’s no wonder people are so caught up in the excitement.

Celebrities are nerding out just like we are, and their reactions on social media prove that they love a good celestial event as much as the rest of us.

Some stars (and NASA) had jokes about the eclipse.

When the eclipse comes I’m going to borrow the special glasses my wife uses when I’m shirtless.

Q: What did the moon say to the therapist?

A: I'm just going through a phase. #SolarEclipse2017

Me trying to peek at the solar eclipse without "special" glasses🙈 pic.twitter.com/TQjBgNwmU0

But a lot of celebs were just excited to check out the eclipse with friends and family. Some even made their own viewers and pinhole cameras.

There goes the sun do do do do

"Once upon a time there was light in my life... but now there's only love in the dark" Backyard eclipse party 2017! What does the man on the moon do when his hair is too long? E-clips it! #Eclipse #Eclipse2017

We have no idea where we're looking with these glasses on! (Other than the sun) But here we go for the eclipse with our friends in Idaho! #eclipse #eclipse2017

#SolarEclipse2017 favorite person on earth not missing a second of life! Love you mom xoxo pic.twitter.com/LTSuM1v1Iq

Fuller House star Lori Loughlin threw back to the 1979 eclipse with her tweet.

"May the shadow of the moon fall on a world at peace" ~Frank Reynolds 1979. Powerful & relevant!! #SolarEclipse2017 pic.twitter.com/urjoEIN9DT

And Lady Gaga tried to hitch a ride behind the totality.

Did you get a chance to check out the eclipse? Tell us @BritandCo!