The Only 2019 Trends That Matter, According to Celebs 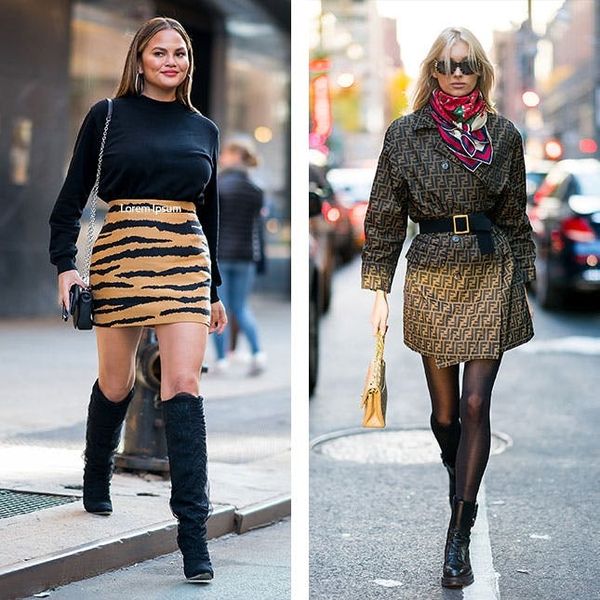 It should come at no surprise that our favorite A-listers are already stepping out in the biggest trends of 2019. Celebs including Chrissy Teigen, Kerry Washington, and Elsa Hosk have been paying close attention to the spring runways with their recent fashion-forward ensembles. Curious about what looks made the cut? Keep scrolling to check out the only celeb-approved 2019 trends that matter, and shop each to get a jump start on what everyone will be wearing in two months.
So Fierce: We’ve been having so much fun with all of the animal-print pieces out there this fall and winter. Well, the good news is we can continue wearing all of those finds, including pieces like Chrissy Teigen's zebra-print skirt she wore in New York City. (Photo via Gotham/Getty)
Anine Bing Dolly Silk Zebra Midi Skirt ($299): Pair this skirt with a chunky knit and booties to wear all season long.
Box It Up: If it’s a new it bag you’re on the hunt for, try a boxy top-handle version like Blake Lively wore here in New York City. (Photo via Robert Kamau/Getty)
IMAGO-A Carre Top Handle Bag ($475): Say hello to the bag you'll carry all of 2019.
Biker Gang: The polarizing biker short look infiltrated every corner of the street style world in 2018, but the separate isn’t slowing down anytime soon. It may be time to jump on the trend like Gigi Hadid here. (Photo via Tal Rubin/Getty)
We The Free So Chic Biker Shorts ($78): Yes, biker shorts can be a bit intimidating, but if you think about pairing them with sophisticated pieces like a blazer, they're much easier to digest.
California Dreamin’: For spring, it’s all about cool California-inspired separates like tie-dye pieces and graphic tees, similar to what Kendall Jenner wore out and about in New York City. (Photo via Raymond Hall/Getty)
Urban Outfitters All Seeing Eye Tee ($39): Wear this graphic tee with jeans and sneakers for that Cali-cool vibe.
Fine Print: Next year, bring on bold, artful prints on everything from tops to jackets to accessories like Elsa Hosk’s pretty scarf she wore with a patterned coat in New York City. (Photo via Gotham/Getty Images)
Kachel Kristina Printed Scarf ($38): Punctuate any of your winter outfits with this pretty printed silk scarf.
Tailor Made: Polished pieces will continue to hold strong next year. If you want to jump on the look right now, follow Kerry Washington’s lead and opt for a structured topcoat this winter. (Photo via James Devaney/Getty)
Na-kd Tie Sleeve Tailored Coat ($155): You'll make an instant statement all season long with this punchy pink coat.
The Long and Long of It: Designers like Giorgio Armani and Alexander McQueen offered a slew of extra-long blazers in their spring collections. Clearly Joan Smalls caught on, already stepping out in Paris in a sleek style. (Photo via Marc Piasecki/Getty)
Mango Oversized Corduroy Blazer ($130): Corduroy is another huge trend right now (and will be in 2019!), so consider testing out the look with your oversized blazer this winter.

Bobby Schuessler
Bobby Schuessler is a contributing fashion writer at Brit + Co and has contributed to Who What Wear, Refinery29, Lucky, Glamour, Out, Nordstrom, and Barneys New York. When he's not writing about style and shopping, you can find him catching up on the latest Housewives franchise and sipping his go-to drink, a vodka martini with a splash of cranberry and a twist.
Celebrity Style
Celeb Style
Celebrity Style style trends Winter Fashion Winter Style