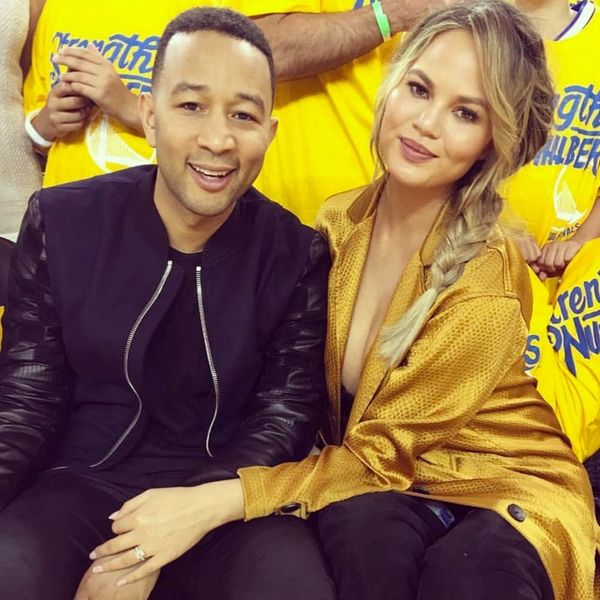 Since Chrissy Teigen’s baby girl Luna was born back in April, she’s definitely put up with her fair share of Internet trolls. They’ve had something to say about almost every move she’s made since she became a mom, but when she and John Legend enjoyed their first post-baby date night, Twitter really went off on them. Thankfully John publicly defended his lady. And now the two are apparently scheming together to troll the online bullies harder than they’ve ever been trolled before.

While at the NBA playoff game last night in Oakland, CA, John and Chrissy decided to play a prank. The two of them had courtside seats for the game and, naturally, baby Luna was included in their entourage for the evening. Luna was chilling in a VIP suite while they watched the game. But when Chrissy went up to pay her a visit at halftime, the two decided to pull a fast one on the public.

They swaddled a stuffed animal into a baby blanket to make everyone think it was Luna. In Chrissy’s Snapchat story she says, “For the second half, I’m going to pretend we brought baby Luna courtside. Twitter is going to get so mad.” LOL too good!

However, the couple sadly wasn’t able to pull the prank off in its entirety. In a subsequent snap, Chrissy posted a sad selfie with the caption, “We couldn’t bring fake baby.” Damn. Well, it’s the thought that counts. We have faith that you two will find another way to epically troll the trolls.