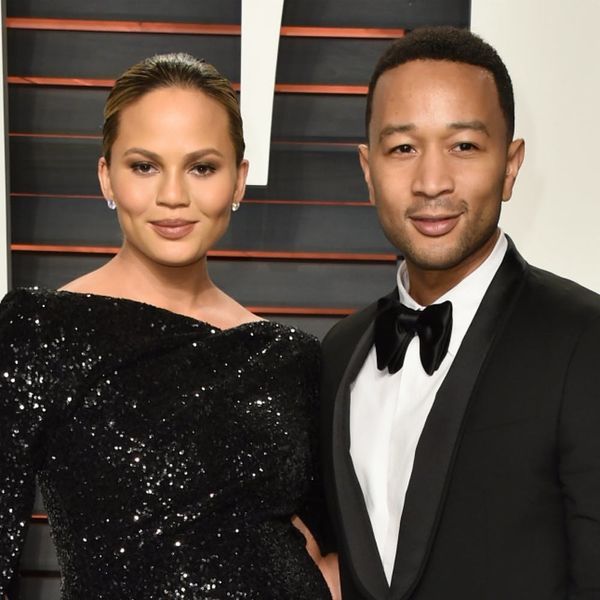 As if moms didn’t have it hard enough. Between being given unrealistic post-baby body advice, or feeling like our working mom sitch isn’t working out, it seems like new mamas can never catch a break. Even Chrissy Teigen can’t escape being questioned for her every single move — including going on a date night shortly after childbirth. Since giving birth last month to gorgeous baby Luna, the model and actress has been on the receiving end of a lot of harsh criticism about every single little thing she does. And now, baby daddy John Legend is clapping back at all those who dare attack his wife for doing nothing wrong at all.

The couple recently went out for dinner by themselves (GASP!) and Twitter had a field day — accusing Teigen of negligence and not loving her baby enough. Hubby John Legend had enough and took to Twitter himself to let people know that it simply isn’t cool to talk about moms in the way that’s been happening more and more over social media.

Funny there's no dad-shaming. When both of us go out to dinner, shame both of us so Chrissy doesn't have to take it all. We'll split it.

Not only is John staying cool in the face of so much garbage being thrown towards his wife, he’s making a point to let people know that their overall bullying shouldn’t be tolerated. YAAAAS, John! After all, it takes two people to make a baby, and two people to have a couple’s date night, so why does Chrissy have to bear the brunt of the attacks? Plus, coming to his wife’s defense is definitely getting him some brownie points at home. *Swoon*

With the sleepless nights, stress and worry that comes with being a new parent, everyone should be so lucky as to get a few hours with their spouse alone. Everyone deserves a break from time to time. You hear that, John? It’s moms and spouses everywhere thanking you for speaking out against this ridic double standard.

Did you get time away from your new baby? Tell us @BritandCo!