And the Winner of Our Halloween Costume Contest Is… 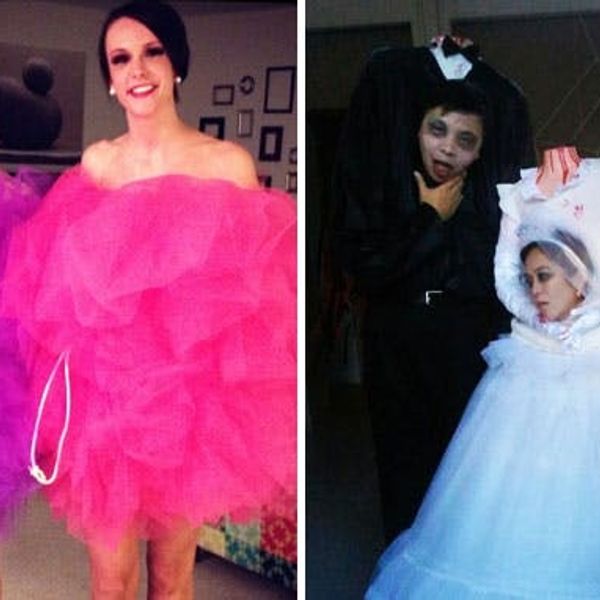 Wow. Just wow. We are insanely impressed with your creativity, ingenuity, and downright creepiness this Halloween! With over 60 submissions, selecting the winner for this contest was definitely a doozy. From iPod commercials to zombies to good old Cruella DeVille, we’ve got quite a collection of costumes to share.

Jason Chuck (“the happy couple”) for their incredible costumes. Both of these costumes are all about DIY and run the gamut from incredibly cute to totally scary. Well done! We know you will both have a lot of fun with November’s Brit Kit.

Now for the rest of the costumes! Here we go.

Apple Fangirls: iPods and iPod commercials. Love it. (Plus the iPod dresses were made using neon duct tape!)

Villains: No time like Halloween to let your inner villain out!

Rockstars: Kurt and Courtney, John and Yoko, Katy and Russell. You know ’em, you love ’em, and you know how to rock ’em. (Full disclosure: I’m the Yoko in John and Yoko, so that one didn’t officially make the contest cut!)

Little Darlings: Love that some of you sent in photos of your little ones all dressed up. How cute is that scarecrow?!

Moonrise Kingdom: Both of these takes on Sam and Suzy are pretty spot on.

Hipster Disney Princesses: The best one here is definitely Snow White and her sign that reads, “I had an apple before it was cool.”

Nerd Alert!: Nothing like a little Internet pop culture for costume inspiration. Extra points go to the gal in the top right who got 25 companies to sponsor her “sponsored” costume.

Food Costumes: The sandwich is epic!

Top Notch Execution: Each of these costumes was so perfectly executed that we’re furiously taking DIY notes. Just look at all the LED lights in that nebula!

As Seen on TV: The New Girl and Honey Boo-Boo.

Couples Costumes: Quite a range of couples for this collection. We’ve got silent film stars, zombie Grey’s Anatomy characters, Sponge Bob, and an odd coupling of a clown and a gypsy witch.

Party Rock: So, these costumes didn’t quite fit into a category or theme but they’re all awesome. Also, did that Mickey Star Wars have some inside info?!

Pairs: Not quite sure what all of these ones are, but everyone is rocking a pretty solid attitude ;)

Absolutely love this submission! Adding the animated characters is a genius move. And, fair warning, now is when we’ll shift to the

The Walking Dead: Marie Antoinette, a butler-esque skeleton, the Bride of Chucky, and a vampire? Ok the next set is REALLY scary.

SO SCARY: We have the chills. Eeeek! But really well done.

Anjelika Temple
As Co-Founder and Chief Creative Officer of Brit + Co, Anjelika Temple brings her voracious consumption of all things creative and colorful to DIY projects, geeky gadgetry finds and more. When she's not DIY-ing her heart out, you'll find her throwing dinner parties with friends or adventuring with her husband David, their daughters Anokhi and Indira, and their silly dog Turkey.
Contest
Budget Friendly Home
Contest Halloween