21 Delicious Ways to Get in on the Cronut Craze 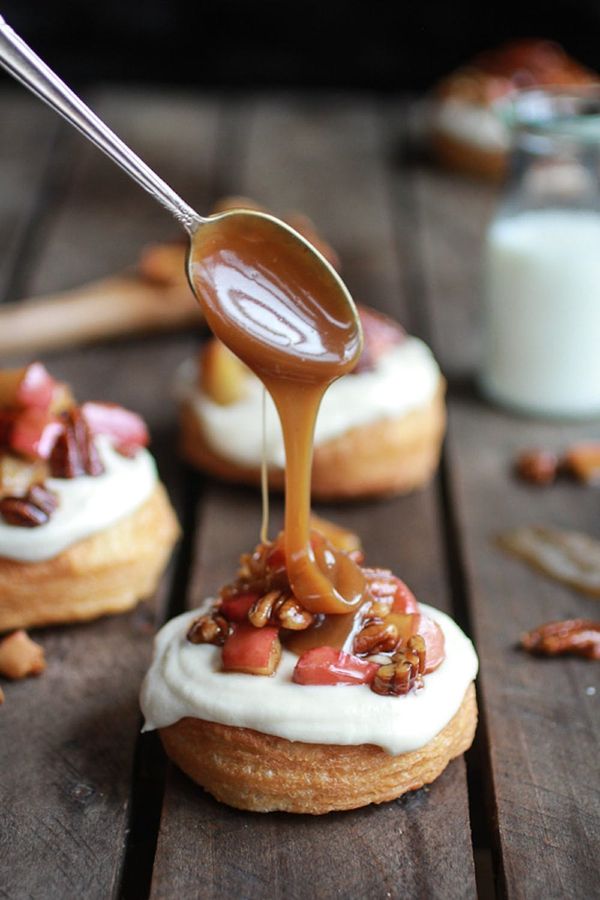 Time Magazine calls the Cronut one of the 25 best inventions of 2013. And according to the good people of NYC, they might be right. One woman paid $14,000 for a dozen. (Say what?!) Dominique Ansel is the mastermind behind these flaky little croissant/donut hybrids, and pastry lovers line the streets outside his bakery every morning at 5am to snatch up the trendy treats. You might as well face the music: You want one, but the competition might be too fierce to get one. Our solution? Bring a version to your kitchen with these 21 crazy-awesome recipes.

1. Homemade Done Right: The extra time it takes to make the iconic creation is so worth it. Invite some friends over to share the cronutty goodness (and avoid eating them all yourself). These babies are best eaten fresh. (via Broad Appetite)

2. Apple Pecan Pie with Apple Cider Caramel Drizzle: Topped off with apple bits, chopped pecans, cream cheese, and an apple-cider caramel sauce, this is To. Die. For. (via Key Ingredient)

3. Salted Caramel Crescent Dough: This five-star-rated recipe stands out from the crowd for its secret time-saving ingredient: crescent rolls. (via Pillsbury)

5. Cinnamon Sugar Cronut: We wish the quality of this photo was a little higher, but we can’t ignore cinnamon sugar. We dig it. It’s amazing on a simple piece of plain toast, so we’re pretty sure these will rock your world. (via Ladies Home Journal)

6. The Croissant Donut: Foodies, there’s no need to travel to New York to get your fix. Make your own and enjoy bragging rights too. (via Not Quite Nigella)

7. Vanilla Chai Cream: The vanilla chai cream version will send the whole world into a food frenzy. We dare you to create them… and eat just one. (via Monday Morning Donuts)

8. Pumpkin Spice Caramel: By now we’re sure everyone’s got mad cravings. Just what would you do to get your paws on one of these babies? There’s always the Black Market. (Yes, these are going for $40-a-nut on Craigslist!) But since we can’t condone illegal activities, we’ll just suggest that you make them. No regrets. (via Foodness Gracious)

9. Maple Bacon Cronuts: This baby packs a protein punch: bacon. How could it not be incredible? (via Life Made Sweet)

10. Chocolate Ganache Glaze: This recipe proves the process doesn’t have to be complicated. Pre-made, frozen croissants and a chocolate-ganache glaze are the two thing it takes to make the magic. (via Kirbie’s Cravings)

11. Sugar Coated at Home: Is it all hype… or is it worth the trouble? Test your theory with this basic DIY. (via Food 52)

12. Vanilla Cream and Orange Blossom Glaze: It may have taken Dominique Ansel ten or more tries to perfect his Cronut, but you can stick to a tried-‘n’-true version. This recipe claims to have “cracked the Cronut.” A sweet orange glaze makes it over-the-top awesome. (via Foodista)

13. Vegan Cronuts: Vegans, try to contain your excitement. This recipe might make vegans out of us all. (via House Vegan)

14. Easy Mini Nutella ‘Nuts: If you’re as obsessed with Nutella as we are, you’re now drooling all over this screen. Nutella meets a perfectly sugar-powdered ‘nut for one epic mashup. (via Mommyhood’s Diary)

15. Buttermilk-Vanilla Glazed: We’re fascinated with all the layers in this flaky fave (not to mention those vanilla bean flecks!). How many layers does it take to make the perfect treat? The world may never know. (via Salt and Smoke)

17. Homemade Chocolate Biscoff: Whoa, did we just use chocolate and Cronut in the same sentence!? Swooning. (via Pixie Dust Kitchen)

19. Lemon Vanilla Fauxnuts: Ready to see what this is all about? These made-from-scratch lemon vanilla pastries take a serious amount of love (and butter!), but trust us. The vanilla creme is where it’s at! (via The Boy Who Bakes)

20. The Nutella Fauxnut: The original Cronut takes a whopping three days to make. Fortunately, we’ve located a shortcut. With Nutella! (via Love Swah)

21. The Texas: Meet your flakey fix, Texas-style. Everything in Texas is oversized and this big-as-a-dinner-plate pastry is no exception. Go ahead and hunt down a two-gallon bucket… that’s gonna serve as your shape-cutter. Seriously. (via Monday Morning Donut)

Have you tried the Cronut yet? (Can you mail us one… or half a dozen!?) Let us know in the comments below!

Bethany Kosten
Bethany Kosten is a freelance editor at Brit + Co. and an information junkie who is passionate about creating and consuming clever content. Being an idea enthusiast makes her unique, but also — and this is critical — awesome. Side note: Bethany is a serial chips and salsa eater. (Seriously, hide them.)
Recipes
The Conversation
More From Recipes