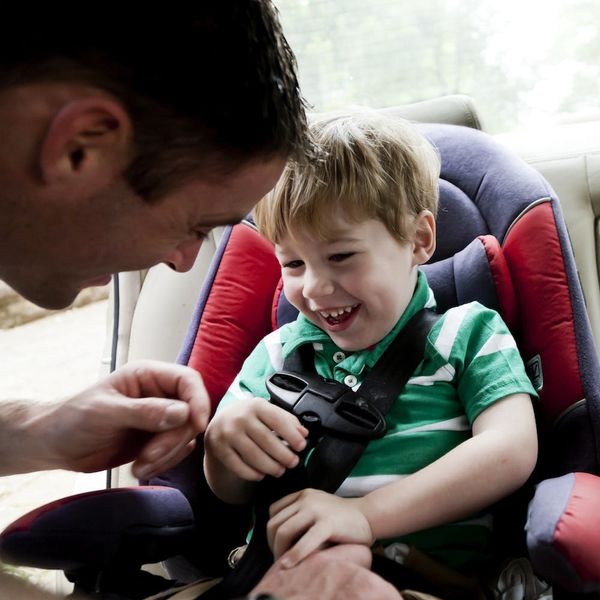 If you’re a “sympathetic vomiter” then you need to prepare yourself, because yowza! Frankly, even if you’re not prone to puking on cue when someone else is sick, you may need to prep yourself for a major gross-out and a massive laugh. One dad’s texts to his wife have gone viral, with some feeling his pain and others laughing their butts off at the story that many can sympathize with in one way or another — that is, until the cops showed up!

It all started while Ben Patterson was driving with his son, Declan, when the toddler threw up. Apparently not one to handle such situations well (in that the dude tends to puke himself when seeing others vomit), Ben quickly pulled over, jumped out of the car and tried to get a handle on the icky sitch. He also felt the need to snap a pic and share with his wife, as one does.

“So this just happened,” Ben texted his wife Stephanie. “I just pulled over and am trying not to throw up myself… Call me… I just threw up trying to clean him up… It smells SO BAD.” Eeeew! Also lol!

When things got stinky, Ben got sick. All over a lady’s lawn. Yuck! To make things worse, the older woman accused the vomiting fellow of drinking and driving. Doing her duty, she called the cops, who of course showed up and demanded a breathalyzer. Thankfully passing that, Ben was left to continue home, yet was also still left with a puke-covered kid.

“WHAT DID HE EAT BECAUSE IT SMELLS LIKE ROTTING WHALE BLUBBER,” Ben wails via text to his wife. We certainly hope little Declan is feeling much better (and his daddy too), but when it comes to kiddies — well, these things happen. But man oh man, thank you for the laughs.

Do you have a story that’s a little bit nasty and a whole lotta hilarious? We’d love to hear it @BritandCo!

Desiree O
Desirée O is a ‘Professional Bohemian’ who loves anything and everything related to the arts, entertainment, and pop culture. She ADORES being a ‘Newsy’ for Brit + Co, covering all of the latest tidbits of awesomeness that you want to read about. When she’s not writing, she’s either making messy art, going on long adventurous walks with her camera, or poking around over at bohemianizm (http://www.bohemianizm.com/). You can find out about Desirée O and her work at http://DesireeO.com/ or follow her on Twitter @DesireeO.
Parenting
Entertainment
Parenting
More From Entertainment