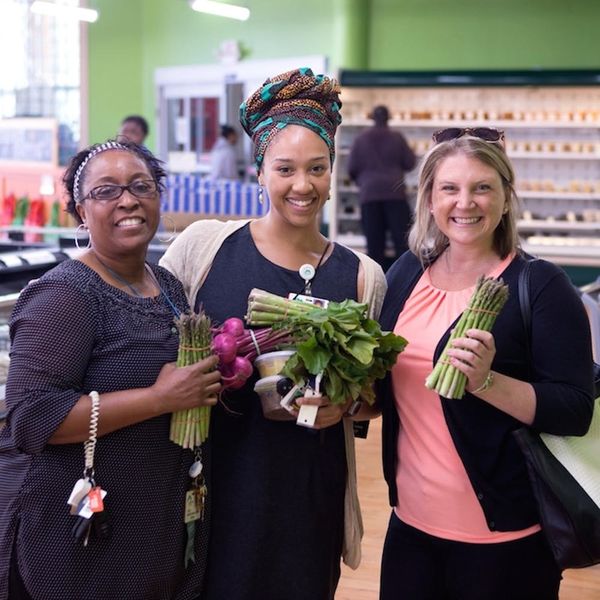 Food trends aside, it’s an interesting time for nutrition in the US. While one in six Americans is considered food insecure, 40 percent of food grown stateside goes to waste because grocery stores won’t buy imperfect produce and often throw out packaged goods approaching “best by” dates. Knowing this, the former president of Trader Joe’s decided to do something about it, and that’s why he opened Daily Table in a low-income neighborhood of Boston this summer. It’s a grocery store that subverts the standard way of doing things, and instead offers perfectly edible food that’s donated or sold to the store at deep discounts and then sold to customers at dirt-cheap prices so nearly everyone can afford it.

“The challenge we have in America is that the food system is designed from the farm on up to create calories that are cheap and nutrients that are expensive,” he told Co.Exist recently. “People on the lowest economic rung get squeezed the hardest.” Because of that paradox, it’s now the first time in US history that it’s common for those struggling to afford meals to face obesity and other health issues nonetheless.

“The answer here isn’t a full stomach,” said Rauch. “The answer has to be a healthy meal. It turns out getting a healthy meal is a lot trickier because of the costs associated with fruits and vegetables, dairy, protein. These are expensive ingredients.”

So, to make those ingredients more accessible, he turned to creative partnerships with vendors who are already in the habit of donating to food banks — another worthy cause that he says he’s not in competition with, but rather, stands alongside in an effort to give people more options.

“Most of the 49 million Americans that are food insecure are working, they have jobs,” he says. “They’re the working poor. They’re buying food now. They’ve told us in no uncertain terms, ‘we don’t want a handout. We don’t want charity.’ They want to buy products. It helps provide dignity. They don’t want to be stigmatized.”

Understanding that people who hold down multiple jobs while raising families don’t necessarily have a lot of time for meal prep, Rauch designed the store’s offerings to meet their needs. As a result, about half of its offerings are prepared meals for under $2, all made by chefs in-house. It’s an interesting challenge to rise to, since each day’s ingredients are subject to whatever’s been donated or bought at cost.

“Our chef has to basically be like on the Food Network, one of these Top Chef sort of contests — okay, here it comes, make us something good out of that,” he says. The other half of the store’s food is typical grocery store fare, sold as-is for customers to take home and cook themselves.

Open since June, Daily Table serves hundreds of customers each day and plans to open additional locations in the future.

What do you think about this solution to food insecurity + waste? Tweet us at @BritandCo to start a conversation!

Amy Lynch
Amy is a freelance writer and editor, telling the stories of progressive people and projects that move the world forward. Her work has appeared on The Hairpin, Refinery29, Citygram and more, and she's developed content for the likes of Alternative Apparel, Milkshake and Silvercar. She lives, works and plays with her fiancé and their dog, Bogey, in the weird, wild heart of Austin, Texas.
Healthy Eating
The Conversation