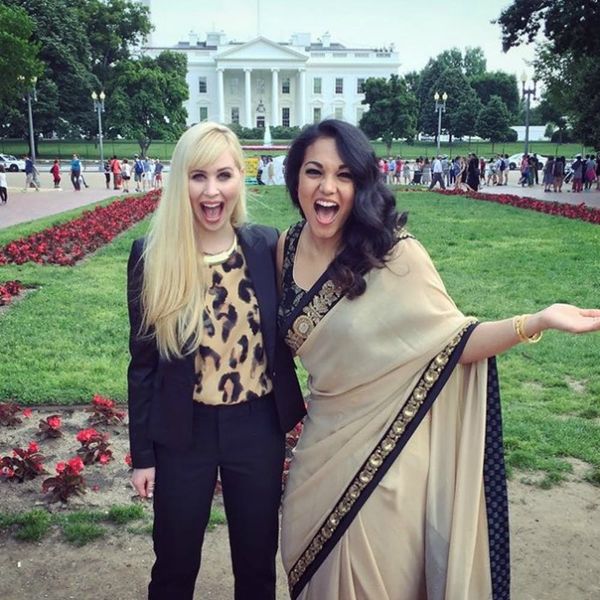 Business is no longer a boys’ club — not that you’d know that from the mainstream media. With women starting 1,600 new businesses every day, you’d think we would see more stories of powerful #girlbosses in business besides the occasional Sophia Amoruso or Amal Clooney celebrity or fashion piece, but that’s just not the case.

We sat down with Komal to talk more about the project, what it means to be a #girlboss and how the heck the film ended up premiering at the White House.

B+C: What drew you to this project in particular?

KM: I was drawn to the project when I saw the Kickstarter campaign started by my business partner and the director of Dream, Girl, Erin Bagwell. I felt like the women I was seeing on-screen were just like me. They were women I identified with, who had started their own companies and were facing their own challenges. I just knew we needed to share their stories.

B+C: Dream, Girl raised over $100,000 on Kickstarter in August 2014. How did it feel to have so many global supporters so early on in the process?

KM: You know, it was absolutely phenomenal. I came on board once the Kickstarter campaign was fully funded… so Erin had already gone through 30 days of such intense campaigning and promotion — seeking support from this online community of female founders and supporters. Erin says having 3,000 people back this mission and this dream overwhelmed her in the best possible way.

B+C: How have the women in the film inspired you?

KM: It’s really funny, because as we’ve been making this film, we’ve gone through our own series of challenges that we’ve had to overcome time and again. Every time I see another cut or every time Erin is editing, we come by clips that just speak so deeply to where we are in that moment.

B+C: You employed an all-female production crew on this project. Why was that so important to you?

KM: Erin made that decision consciously. She knew that the mission of this film was to inspire and empower women and young girls to see more role models, so that they knew what they were capable of — truly capable of — across many industries. So Erin very deliberately made the decision to hire an all-female crew and to really create a community and energy on set that was conducive to very vulnerable, authentic conversations. It really took having an all-female crew to do that.

B+C: How was premiering at the White House? That had to be amazing.

KM: It was one of the greatest days of our lives. When we were driving up to the White House in a taxi cab, Erin and I just sort of looked at each other and said “We got here. We did this.”

We’ve had quite a tumultuous couple of months. Back in October, we decided to restart the film. The cut that we had just wasn’t serving the story as well as we thought it should, so we went back to the drawing board and started again. A few months ago I was also diagnosed with cancer, which was quite harrowing and very intense. Over the past three months, I’ve gone through scans and surgeries to come out cancer-free, which has been phenomenal. But through all of this, we continued working toward this moment, toward this premiere.

So, as we were driving up in that taxi cab, we told each other how proud we were of one another and reminded each other how hard we worked to deserve everything that was coming. To walk in the doors of the White House and to see 200 of our family, friends and great supporters, along with congressmen and senators, watching what we had been working on for two years to give to the world was the greatest thing. It was one of the best nights of our lives.

B+C: If you were a little girl watching this film for the first time, what would you want to take away from it?

B+C: This film is all about empowering female entrepreneurs. What would you say to any young women out there who are thinking of becoming entrepreneurs?

KM: I would say ask yourself why. My boyfriend always tells me to come back to my why when I’m going through a hard time or when I’m thinking about next steps. Why is this calling you? Why is this what you want to do? I’d say to young women who want to start their own companies: Keep asking yourself why every step of the way, and make sure that it feels 100 percent right in your heart and your mind. Also, build a community of people around you to support you throughout the highest highs and the lowest lows.

Do you think there should be more stories of successful female business leaders? Let us know your thoughts on Twitter by mentioning @BritandCo.

Ashley Macey
Ashley Macey is a lifestyle freelance writer who loves all things fitness, wellness, and creativity. When she's not exploring her home in the Pacific Northwest with her dog Max, you'll probably find her curled up with a good book and some hot tea. Follow her daily jaunts on Twitter.
Entrepreneur
Work
Entrepreneur Feminism Girlboss