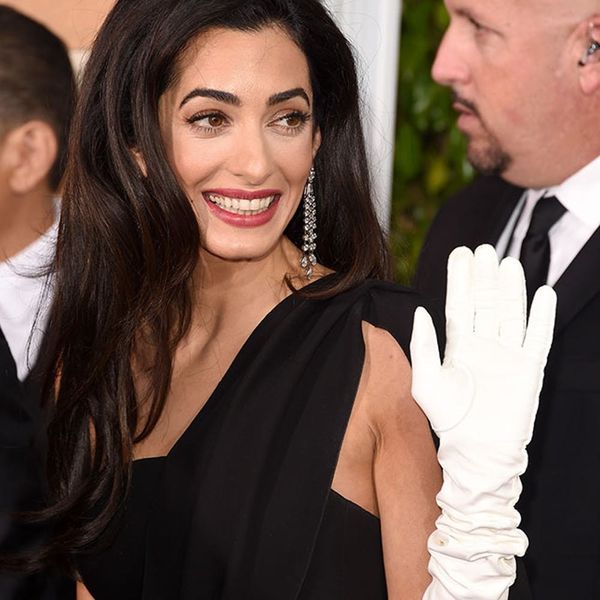 Like the rest of the world, we too are completely fascinated by Amal Clooney. The always-poised London-based barrister is a superhero of a woman with an elite career as a human rights lawyer, a passion for activism and an always on-point sense of style. Oh, and a trophy husband at home at the end of the day (we’re just playing, George). In other words, she’s the ultimate #Girlboss. So, in honor of her 37th birthday, we’re celebrating Amal by gushing over some of her major accomplishments. Scroll through to learn all about your new famous role model.

1. She’s Got an Insanely Impressive Resume: Just incase you missed Tina Fey and Amy Poehler ripping on George Clooney by listing Amal’s accolades during the Golden Globes, here’s a very brief summary of her jaw-dropping career: Since receiving her Masters of Law degree from NYU, where she worked as a student law clerk under now-Supreme Court Justice Sonia Sotomayor, Amal has played a role in some of the biggest legal cases of our time. Her client list includes Enron and WikiLeaks founder Julian Assange, and she has been a part of several expert commissions tasked with looking into major international human rights issues, including possible violations of the rules of war — and all before she’s turned 40. Oh, she’s fluent in Arabic, English and French too. (via The Daily Beast; Photo via Pool/Getty Images)

2. She’s Got an Even More Impressive Work Ethic: Amal had no problem trading in her couture wedding gown for her barrister robes shortly after she officially became Mrs. George Clooney last September. Fresh off her Venetian nuptials, Amal flew to Greece to meet with political officials and discuss the country’s effort to reclaim a collection of ancient Greek sculptures that have long been displayed at the British Museum in London. (via People; Photo via Pool/Getty Images)

3. She’s Also a Maker: Apparently Amal *has* had time in between her jam-packed schedule to master Sewing 101. George revealed that she DIYed her now-famous opera gloves that she wore to the 2015 Golden Globes along with her caped Dior Haute Couture gown. We assume it’s just one of many style hacks she has up her sleeves (and we’re keeping our eyes open for them all). (via Brit + Co; Photo via Jason Merritt/Getty Images)

4. She Helped Spark the #AskHerMore Movement: Amal’s first major on-camera red carpet appearance was full of awkward gags. Ryan Seacrest presented her and George with “Game Over” t-shirts and Guiliana Rancic flagging down the couple to take a shot of tequila (which they politely declined) instead of the E! co-hosts actually getting to know the notoriously private Amal or spotlighting her accomplishments. This and other majorly misguided red carpet interviews, mostly which focus on women’s appearances versus their work, inspired her to launch the #AskHerMore campaign to highlight more than what leading ladies are wearing. Let’s hope the hashtag sinks in before Oscar time. (via Mic; Photo via Andrew Goodman/Getty Images)

5. She Knows How to Dress like a Boss, Even When She’s Flying: We have major respect for a woman who can kick ass and look good while doing it, and Amal does just that with an enviable amount of grace. Even when she’s at the airport — with large carry-ons in tow — she has the style savvy to appear impeccably polished. (via Refinery29; Photo via Eamonn M. McCormack/Getty Images)

What #Girlbosses do you look up to, famous or otherwise? Tell us in the comments below.