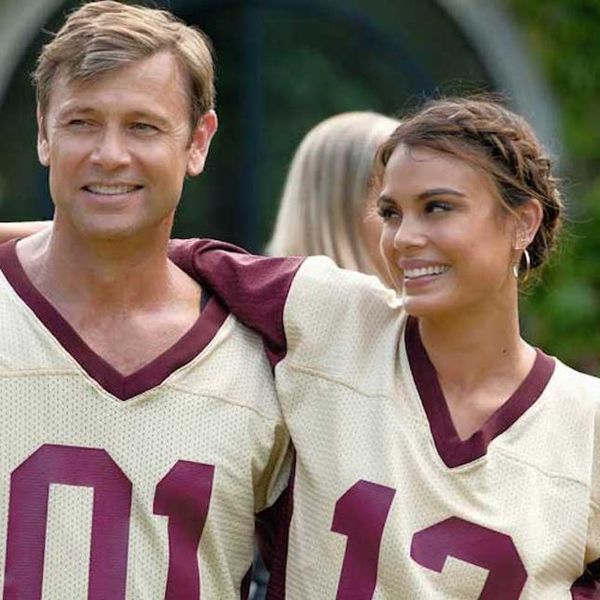 After an uneven start, Dynasty has really been stepping up its game lately. The Thanksgiving episode is the kind of over-the-top fare I expect — nay, demand — from my primetime soaps. The show could still push the envelope a little more, but I need to remind myself that it’s only episode seven. And I like where it’s headed.

To kick off the Turkey Day festivities, Blake (Grant Show) hosts his annual family vs. staff flag football game, which is so exactly the type of thing a billionaire would make his employees do, thinking they all love it. What is also something a clueless billionaire would do is bring in former NFL players to pad out the family team. It’s eye-rollingly perfect, especially since even against some real football players, the staff team almost always wins.

It’s a lot of fun — and then the show expertly pivots from opulent holiday activities to a hostage situation, like only a good soap can.

It seems Claudia (Brianna Brown) has not been secretly medicated by someone out to get her. No, she’s been medicating herself with benzos, and when Cristal (Nathalie Kelley) and Sam (Rafael de la Fuente) find out and plan to confront her, Claudia snaps and starts locking people in the wine cellar. Her first hostages: Sam and Anders (Alan Dale).

Seriously, it’s pretty great. I was really hoping she’d keep it up, stalking various Carrington family members and finding ways to put them in the cellar together. Alas, it only sort of works out that way. Fallon (Elizabeth Gillies) arrives in time to distract the gun-brandishing Claudia and kind of save the day, but the confrontation plays out over the Thanksgiving feast.

Apparently, Claudia did once suffer a tremendous brain injury, but when she recovered, she continued to fake it to keep Matthew close (because Claudia knew he was cheating on her). When he told her he was going to leave her for Cristal, she killed him. Claudia was an engineer before her injury and knew just how to set Matthew up. She didn’t mean to actually kill him, just hurt him. But I guess she’s not as good of an engineer as she thought.

Claudia is still pregnant and the Carrington family decides to keep quiet about Matthew, so she is carted off to a mental hospital instead of prison. And that seems to be that. The only loose end is that Steven (James Mackay) knows that his father’s “pocket cop” Stansfield (Michael Beach) is the one who killed Willie (Dave Maldonado) and made it look like a suicide, so Steven is out to take down that relationship because Steven always fights on the side of what is good and true.

This dovetails nicely with what Jeff Colby (Sam Adegoke) is up to for Thanksgiving. Instead of flying to the Bahamas, like he tells Fallon he’s doing, he goes to see his father, Cecil, in prison. Steven calls him to ask for help taking down Stansfield, and the juxtaposition of those scenes makes me wonder if Cecil Colby isn’t in jail because he was set up by Stansfield, and possibly Blake. Now that would be an interesting twist.

The only other big story line here is that when Fallon gets kicked out of her house for being a brat, she goes to where Michael always spends Thanksgiving — serving food at a church dinner. There, Fallon meets his parents, who have always been under the impression that he’s an executive at Carrington Atlantic. That’s… kind of a big lie, but Fallon covers for him and the two of them make up. I’ll confess, I’m rooting for those two crazy kids.

The episode ends with Blake telling Cristal he thinks they should have a baby, which — no. Just no. That would completely ruin the show, so no. I’m just going to believe it’s never going to happen.

But while they start the baby-making, a mysterious man comes to the food truck Cristal uses to send money back to Venezuela and he demands to see her. “We’re here and we want what’s ours,” he says. Presumably, this is someone she stole money from when she fled the country? It’s hard to say, but there is definitely a bad dude in town looking for “Celia Machado.”

Blake: “I’ve been in this game a lot longer than you, son, and you’re just gonna have to accept that the rules are different at this level.”

“Participation Trophy Wife” is an excellent burn on Fallon’s part.

What did you think of the Dynasty Thanksgiving episode? Tell us @BritandCo!