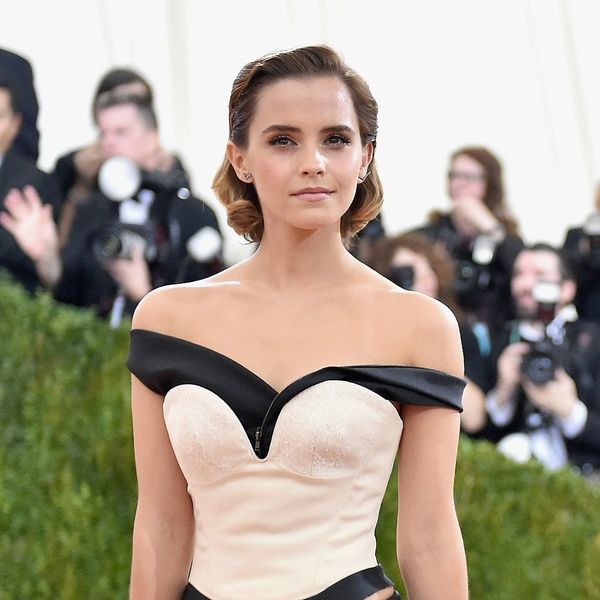 Emma Watson has taken a break from teasing us with glimpses of the new live-action Beauty and the Beast remake to unveil the latest pick from her self-professed feminist book club, Our Shared Shelf, and trust us when we say, it’s a good ‘un!

Following in the footsteps of June’s perfect summer read, Persepolis, Emma’s latest pick is yet another amazing title focused on gender and equality: except this one has a big rock ‘n’ roll twist! In fact, her selection is so fascinating and so fun, she’s actually dedicating TWO months to it.

Her read gives us an intimate look into the life of Carrie Rachel Brownstein, who you may recognize as the mastermind behind Emmy-winning comedy series Portlandia. But before embarking on her successful career in comedy, Carrie actually started out as a young girl growing up in the Pacific Northwest who fell into the ‘90s grunge scene as a musician in the all-female punk trio Sleater-Kinney.

Taking a first-person look at the indie music culture of the ‘90s and how it inspired her comedy, Brownstein lets us into her rocky childhood and eventual escape “into a world where music was the means toward self-invention, community, and rescue.”

So far, so good: Emma’s choice is already garnering some pretty stellar reviews on Our Shared Shelf’s goodreads page.

“Normally a person hears the music long before they ever learn what it’s about… to be able to listen to these songs after learning these things about them is going to be pretty awesome,” wrote a reader named Robert.

“Her book is opening up a whole new genre of music for me that I didn’t even knew existed. Loving the book!” echoed user Ashley.

Another, Siobhan, wasn’t quite so sure, however, saying “The writing is undoubtedly beautiful. However, my experience was that the book takes some getting used to… I’d be interested to see if other people found that they grew into the book.”

There’s only one way to find out: Hunger Makes Me a Modern Girl, here we come!

Will you be reading Hunger Makes Me a Modern Girl? Tweet us @BritandCo.