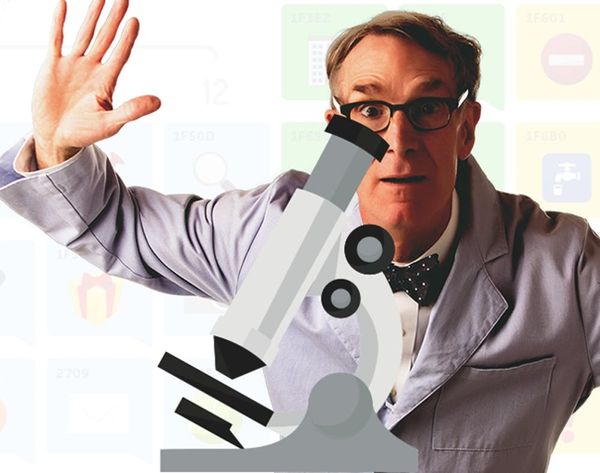 We could not be more excited that Bill Nye continues to entertain and educate us in the ways of DIY science way past the ‘90s. After he broke down the theory of evolution through emoji, it became clear that his love for emoji was strong. In a partnership with General Electric, the beloved Bill Nye the Science Guy has blessed us with the Emoji Table of Experiments. We’re just going to go ahead and say it: If this was the table we had to study in chemistry class, we would have totally aced it.

With each emoji on the table, Bill Nye and his team make a science experiment to match and share the steps for you to DIY yourself right at home. For example, if you click the the lightning emoji, it leads you to an experiment for you to make an electric pickle… which we can all admit is super handy. He even recruited some familiar faces like Rosario Dawson and Jessica Williams to help him in the lab.

Bill Nye told Refinery29, “What we want is for people to embrace the natural world and to understand the laws of nature and the process through which we do that is science.” We’re right there with you, Bill! Your science experiment is our DIY. Electric pickles all around!

Through social media, you can be part of the science yourself. If you send a snap of an emoji to General Electric on Snapchat, they might send you an experiment to match. In fact, you can tap into #EmojiScience across all kinds of social media: Twitter, Facebook and Vine too!

What emoji do you want Bill Nye’s team to experiment with? Let us know in the comments!

Katelan Cunningham
Katelan is a tech junkie obsessing over all things startup and design. She has entirely way too many apps on her phone and is no stranger to binge-watching. She accidentally fell in love in Los Angeles and that’s where she currently lives, writes, tweets and grams.
science
Tech
science