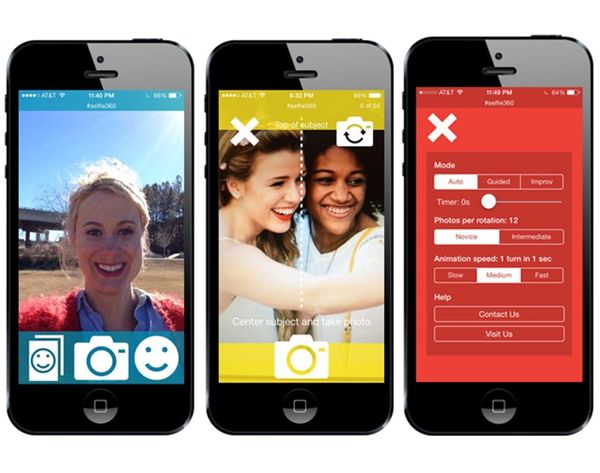 We’re back for another weekend edition of What’s App-ening?! This week was a big one to be an app — you could have been, like WhatsApp, bought for BILLIONS by the most famous man the Internet has ever made a movie out of or you could have been banished from the app store altogether for being SO popular, Flappy Bird-style. Either way, we have a few downloads that could be in the running to be the next best thing about your phone.

Selfie360: So you’ve totally perfected the selfie — but what about the selfie GIF? From Cycloramic, the same people who perfected the panoramic picture, Selfie360 guides you through the steps of creating the perfect animated self-portrait whether you’re a n00b or a modern day van Gough.

It may not be as easy to do as your usual Long Armed pics, but once you master it, all your friends will be trying to one up you on the app that’s like a glorious GifBoom, SnapChat explosion.

Flying Cyrus: Aw, is your touchscreen feeling a little ignored this week after Flappy Bird was just ripped from it? We’ve got a clever little knockoff to download that can fill the void. Instead of feathered friends, our favorite post-Disney Diva gets the chance to spread her wings and fly in the version that made it to the top of the download charts this week. Think it’s a metaphor for real life? Probably not. But it could be.

Samba: Everyone in the app-creating community is breathless to be the next WhatsApp (chill, guys, it’ll probably be a while) but this video messaging app just might be in the lead for the next billie we find in the couch cushions. It allows you to send and receive recorded reactions between you and your and friends in FaceTime-like bites.

What WhatsApp did for texting and SnapChat does for photo-sharing, Samba has the opportunity do for video-ing between friends. And if you don’t have an iPhone, #NoFOMO! You can still receive your Apple friends’ videos via SMS.

UltimEyes: We thought staring at screens was going to ruin our eyesight, but this neuroscientist-created iPad app promises it’ll “turn back the clock on your vision.” With promises that it’ll help you throw away your reading glasses, see better at night, in dim light and improve your vision for sports, we’re down to give it a try as long as it won’t blow air into our eye when we least expect it.

Okay, the app’s reviews aren’t hot, and those graphics. Oh, those graphics! But researchers who tested it out with baseball players found that the team’s vision improved throughout the course of the season while using it. And at zero dollars, we’re willing to give it a shot in between Netflix binging!

Poki: If you spend a lot of time online for work or play, Pocket was probably one of the best things that happened to you… and your productivity IF you’re an iPhone or Android user. Now, there’s a similar version for Windows Phones called Poki. And honestly, it’s way more beautiful.

A commuter’s dream, Poki lets you stash articles away to read later to build your own, personalized RSS feed that you can access offline. Poki makes reading interesting (think, the Pizza Hut BOOK IT! program for the future) by awarding you with badges for tagging articles or actually reading a tl;dr.

Postcard: If you have the words “social media” in your job title, download this immediately. This is the Social Media Assistant you’ve been waiting for your boss to get the funds to hire for you. Postcard helps you post your message to Twitter, Facebook and all of your social media networks at once — it even allows you to send it to your website. As handy as apps like these seem, we’re curious how many folks feel like it’s effective to post the exact same wording to all of your social platforms? Either way, this is a handy tool to have at your disposal when Hootsuite can’t cut it.

Cost: Free to download but if you work with multiple accounts get your company to sign off on the $4.99 expense for unlimited networks.

What was your favorite app you downloaded this week? Share below!

Lisa Raphael
In her past professional lives, Lisa has served the masses as the Editorial Director at Brit + Co, Bieber Whisperer at J-14, Golden Girls Fan Club Prez at Lifetime and Talk Show Host Understudy to Katie Couric. Now, she's taking on the sports world at The Relish, teaching Hairography 101 in her spare time and will forever be trying to fill the hole Zayn Malik left in her heart.
Apps
Tech
Apps