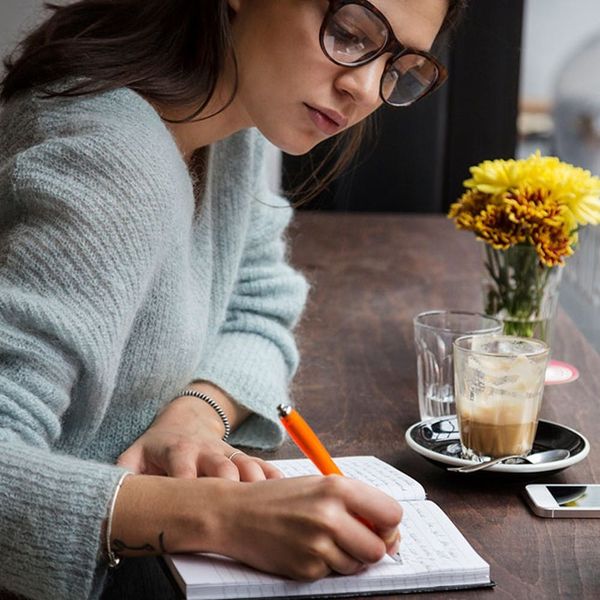 We’re always looking for new and interesting ways to spark our creativity. In fact, we’ve tried everything from taking unique DIY classes to testing out self-hypnosis to boost our inspiration. Now, we’re looking to some of the most creative minds of present day and throughout history. Here are 13 bizarre rituals that world-famous writers have used to help spark their creative juices. After all, if it was good enough for Maya Angelou, it’s good enough for us!

1. Gertrude Stein wrote in a moving car. Perhaps one of the most famous LGBTQ+ writers of her time, Gertrude Stein liked to write while lounging in the passenger side of her Model T Ford while her partner, Alice Toklas, drove around town. It may be a little bit of a challenge trying to quickly jot down notes on a bumpy road, but it’s worth a try.

2. Dan Brown is a fan of Inversion Therapy. Author of The Da Vinci Code Dan Brown believes that inversion therapy (i.e., hanging upside-down using a specialized table) is one of the best ways to relax so he can better concentrate on his work. Inversion therapy “does help,” Brown told The Guardian. “You’ve just got to relax and let go. The more you do it the more you let go.”

3. Agatha Christie loved to eat fruit in the bath. Famous for writing Murder on the Orient Express and other popular mysteries, Agatha Christie had a peculiar habit of eating apples in the bath while dreaming up her murder mysteries. While we’re not exactly sure why this worked for the acclaimed author, an apple a day *does* keep the doctor away…

4. Dr. Seuss wore a whimsical hat when he felt creatively blocked. Do you ever feel like what you’re wearing directly affects how creative or productive you are? Theodor Seuss Geisel (AKA the beloved children’s author Dr. Seuss) fancied going into his impressive collection of several hundred hats and trying on different headpieces until he felt creatively charged. We sure hope he found a good one when he penned The Cat in the Hat!

5. Charles Dickens only slept facing north. Everyone knows that getting enough sleep is critical to recharging your brain, but for the famous author of A Christmas Carol and Great Expectations, sleeping in the right direction was also key. Charles Dickens was notorious for carrying around a navigational compass with him at all times and he preferred to sleep facing north when possible. While this is a big no-no if you practice Feng Shui, it was a must for Dickens’ creative process.

6. Anthony Burgess invented a dictionary challenge. The famed author of A Clockwork Orange devised a clever way to spice up the chore of writing about a dull object — he challenged himself to use the words on one page of the dictionary to create his description. Grab a paperback dictionary the next time you encounter writer’s block and take the Burgess challenge to up your vocabulary game and make writing boring descriptions a little more interesting.

7. Virginia Woolf did her best work at a standing desk. While standing desks have increased in popularity ever since sitting was deemed the new smoking, this innovative desk has actually been used by famous writers for quite some time. Along with Virginia Woolf, Ernest Hemingway, Charles Dickens, and Thomas Jefferson all preferred stretching their legs while penning a new classic.

8. Maya Angelou escaped to a hotel room. The critically-acclaimed and beloved author of I Know Why the Caged Bird Sings and And Still I Rise had quite a peculiar method for getting into a creative headspace. Angelou is famous for paying for a hotel room by the month, and frequenting it from 6am to 1pm to write. She would also ask the hotel staff to remove everything from the walls. “I go into the room and I feel as if all my beliefs are suspended. Nothing holds me to anything. No milkmaids, no flowers, nothing. I just want to feel and then when I start to work I’ll remember,” Angelou said in an interview with George Plimpton.

9. Vladimir Nabokov used index cards. Most of today’s greatest literature is furiously typed on keyboards, but the author of Lolita preferred to do all of his writing on lined index cards. It’s rumored that this odd method helped him write scenes individually and reorder them whenever he pleased.

10. Lewis Carroll wrote in purple ink. In the 1870s, Oxford gave all members of its faculty purple pens to mark students’ papers; Charles Dodgson (AKA Lewis Carroll, author of Alice’s Adventures in Wonderland), who was working as an Oxonian math professor at the time, fell in love with the color. This led him to continue using purple ink while writing his later novels and letters. Go ahead and test out a new ink color — it could be all the creativity fuel you need to finish your latest project!

11. Haruki Murakami credits a running habit with bolstering his creativity. Japanese author Haruki Murakami takes fitness seriously, especially since he believes it helps calm his mind and puts him in a creative state for writing. He’s even written a memoir about his combined obsessions of running and writing (along with what it was like training for the New York City Marathon) called What I Talk About When I Talk About Running.

12. Truman Capote liked to lay down while he worked. Time to get cozy! Writing international bestsellers like In Cold Blood and Breakfast at Tiffany’s is definitely hard work, so Truman Capote liked to stay as comfortable as possible while writing. In fact, tons of famous writers did their best work while lying in bed or lounging on the couch, including Mark Twain, George Orwell, and Edith Wharton.

13. Victor Hugo liked to brainstorm in the nude. While we definitely don’t advise trying this one out in a public space, Victor Hugo famously liked to write naked. Author of The Hunchback of Notre-Dame and Les Misérables, Hugo was rumored to strip off his clothes, hand them to his servant, and lock the door. His garments were not to be returned to him until he wrote something substantial.

Would you try any of these wacky creativity boosters? Tweet us by mentioning @BritandCo.

Ashley Macey
Ashley Macey is a lifestyle freelance writer who loves all things fitness, wellness, and creativity. When she's not exploring her home in the Pacific Northwest with her dog Max, you'll probably find her curled up with a good book and some hot tea. Follow her daily jaunts on Twitter.
Books
Creativity
Books Creativity
More From Creativity