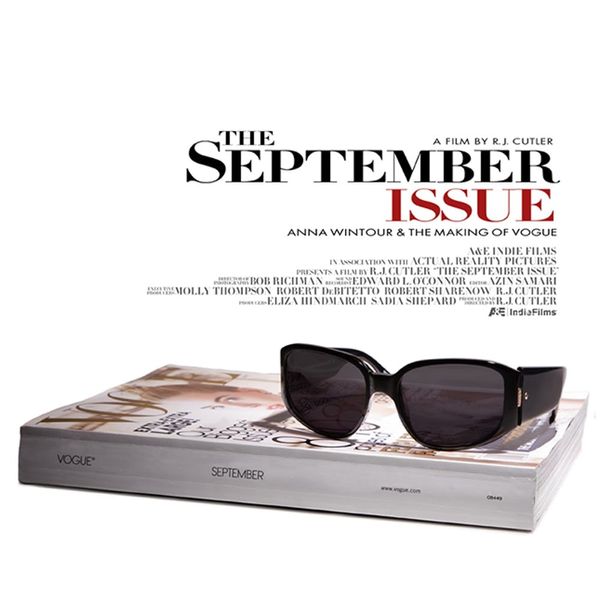 Fashion month might be coming to a close (don’t worry — Resort will be here soon enough), but that doesn’t mean the fashion festivities have to end there. From the Bryant Park tents to Lagerfeld’s infamous atelier, these 13 must-watch fashion documentaries will take you right into the heart of all the sartorial action.

1. Sweatshop — Dead Cheap Fashion: Fashion isn’t all glamorous parties and front row prestige. This Norwegian documentary follows three young Norwegians as they head to Cambodia to live the life of a textile worker over the period of a month, giving us a peek at what really goes into the making of fast fashion. The long work hours, pitiful pay and maltreatment of the workers is shocking, but the depiction is effective in making us stop and reflect on the fairness of the production process that keep us looking on trend. (Photo via Aftenposten)

2. The September Issue:Anna Wintour is fashion — period. So of course, we’ll jump at the chance to see what a day (or several, to be exact) in the life of the Vogue editor-in-chief is really like in the midst of preparing the most important issue of the year, aka the September issue. If you’ve ever wondered what goes into the process of putting together a major magazine, this is seriously a must see. (Photo via A&E IndieFilm, Actual Reality Pictures)

3. Scatter My Ashes at Bergdorf’s: It’s refreshing to hear designers, style icons and celebrities gush about anything that is, well, normal, not to mention when they talk about their struggles and hard work, which makes Scatter My Ashes at Bergdorf’s particularly intriguing. A cast full of fashion heavy hitters, including Karl Lagerfeld, Giorgio Armani, the Olsen twins, Marc Jacobs, Manolo Blahnik and Michael Kors to name a few, pay tribute to the iconic department store and give us a unique look at the emporium from behind the scenes. (Photo via Berney Films, Quixotic Endeavors)

4. Bill Cunningham New York: A man of 80 years of age may not be the first thing you picture when you imagine the person behind two popular columns in the New York Times Style section, but that’s just one of the things that makes fashion photographer Bill Cunningham so interesting. That, and his cheerful demeanour and love — bordering on obsession — of taking pictures that document the way people dress. The documentary profiles the beloved New York-based photographer who changed the fashion game, exploring his own personal world and observing his interactions with his subjects. (Photo via First Thought Films)

5. The Tents: The fashion calendar has expanded so much that at this point, you can pretty much assume that it’s fashion week somewhere. If that isn’t enough to satisfy your need for a fashion fix, then this lively history of New York Fashion Week, starting with the iconic tents at Bryant Park, should do the trick. Featuring behind-the-scenes footage and intimate interviews with some of the biggest names in the American industry, you’ll feel like you’re right in the middle of all the action. (Photo via Marcus K. Jones Productions, Future Pilot Productions, B Productions)

6. Chasing Beauty: Behind the glossy magazine covers and glamorous runway shows, there is a dark side to this industry. Chasing Beauty provides a behind-the-scenes glimpse at the world of modeling, including the sacrifices, challenges, emotional investment and physical requirements that are prerequisites for making it. The film follows everyone from the models themselves to photographers, designers and even makeup artists to capture the complex world of fashion, all while asking: What is beauty, and is it worth the cost? (Photo via Grand Entertainment)

7. Advanced Style: Age is just a number, and style has no expiration date. Advanced Style, based on Ari Seth Cohen’s blog of the same name, examines the lives of seven New York women whose unique personal style has molded their approach to aging. Through colorful personal portraits, the film explores conventional ideas about youth, beauty and aging through their own perspectives. (Photo via Dogwoof Global)

8. Fresh Dressed: Fresh Dressed offers a funky, fun portrait of hip-hop’s influence on fashion. The film, which premiered during the 2015 Sundance Film Festival, follows urban fashion’s history, touching on everything from Southern plantation culture to the South Bronx in the 1970s to Tommy Hilfiger embracing rap culture to boost his popularity. The addition of interviews with industry insiders like Kanye West, Pharrel Williams and Nas and archival material results in a passionate portrayal of a cultural phenomenon. (Photo via Mass Appeal)

9. Mademoiselle C: What happens when you mix Anna Wintour’s influence with covetable French style? You get Carine Roitfeld. The former editor-in-chief of Vogue Paris is as glam as they come, and seriously knows her stuff. She more or less ushered in a new age of French fashion, embracing sensual, daring style and listing icons like Karl Lagerfeld and Giorgio Armani as members of her inner circle. Mademoiselle C follows the woman herself as she embarks on a mission to launch her magazine, CR Fashion Book, giving us access to the inner realms of her crazy world of supermodels, photo shoots and fashion houses. (Photo via Black Dynamite Films, Tarkovspop, Elle Driver)

10. Diana Vreeland: The Eye Has to Travel: Between her quick wit, impeccable style and vision (plus quotes like this — “Unshined shoes are the end of civilization.”), Diana Vreeland, the influential fashion editor of Harpers Bazaar and Vogue editor-in-chief, was one of the leading authorities on fashion from 1936 up until her death in 1989, defining style for a new generation and daring to be different. The Eye Must Travel offers a look at the vivacious woman’s life, starting in Paris where it all began, to dazzling New York, where she truly made her mark. Just try and walk away from this film not feeling inspired. (Photo via Gloss Studio)

11. The Secret World of Haute Couture: Haute couture is all glamour and glitz, but who, other than celebrities, actually wears these incredibly beautiful and wildly expensive dresses? The BBC gives us an inside look at the little understood and hush-hush couture fashion industry with exclusive interviews with the clients themselves, members of a super secret club of women who buy the most expensive clothes in the world. Watch it here. (Photo via Foxtrot Films)

12. Lagerfeld Confidential: We all know who Karl Lagerfeld is, but what do we really know about the creative genius behind Chanel and Fendi? Lagerfeld Confidential profiles the notoriously private fashion designer, with Lagerfeld giving personal accounts from his upbringing and long, successful career in fashion. It’s rare that we hear directly from Lagerfeld himself, which makes the interview-like format of the film especially intriguing. Along with peeks of fashion shows, photo shoots and a slew of adoring celebrities, the film is chock full of Karlisms like, “I love change; I’m attached to nothing.” Unfortunately, the film was made pre-Choupette, so the famous feline is nowhere in sight. (Photo via Realitism, Backup Films)

13. Girl Model: This documentary exposes the modeling industry’s ‘supply chain’ between Siberia, Japan and the U.S., as told through the eyes of scouts, agencies and a 13-year-old model. We follow 13-year-old Siberian model Nadya Vall through all the ups and downs of the scouting process and her first modeling gig, juxtaposed with the day-to-day work of Ashley Arbaugh, the scout who found her. The film brings up a lot of questions and concerns regarding the industry’s working conditions and lack of regulations to protect the rights of models themselves. (Photo via First Run Features)

What are your favorite fashion documentaries? Tell us in the comments!

Libby MacCarthy
Libby MacCarthy is an urban planner turned writer with a love (bordering on unhealthy obsession) of all things fashion and beauty related. She lives for perfectly brewed coffee, farmer's markets, dinner parties and perusing impeccably designed boutiques. When she's not on the hunt for the latest trends, you'll likely find her plotting her next adventure or nose deep in a book. Libby currently splits her time between the East Coast and her adopted home of France. Follow her daily adventures on Instagram.
Netflix
Style News
Netflix
More From Style News