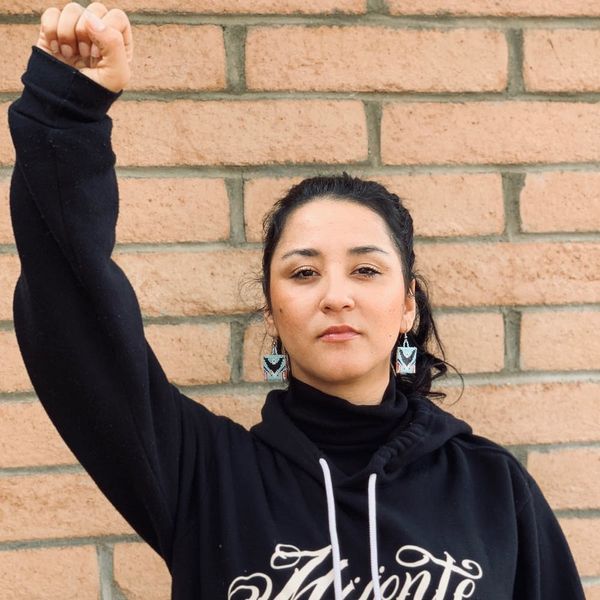 With Christmas just days away, social justice activist Alejandra Pablos is contemplating the important things in life. Last week an Arizona judge stripped the 33-year-old of her green card and ordered her deported, but she’s not thinking about that right now. This holiday season, which she typically uses as a time to get away and travel, she wants to stay close to home.

“My mom asked me, ‘What are you going to do?'” Pablos says in an interview with Brit + Co. “I told her, ‘I’m going to stay with you.’ My mom needs me. My mom has worked really hard to make it all about me…but now it’s on me to really spoil her and let her know that it’s going to be okay.”

We are here in Tucson supporting reproductive and human rights defender @AleLaPlebe today at her political asylum hearing. ✊🏽 #KeepAleFree pic.twitter.com/obe3SXOaEk

Pablos, born in Nogales, Mexico, was raised by her mother Rossy in Santa Ana, California, along with her brother Jesus. The family later moved to Tucson, Arizona, where they have lived since. Pablos had been a legal resident of Arizona up until December 12, when Federal Judge Thomas Michael O’Leary denied her asylum. Pablos and her legal team now have less than 30 days to file an appeal. If they lose the appeal, she will be deported to Mexico. (It’s important to note that her parents are naturalized citizens.)

It was in Arizona that Pablos first got involved in social justice issues. At 16, she began working for an after-school program, and she remained working with youths for several years. She later graduated from the University of Arizona with a Bachelor’s degree in Communication. It was around this time, however, that her life shifted and she made some decisions that would haunt her forever.

Eight years ago, Pablos was arrested and convicted on several charges, including driving under the influence and possession of drug paraphernalia. During a routine visit with immigration officials, she was ordered to spend two years at the Eloy Detention Center in Southern Arizona, one of the worst detention centers in the country, due to charges which are considered felonies under Arizona state law. She says that it was after those difficult years that she made radical changes in her life.

After being released, Pablos immersed herself completely in social justice work. Through her advocacy work with immigration and women’s rights through organizations such as Mijente, We Testify, a project of the Nation Network of Abortion Funds, and the National Latina Institute for Reproductive Health, she has become a known presence at protests. Like other undocumented activists who’ve been arrested and detained by the US Immigration Customs Enforcement (ICE), Pablos also became a target. And so her fight to remain in the US continues.

The momentum is building to #KeepAleFree, but only because we've rallied. Please join me, @AdvocatesTweets, @ConMijente, @NLIRH & more in signing & sharing this petition today!
https://t.co/L2oSZHTXsj

Despite her plan for some much needed R&R with family during the holidays, Pablo’s situation is urgent. Pablos says that because fighting for an appeal is costly, she and her supporters are fundraising, gathering signatures, and circulating the hashtag #KeepAleFree. Their last hope is that Republican Arizona Governor Doug Ducey will grant Pablos a pardon for her past convictions, which seems like a long shot; Ducey has gotten hundreds of requests for pardons and has only granted one.

Pablos says that while she is hopeful about her case, she is considering what the future holds.

“In my 33 years, this is the first time I have ever thought about what it would look like to leave. I don’t have any family support [in Mexico],” Pablo says. “All my family is here. But I am a member of the Nation Network of Abortion Funds and we have a sister fund network over there, and I’ve met some of them and bonded with them, so I guess I would start there.”