Why This Fancy NYC Restaurant Is Cooking Only With Food Scraps 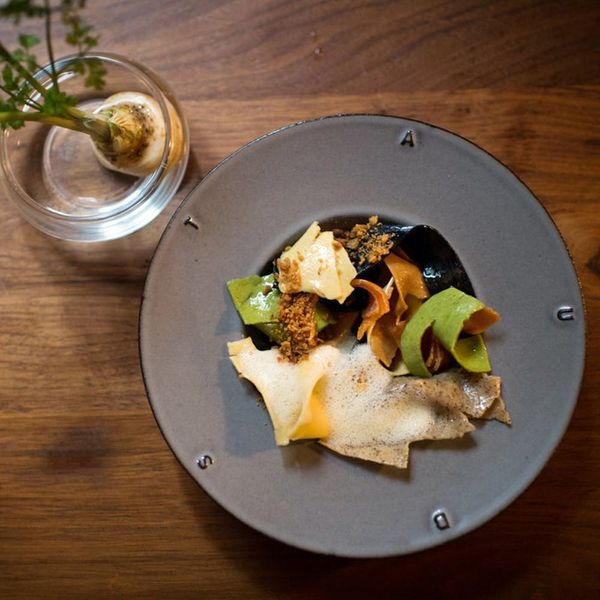 Leftover Chinese food and cold pizza are both right up our alley, but we never thought we’d have the option of eating leftovers at a swanky NYC restaurant. Chef Dan Barber took his farm-to-table practices to the next level to temporarily transform his restaurant Blue Hill into a pop-up eatery called wastED, where he cooks with food scraps.

Health inspectors, don’t fret. All of the leftover food is extra stuff from kitchen prep, not food scraped from patrons’ plates. Because that would be gross.

The project is an attempt to highlight the food we normally ignore and help cut down on serious waste. In Barber’s hands, those carrot peels and that bacon fat aren’t doomed to the garbage just yet. In fact, candles on the table have been made out of animal fat. And bacon candles are a DIY we could get behind.

For $15 per plate, you can order menu items that vary from bread made of odd bits of pasta dough to a “dumpster dive vegetable salad” made with bruised bok choy and fennel peelings. The folks at Cool Hunting even had dessert that consisted of a charred pineapple core alongside a dollop of lime leaf ice cream. Each night, Barber hosts a guest chef to make sure that the menu stays fresh. Even the tables are made from mushroom and corn waste.

Looking at what they’ve cooked up at wastED, we’re going to think twice before just throwing away our food scraps as we’re prepping dinner. Even if you’re not an all-star chef, you can freeze all of your usually-tossed veggie parts for a homemade veggie stock, and the same goes for meat parts. Overly ripe fruit makes for great preserves and stale slices of bread are basically croutons already.

The pop-up is only open through the end of March in NYC, but we think this could inspire some different practices in our own kitchens all year round.

Do you have any tips on eliminating food waste at home? We want to hear them all in the comments!

Katelan Cunningham
Katelan is a tech junkie obsessing over all things startup and design. She has entirely way too many apps on her phone and is no stranger to binge-watching. She accidentally fell in love in Los Angeles and that’s where she currently lives, writes, tweets and grams.
Recipes
The Conversation