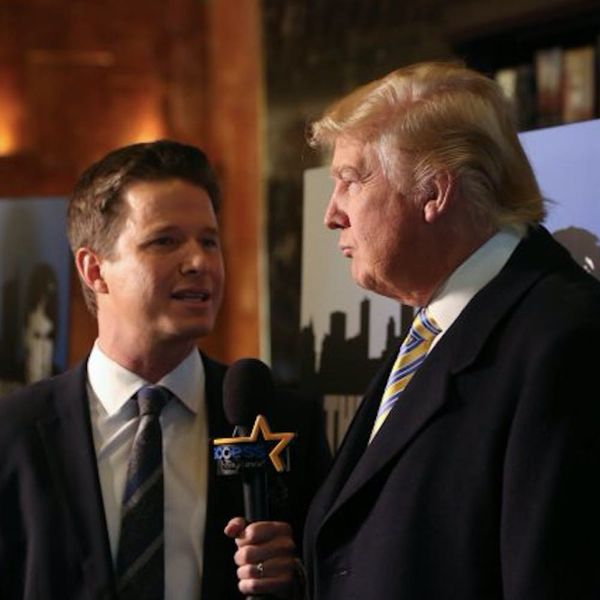 Billy Bush, the former host of Access Hollywood, was fired last year after behind the scenes audio leaked from an interview that Bush held with then-reality TV star, Donald Trump. The 2005 audio involved the now-president telling Bush that being famous has perks, and featured what may have been the most infamous soundbite from the entire 2016 election cycle: then-candidate Trump saying, “grab her by the p*ssy.”

At the time, Trump shrugged it off as “locker room talk,” but NBC fired Bush. In the months since, the onetime host has been mostly silent about what happened then, and what’s happened since — that is, until now. With the president recently telling White House insiders that the tape was faked  (even though it’s clearly real, and Trump himself verified its authenticity in 2016), Bush decided he could no longer be silent on the caught-on-tape moment that cost him his career.

Using The New York Times as his platform, Bush released a Sunday op-ed titled “Yes, Donald Trump, You Said That,” in which the former network star not only confronts President Trump’s alleged attempt at revisionist history, but also places blame on both himself as a host, and on NBC brass for allowing the cult of personality around the network’s then-biggest-star to continue unabated for so long.

“The key to succeeding in my line of work was establishing strong rapport with celebrities,” Bush writes. “I did that, and I was rewarded for it.” Bush admits that the on-air rapport he built with then NBC lynchpin host Trump helped promote him from New York-based reporter to LA-bound full-fledged host of Access Hollywood, and that between Bush, the seven-person crew, and every single executive at the network, no one was going to stop The Apprentice host from saying whatever he wanted.

Bush goes on to apologize to the victims of assault that have come forward, both those who have accused the president and other women, having to relive the trauma of their assault so publicly. And Bush says that it is important to remember that in the changing tide of time, that the issue of assault isn’t actually a women’s issue, but a men’s one.

“I have faith that when the hard work of exposing these injustices is over, the current media drama of who did what to whom will give way to constructive dialogue between mature men and women in the workplace and beyond,” Bush says. “Today is about reckoning and reawakening, and I hope it reaches all the guys on the bus.”

Bush’s allusion to “the guys on the bus” is in reference to not only himself, but the crew members present when President Trump uttered his infamous abusive phrase — a hope that more men can feel comfortable speaking up and out on behalf of all women and shutting down this type of behavior going forward.

“After everything over the last year,” he concludes, “I think I’m a better man and father to my three teenage daughters — far from perfect, but better.” Something everyone should strive for.

What are some of the ways men are becoming better around you? Tell us @BritandCo!