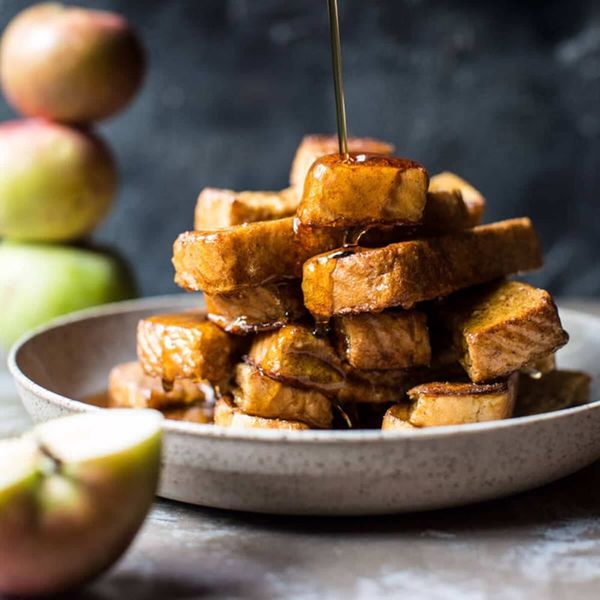 Anyone who loves breakfast knows the power of French toast. Soft and sweet, it’s a decadent meal made for cozy mornings that deserves its own holiday — oh wait, it already has one! Tuesday, November 28 is National French Toast Day, y’all. And there’s no better way to celebrate than to, well, eat *all* the French toast. But not just any French toast! Give your plate nostalgic vibes by preparing French toast sticks that pack the same amount of dessert-level flavor in smaller, dippable form. Are you drooling yet? Keep reading for 14 mouthwatering recipes that’ll inspire you to honor your inner kid who still loves ’em!

2. Gingerbread French Toast Sticks: Since National French Toast Day conveniently falls within the holiday season, it makes perfect sense to give the egg-dipped toasts a gingerbread-inspired kick. This particular recipe is vegan with traditional flavors, but it feels extra festive thanks to a rich and creamy gingerbread fondue on the side. (via Hot for Food)

3. Baked Oatmeal French Toast Sticks: If you like oatmeal, you’ll love these gluten-free baked oatmeal French toast sticks. The recipe is super flexible, but you can top it with a drizzle of your favorite peanut butter or a few blueberries for a bit of freshness. (via The Lean Green Bean)

4. Vegan Cinnamon and Sugar French Toast Sticks: This recipe doesn’t have any animal byproducts, but it does have tons of delicious flavor. For this one, you’ll need to make a flax egg, but don’t worry — it’s SO easy. (via Rabbit and Wolves)

5. Coffee Caramelized Croissant French Toast Sticks: What makes these unique is that they’re made out of croissant dough instead of just plain bread. Even better? The recipe calls for an instant coffee-infused maple syrup and an optional coconut whipped cream that you should definitely add. (via Half Baked Harvest)

6. Baked French Toast Sticks: Yep, these look as good as they sound. Made with Texas toast and topped with strawberries and a generous dusting of powdered sugar, these French toast sticks are a slightly healthier alternative to your average recipe. (via Iowa Girl Eats)

7. Pumpkin French Toast Sticks: Dipped in a pumpkin spice egg mixture and rolled in cinnamon sugar, these are fall’s answer to the breakfast classic. All you need is a PSL for the ultimate basic (but delish) meal. (via Life Made Simple)

8. Apple Butter Cinnamon French Toast Sticks: Baked on a buttered baking sheet, these are an orchard-inspired take on French toast. Loaded with cinnamon and creamy apple butter, they have a unique and fruity flavor you’ll want to douse in syrup. (via Half Baked Harvest)

9. Waffled Churro French Toast Sticks: Waffles, churros, French toast sticks — oh my! These are a portable, three-in-one breakfast treat. Get your waffle iron ready, because they call for waffles instead of regular bread. (via Savory Nothings)

10. Chocolate French Toast Sticks: Because this recipe calls for Pillsbury’s pre-made Original Breakfast Dough, it requires virtually zero prep time. Can you go wrong with chocolate chip-stuffed breadsticks? The answer is no, you definitely cannot. (via Pillsbury)

11. Corn Flakes French Toast Sticks: If you’re after a crunchy texture, add Corn Flakes. This recipe has the texture you’re looking for with a soft center to boot. So good! (via Damn Delicious)

12. Macadamia Nut Crispy French Toast Sticks: These get their crispiness from macadamia nuts. In lieu of maple syrup, they’re served with honey for a lighter flavor. (via Whitney Bond)

13. Nutella Fruit French Toast Cannoli: Slightly different than your average French toast sticks, these are shaped like sticks but are more like crêpes by design. Prepare your tastebuds, because each sweet bite contains fresh strawberries, blueberries, and melted Nutella. (via Cafe Delights)

14. French Toast Shooters: Hosting a brunch? For an Insta-worthy presentation, consider crafting shooters. Just fill the bottom of a shot glass with syrup and add a single sliver of toast to each. (via Love & Olive Oil)

(Featured photo via Half Baked Harvest)

Macy Daniela Martin
Macy Daniela Martin is a freelance lifestyle writer based in New York City. When she's not writing about all things weddings at Brit + Co, you can find her trying to up her social media game on Twitter and Instagram. Binge-read even more of her published work here: MacyDaniela.com.
Breakfast Recipes
Recipes
Breakfast Recipes recipe roundup
The Conversation