From “Non-Binary” to “Femme”: The Gender Buzzwords You Need to Know 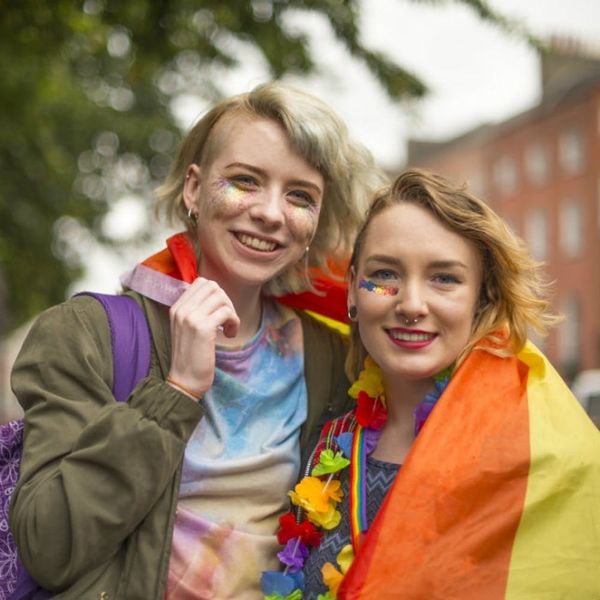 Allowing people to express themselves however they feel comfortable is one of the best parts of today’s culture. Sharing support for our LGBTQ+ friends and family has never been easier, but with language changing all the time, it can be hard to stay on top of the most respectful words to use when talking to and about queer people.

While we often talk about how to support LGBTQ+ people’s mental and physical health, small things like understanding the various definitions people are using, and understanding what common queer-friendly language means, can be a great barrier-breaker.

Here are some of the most common gender buzzwords you may have heard but might not understand.

Agender: An agender person doesn’t identify as any gender. Agender people fall under the non-binary spectrum (more on that in a bit).

Androgyne/Androgynous: A person who identifies with, or presents with, both male and female attributes.

Aromantic: A person who does not experience romantic attraction.

Asexual: A person who does not experience sexual attraction. People can be either aromantic or asexual or can be both.

Bigender: A bigender person experiences the feeling of two separate genders, like male and female or female and androgynous. Unlike gender-fluid people, bigender folks exist in two states, not a spectrum.

Cisgender: Cisgender folks are the opposite of a transgender person — that is, their gender identity matches their biological sex.

Dead name: This is the name that some transgender people change when they come out as trans. It usually denotes the assigned gender name that they were given at birth, and which should not be used.

Femme/Femme presenting: Someone who presents or expresses their gender in a feminine way. A femme person can be, but does not have to be, someone whose gender was assigned female at birth. The term can also be used for cisgender males who present in a more feminine manner.

Gender dysphoria: This term replaced the mental health diagnosis of “gender identity disorder” in the DSM-5 in 2013 and refers to the feeling of conflict between one’s gender and sex.

Gender creative: A person who customizes their gender expression and identity to include or exclude traditional gender ideals and expressions.

Gender identity: The internalized, personal sense of gender inherent in every person. This umbrella term covers every type of gender expression.

Gender-fluid: A person whose gender identity moves along the gender spectrum and is not fixed.

Intersex: Previously, intersex people were known as “hermaphrodites,” but the word fell out of favor and is now considered derogatory. Intersex people are born with both male and female hormones and sexual organs in any number of variations. Some intersex people are transgender, but some are not, and the two should not be confused.

Latinx: A gender-neutral term to replace Latino or Latina when describing people from Latin America. This can also be used for a group of mixed gender Latin Americans.

Mx.: Mx. is an honorific pronoun used to replace Miss/Mr./Mrs. and can be used for any person.

Non-binary and/or Genderqueer: NB folks experience gender outside of traditional gender roles. They may be male, but present female, or feel that they are any combination of varied gender expressions.

Pass/Passing: This is the ability of a queer person to pass through a straight or binary world without detection. Most commonly used to describe traditional feminine or masculine beauty standards when discussing transfolk, some queers pass as straight, such as bisexuals in heterosexual relationships.

They/their: A gender-neutral singular pronoun. While this can be used for NB people, it can also be used in place of he/she in any setting. Although we’re used to using they/their as a plural, this pronoun can, and always has been, an option for the singular.

Transgender: Trans folk have a gender identity that does not align with the sex on their birth certificates. It is not polite to describe a transgender person as formerly being their assigned gender, as they have always been who they believe themselves to be, regardless of gender assignment.

Ze/hir/hirs: Gender-inclusive pronouns that some people prefer, regardless of their gender expression.

When in doubt, it’s always important to remember that there is never any harm in asking a person what their preferred pronouns are. Some trans folks prefer gender-neutral pronouns, while non-binary folk may not mind being called he or she. Simply ask, “do you have a preferred pronoun?” if you don’t want to offend, and most people will be grateful you asked.

How do you support LGBTQ+ communities? Tell us @BritandCo!

Kat Armstrong
Kat has been a writer, social media maven and mom for longer than she's willing to admit. She's also spent time in front of and behind the camera, interviewing celebs, politicians and acting as a producer for fashion and artistic photography shoots. When she isn't writing for various orgs and publications, she's hanging with her kids, husband and French Bulldog, Peter, in Toronto, Canada.
LGBTQ
Gender Issues
LGBTQ
More From Gender Issues