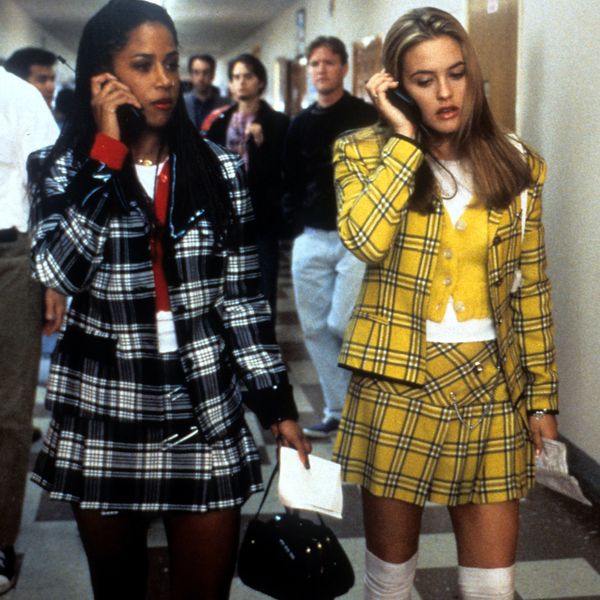 Getting fashion advice from our best gals for everything from a high-stakes job interview to a really hot date is second nature. That's why this Galentine's Day, we're celebrating all the fictitious dynamic duos who rep the importance of a fashionable friendship. Cue the edgy outlaws, '90s schoolgirls, and fancy schmancy Upper East Siders, because our fave on-screen BFFs are here to shape our stylish sensibilities. Scroll on to revisit these iconic pop culture pals and pay tribute to the wild and wonderful trends they wore — some of which we're still rocking today!

Thelma + Louise: In the outlaw drama Thelma and Louise, super babes Susan Sarandon and Geena Davis accidentally kill a guy and flee to Mexico — but not before crossing paths with a young Brad Pitt. They also happen to look *hella* dope doing it all in head-to-toe Western wear that includes mom jeans, vintage tees, bandanas, and cowgirl boots. (Photo via Getty)

Issa + Molly: Played by real-life multi-hyphenate Issa Rae, Insecure's Issa is not afraid to make fearless fashion statements. Camo, bold stripes, sequins, and mudcloth patterns are just a few of her faves, often worn all together. Her attorney bestie Molly (played by Yvonne Orji) elevates basic workwear to the sleekest of standards in cold shoulder tops, boss woman blazers, and perfectly fitted two-piece suits. These two on-screen besties continue to define what cool-girl style looks like in 2019 and we are here for it. (Photo via Merie W. Wallace/HBO)

Cher + Dionne: In the coming-of-age rom-com Clueless, two over-privileged Beverly Hills beezys strut their school's hallways wearing a lot of plaid co-ords, knee-high socks, and babydoll dresses. It's possible that Alicia Silverstone and Stacey Dash's characters might be the most recognizable style duos since they continue to inspire and influence fashion trends today. (Photo via Getty)

Romy + Michelle: En route to their 10-year reunion in Romy and Michelle's High School Reunion, Mira Sorvino and Lisa Kudrow feel like serious underachievers ... so they invent fake careers to fool their former classmates. And, like the broke DIY-ers they are, the pair dresses to impress throughout the film in their own hand-sewn — and very extra — outfits. Metallics, feather accents, fruit prints, chokers, and platform shoes defined the ladies' outrageously memorable style. (Photo via Getty)

Serena + Blair: SPOTTED! Best frenemies S and B looking like (they spent) a million bucks (on clothes). The Gossip Girl on-again, off-again BFFs (played by Blake Lively and Leighton Meester) spent six seasons giving the rest of us major high fashion outfit inspo while showing us exactly how not to treat our friends. When not in private school uniform, the girls rocked designer coats, handbags, gowns, and heels — constantly informing our layaway decisions. Many of Serena and Blair's iconic looks are still trendy today, like bold florals, berets, and pops of millennial pink.

Abbi + Ilana: ICYMI, these two Broad City queens are the definition of living your best outfit life on the bustling streets of NYC. Taking on the roles of urban trendsetters both on and off screen, Abbi Abrams (played by Abbi Jacobson) and Ilana Wexler (played by Ilana Glazer) are ballin' on a budget and always in search of a good sample sale. Ilana is all edgy rulebreaker in crop tops, studded jackets, and at least one dog sweatshirt, while Abbi plays it cooler in cardigans and utility jackets, with an occasional cameo in a certain blue bandage dress. (Photo via Comedy Central)

Jess + Cece: In New Girl, two childhood besties played by Zooey Deschanel and Hannah Simone navigate their early-thirties as a teacher and ex-model respectively. Their California girl aesthetics are complementary: Jess is total schoolmarm chic (all cutesy button-ups and pastel florals) while Cece takes a sexier route (in low-cut blouses and body-con dresses). (Photo via Getty)