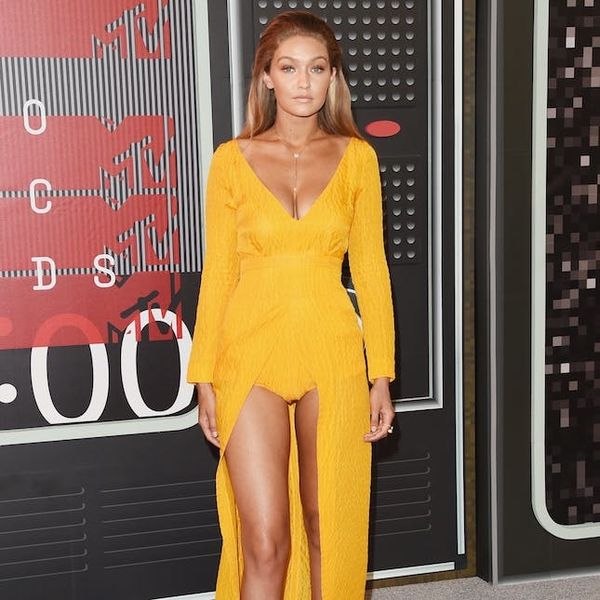 If you tuned into the VMAs last night, then you already know that it was one for the books. No surprise, Miley Cyrus nailed it with her superb (if not slightly cray-cray) hosting antics. Taylor brought her entire #girlgang as her special guests of the night and, as usual, Kanye shared some words of wisdom as he accepted the Video Vanguard Award from none other than T-Swift herself. Enough about the show highlights though — what we really want to discuss is the fashion. We’ve pulled together 12 of our favorite looks from the VMAs that you can replicate on your next outing.

1. ASOS Twist Knit Jumpsuit ($63): No stranger to flaunting jumpsuits on the regular, Kourtney proves yet again that a red-hot one-piece is just as chic as any dress that makes an appearance on the red carpet. You go, girl. (Photo via Jason Merritt/Getty)

2. Hadley Dress ($258): THAT slit. Gigi Hadid absolutely stunned with her long-sleeved, goldenrod-colored dress that not only had a plunging neckline, but put her gorgeous stems on display. You, too, can pull a Gigi with this midi-length dress from Reformation that takes on a slightly more toned-down vibe. (Photo by Jason Merritt/Getty)

3. Shine on Sequin Star Dress ($30): Our favorite model-turned-actress, Cara Delevingne, totally rocked it in a star-studded black mini dress. No accessories needed, because her frock was just that fab. For a similar look, this black cami dress with sequined stars would be perfect for a night of dancing. (Photo by Jason Merritt/Getty)

4. Lace Grid Dress ($252): It looks like Kylie Jenner pulled a solid Kardashian move by sporting a Balmain dress similar to the ones that Kim has worn during pre-pregnancy days. The verdict: She looked so good. For a fraction of the price, this beaded and sequined number above is guaranteed to wow on all fronts. (Photo by Frazer Harrison/Getty)

5. Peep-Toe Lace-Up Over-the-Knee Boots ($120): Let’s just say that Emily Ratajkowski has now got us verrry excited for fall weather. Her lace-up, over-the-knee boots brought a major #girlboss ‘tude to her dress with a daring slit. Make the look yours by pairing lace-up boots with cutoff denim shorts now and a maxi skirt in the upcoming season. (Photo by Frazer Harrison/Getty)

6. Floral Print Cross-Back Bralet ($16): Jeannie Mai’s two-piece floral combo had a lot going on — BUT in the best possible way. Allow this floral bralet from Missguided to do all the talking by mixing-and-matching it with easy-going separates. (Photo by Larry Busacca/Getty)

7. Vanessa Cut Out Slinky Midi Dress ($35): What’s black and sleek with cutouts allover? All signs point to this smokin’ LBD that Rocsi Diaz rocked with major panache. In a sea of LBDs that we’ve seen a million times (yawn), this one def stood out. (Photo by Frazer Harrison/Getty)

8. Eagle Rock Collar Dress ($115): Peter Pan collars at the VMAs? Can do, indeed — or, at least, Molly Tarlov sure did. If you’re digging the prim and proper look as much as we are, then this floral collared number from Emily Schuman’s Cupcakes and Cashmere line will do the trick. Style with flats or heels for an easy day-to-night look. (Photo by Frazer Harrison/Getty)

9. Black Glitter Box Clutch ($60): Mahogany Lox’s accessory of the night was so clutch. Literally. While this black glittery clutch from River Island isn’t adorned with any cool catch-phrases, it is ultra-sparkly — enough to get anyone’s attention at a black tie event. (Photo by Jason Merritt/Getty)

10. Lace Top ($30): Newcomer Tori Kelly kept it refreshingly simple by opting for an all-black ensemble. Besides her enviable curls and short shorts, her black lace top is what really kept us staring. We’re happy to let you know that Zara has a strikingly similar option that is sure to lend an ultra-feminine touch to any outfit. (Photo by Frazer Harrison/Getty)

11. Call Out Lace Dress ($58): FKA Twigs did not disappoint. We literally can’t take our eyes off of her barely-there, put-it-all-on-display peekaboo dress. While most of us probably won’t be showing that much skin anytime soon, we did uncover a similar (read: slightly more modest) alternative. Pull out your most lacy underthings — this black mini dress from Nasty Gal is ready to come out and play. (Photo by Frazer Harrison/Getty)

What was your favorite look from the VMAs? Let us know in the comments below!