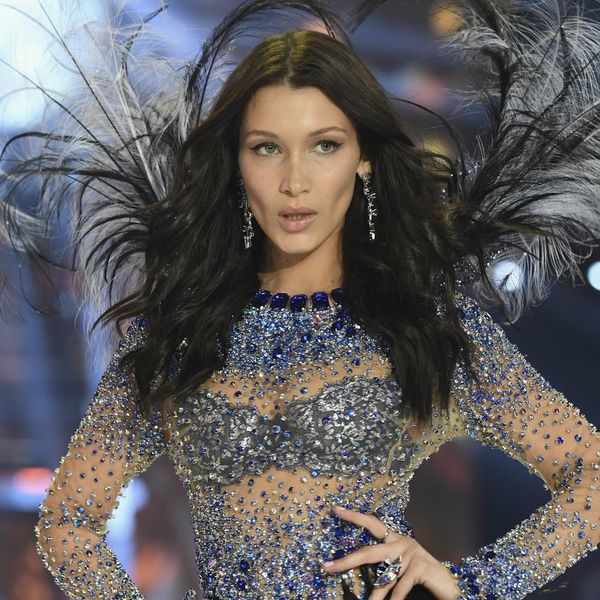 When it comes to the Victoria’s Secret fashion show, there are a few models that you just expect to see: Alessandria Ambrosio, Adriana Lima, Lily Aldridge, Candice Swanepoel and Behati Prinsloo, to name a few.

Get to know the show’s first-timers soon to be taking over your television tonight (10/9c), below:

1. Brooke Perry: Brooke has been selling you PINK panties all year, so we can only imagine how pumped she is to finally get her big moment on the runway as a reward. (Photo via Dimitrios Kambouris/Getty)

2. Bella Hadid: Arguably the most well known of all the show’s runway virgins, Bella (who stole some serious thunder at this year’s show with her special onstage moment with “ex”-boyfriend The Weeknd), made history with sister Gigi as being the first pair of sisters to walk together. (Photo via Pascal le Segretain/Getty)

3. Dilone: Dilone walked in not one, not two, but 44 runway shows this fashion week. In short? This Dominican beauty is blowing UP, so you might want to take note. (Photo via Julien M Hakimen/Getty)

4. Alana Arrington: This 17-year-old (yes, 17!) is still a junior in high school, yet somehow this Iowa native still found time to make her first trip to NYC this year to open and close shows for Altuzzara and BCBG — you know, totally normal teenager stuff. (Photo via Dimitrios Kambouris/Getty)

5. Camille Row: Camille is an *actual* French girl, so basically, she’s innately flawless. She also has home turf advantage with the show’s Paris locale this year, so we have a feeling she’s pretty much gonna slay. (Photo via Dominique Charriau/Getty)

6. Irina Shayk: She my have looked flawless on the runway, but Irina Shayk will soon be undergoing some major body transformations since (surprise!) she’s preggers. And not just with any baby: This is Bradley Cooper’s baby, people! (Photo via Pascal le Segretain/Getty)

7. Zuri Tibby: Zuri has already made history with VS for becoming the brand’s first black spokesmodel (really?!), and she’s also a huge proponent of wearing natural hair, so we’re dying to see what kinds of beautiful creations the team comes up with in between all those insane hair extensions! (Photo via Dimitrios Kambouris/Getty)

8. Xiao Wen Ju: Xiao also knows a thing or two about shattering stereotypes — she was the first woman of Chinese descent to head up the Marc Jacobs campaign, and now she’s diversifying the runway over at VS, to which we say HECK yes — less buxom, petite and racially diverse girls are sexy too! (Photo via Mike Coppola/Getty)

9. Megan Williams: Haven already taken on some of the modeling biz’s best jobs (we’re looking at you, Sports Illustrated), you might know have seen Megan’s killer bod before, but you’ve likely never seen it clad in Lederhosen — needless to say, she still looks amaze. Watch out world! (Photo via Pascal le Segretain/Getty)

10. Maggie Laine: If you weren’t feeling ever-so-slightly regretful about that extra slice of pizza you had last week already, what we’re about to tell you probbbabbbly won’t make you feel much better: Maggie Laine is only 18 years old. Who looks this babely at 18?! (Photo via Dimitrios Kambouris/Getty)

11. Georgia Fowler: Georgia Fowler is no stranger to the spotlight — in addition to appearing in campaigns for the likes of Banana Republic, H&M, French Connection and more, girlfriend has also been linked to infamous “modelizer” Leonardo DiCaprio. (Photo via Pascal le Segretain/Getty)

12. Herieth Paul: Tanzanian fashion model and current Ottawan Herieth has walked for Tom Ford, Diane von Furstenberg and Armani, and has been featured on a cover for Vogue Italia. We have a sneaking suspicion Herieth will be nearing supermodel fame in the very near future (girl is kinddddd of a knockout), so keep your eyes peeled for this one. (Photo via Pascal le Segretain/Getty)

14. Luma Grothe: Is there something in the water in Brazil, orrrrr? Luma, like her predecessors Giselle Bundchen, Adriana Lima AND Alessandria Ambrosio, all hail from the South American country. (Photo via Pascal le Segretain/Getty)

15. Lameka Fox: Gorge as she is, Lameka was a normal gal just like the rest of us prior to getting her big break for IMG: Girl was discovered on Instagram. WHAT? (Photo via Dominique Charriau/Getty)

16. Lais Oliveira: …And the Brazillians continue to reign on the runway! This goofy gal is also a native of the country. (Photo via Pascal le Segretain/Getty)

17. Jourdana Phillips: Jourdana Phillips (AKA Jourdana Elizabeth) underwent an ANTM-style transformation for the show — she reportedly not only chopped off all of her lush long locks, but dyed them blonde to boot. You go, girl! (Photo via Pascal le Segretain/Getty)

18. Keke Linguard: Keke may be a total babe, but she’s not all high heels and skimpy lingerie: Her modeling profile cites her as bit of a sports fan with a penchant for basketball. (Photo via Julien M. Hakimen/Getty)

Which newbie are you most excited to see strut their stuff? Chat about it @BritandCo.

Nicole Briese
Nicole is the weekend editor for Brit + Co who loves bringing you all the latest buzz. When she's not busy typing away into the wee hours, you can usually find her canoodling with her fur babies, rooting around in a bookstore, or rocking out at a concert of some sort (Guns N' Roses forever!). Check out all her latest musings and past work at nicolebjean.com.
lingerie
Entertainment
lingerie Victoria's Secret
More From Entertainment