Meet the Woman Who Makes the Victoria’s Secret Angel Wings 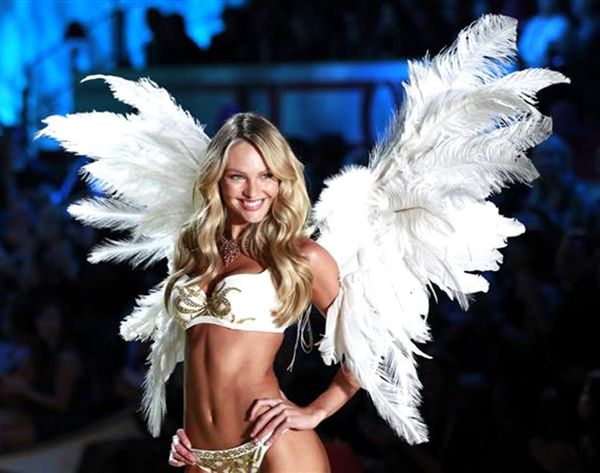 Besides the models and musical performances at the annual Victoria’s Secret Fashion Show, everyone’s got their eyes on the Angel Wings. There are a select group of eight superbabes who get to put on their wings each year, and at 2014’s show, the group is made up of VS veterans: Adriana Lima, Alessandra Ambrosio, Behati Prinsloo, Candice Swanepoel, Karlie Kloss, Doutzen Kroes, Lily Aldridge and Lindsey Ellington. Cool and all, but let’s talk about the most important woman behind the show-stopping accessory — meet Victoria’s Secret wing-designer Marian Hose, aka “Killer.”

Killer and her design team start off with submitted sketches for these extravagant masterpieces. The wing-design team create their own interpretations on the initial sketches, then use a bit of tech to make each just right for the models. They project them onto a screen and a model stands in so they can bring them up to scale.

After sizing is figured out, the construction process begins, and the wings start to take shape in the form of feathers, lace, leather, glass beads and Swarovski crystals (duh).”It takes about a week just to make the frame [but] for a more intricate wing it takes much longer. For something beaded, for example, we have an entire team just working on that part of it,” Killer says in an interview with Huffington Post. The finished product can weigh in at about 20 pounds.

While we’re majorly impressed with the particularly unique job title of “Wing Maker,” Killer naturally has an impressive resume in costume design. Her former workplaces range from Radio City Music Hall to the Metropolitan Opera. What we wouldn’t do to talk Halloween costumes with her…

Until then, we can’t wait to see the VS Angels werk the runway in their gorgeous Angel Wings alongside Taylor Swift, Ariana Grande, Ed Sheeran and Hozier on December 9 on CBS.

Are you hosting a VS Fashion Show viewing party this year? Tell us what you’re looking forward to seeing this year in the comments!

Maureen Luyun
Maureen is a writer and brunch enthusiast laughing way too loudly in Texas. If she isn't voraciously turning the pages of the latest celebrity memoir, she's probably picking up a new skill to use for a DIY project. Shopping (online and off) is her cardio, and as an avid advocate for the handwritten note, she loves to send (and receive) snail mail. Like Kanye West once tweeted, sometimes she gets emotional over fonts.
lingerie
Fashion
lingerie
More From Fashion