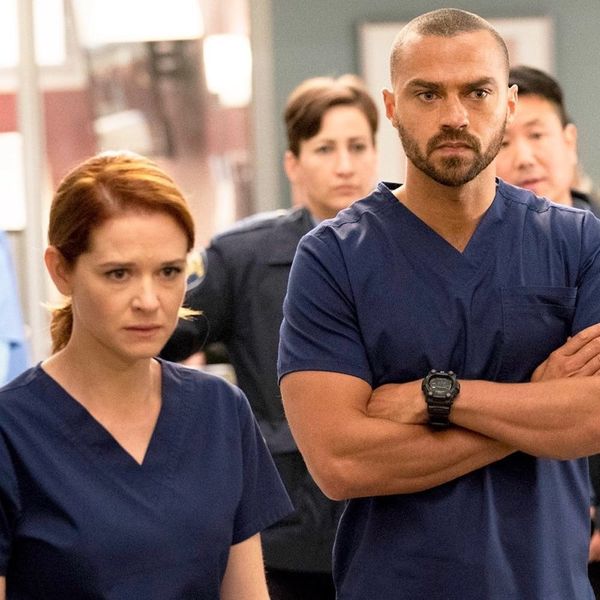 If you thought Grey’s Anatomy might give us a break after last week’s intense episode, think again. We picked up where we left off, with Jo’s ex Paul having been brought into the ER after an apparent hit-and-run. Given all that had happened, it seemed like Jo, Alex, or Jenny might have been responsible, but that turned out not to be the case — it was a drunk driver. Jo and Jenny also realized that Paul wasn’t as injured as they thought he was and had only suffered a mild concussion. But Jenny did finally get to tell Jo that she had experienced similar abuse, and Jo, relieved that she had gotten though to her, decided to join forces with Jenny to take Paul down in court.

We’ll get to the rest of this later, but first, let’s discuss what else happened in the episode, because it was a heavy one all around. April treated a pregnant woman, Karen, whose husband turned out to be her ex — the one she left at the alter back in season 11, when she eloped with Jackson. Don’t you know EVERYONE comes to Grey-Sloan Memorial when they need something? Anyway, their reunion was as awkward as you might expect, and it just got more awkward as the episode went on. After Karen had her baby, her liver started to fail and the rest of her organs soon followed. April was a mess, which is understandable, and after it was all over, she ended up drowning her sorrows at Joe’s. Vik the Intern also happened to be there, and…well, you can guess what happened next. I mean, I don’t blame April, but I hope she finds some happiness soon.

In the other big medical case of the night, a 12-year-old boy named Eric was brought into the hospital after police shot him while he was trying to get into his own house. They assumed, because of the color of his skin, that he was breaking in, but really he just forgot his keys.

Tragically, he died from his injuries, which spurred Jackson to give an impassioned lecture to the cops about unconscious bias. It was a heart-wrenching moment, made even more so when Bailey and Ben had to sit down with Tuck and give him “the talk” about what he should say and how he should respond if he’s ever stopped by police.

Elsewhere in the hospital, Jenny decided to confront Paul, who responded (not surprisingly) with anger. But in his anger, he tripped over the tubes he was still connected to and hit his head on the edge of the hospital bed AND the floor. This gave him another concussion before the first one had healed, which, in his case, resulted in brain death. The person with the decision to take him off life support? Jo, who was still legally married to him. Talk about stressful decisions. Sure, Jo wanted Paul dead, but there’s a difference between something actually happening and just thinking it’ll happen. But when Jenny got upset that Paul wasn’t going to be able to sit in prison for the rest of his life and pay for all the torment he put them through, they decided to turn the situation around and donate his organs to people.

Yes, Jo’s a free woman. And now she and Alex can actually get married, and Jo can live without her abuser hanging over her head. It’s good that she can finally move on, and I hope this means she can find happiness. Someone in this hospital needs to.