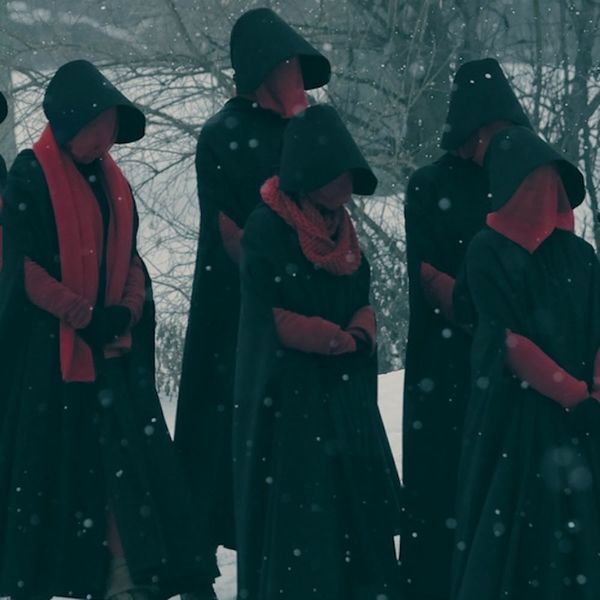 International Women’s Day is about a lot of things — including recognizing the strength of the women around us and being aware of the rights we need to protect. And perhaps nothing on TV makes the importance of that effort more apparent than The Handmaid’s Tale, which just dropped a dark and rebellious teaser for season two.

In the first season, we saw the main character, Offred (played by Emmy and Golden Globe-winner Elisabeth Moss), serving her commander (Joseph Fiennes) and his wife (Yvonne Strahovski) in a dystopian future where she and other handmaids like her (such as the women portrayed by OITNB‘s Samira Wiley and Gilmore Girls‘ Alexis Bledel) are forced to bear children for infertile couples.

Now, in season two, with Offred carrying a child she’s determined to keep, she has joined with other women to rebel against the rules and escape their horror-filled home of Gilead, formerly known as America. Their goal is to reach the refugee camp in Canada, a safe haven for those running from the terrors they’ve known. However, as the teaser shows, nothing in this new world comes without nightmarish struggles.

“Wear the red dress. Wear the wings. Shut your mouth. Be a good girl,” we hear Offred say as the teaser flashes through several bone-chilling scenes of clenched fists, a noose, terrified and tormented faces, and the handmaid covered in blood.

The first two episodes of The Handmaid’s Tale‘s second season will premiere on Hulu on Wednesday, April 25, with new episodes debuting each Wednesday after that.

Will you watch season two of The Handmaid’s Tale? Let us know @BritandCo!

Desiree O
Desirée O is a ‘Professional Bohemian’ who loves anything and everything related to the arts, entertainment, and pop culture. She ADORES being a ‘Newsy’ for Brit + Co, covering all of the latest tidbits of awesomeness that you want to read about. When she’s not writing, she’s either making messy art, going on long adventurous walks with her camera, or poking around over at bohemianizm (http://www.bohemianizm.com/). You can find out about Desirée O and her work at http://DesireeO.com/ or follow her on Twitter @DesireeO.
Streaming
TV
Streaming
More From TV